Planned Parenthood Action (PPact) decided to commemorate Human Rights Day on Tuesday by tweeting two of the most mind-boggling tweets they have ever dared to tweet. The abortion corporation, which is responsible for 40 percent of abortions in the United States, makes millions off of the deaths of an entire class of human beings – and they have the gall to tweet in support of equal human rights. Either they don’t see the cruel absurdity of their tweets or they just don’t care. Both are problematic.

PPact’s first tweet in celebration of human rights on Tuesday was a blatant lie. “Human rights for ALL. No exceptions,” the tweet reads. Understandably, they had to hide some of the replies they got in order to protect their irrational way of thinking.

The second face-palm worthy tweet of the day was actually a retweet from the United Nations in which the UN quoted Nobel Peace Prize winner Nadia Murad. Murad is a Yazidi survivor of genocide and human trafficking.

“All people are equal and entitled to the same human rights, and we must challenge the notion that certain groups matter more than others,” said Murad. 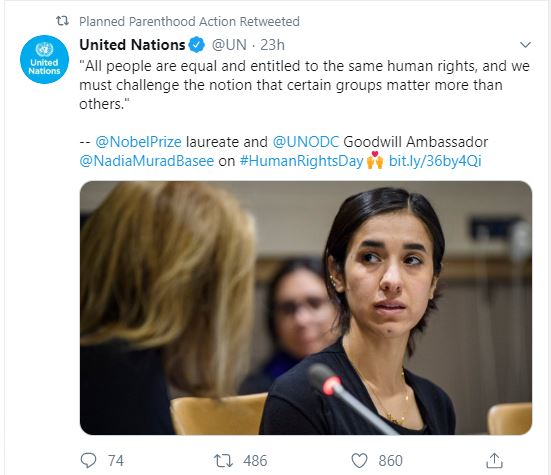 Apparently PPact wants to pretend they agree, as they retweeted the quote and included a praise emoji. Image is everything to the abortion giant.

The truth is that Planned Parenthood Action works every single day to deny the most basic human right to an entire group of human beings. It’s what they get paid to do. Planned Parenthood Action Fund states on its website that it fights “to protect” abortion. It does this by donating to pro-abortion political candidates and promoting policies that keep abortion legal at all stages of pregnancy. It supports abortion up to birth on babies who are capable of surviving outside the womb.

Either PPAct is really that oblivious to the hypocrisy of their tweets… or they don’t care. While PPAct was busy playing compassionate supporter of human rights while denying the humanity of preborn human beings on Human Rights Day, Planned Parenthood abortion facilities were busy at work killing 911 preborn children.