Parents in Tacoma, Washington, are reportedly furious after a Planned Parenthood flyer promoting sex among pre-teen children was distributed at Stewart Middle School. Yet in a statement provided by Tacoma Public Schools to the Post Millennial, the flyer was not part of the curriculum and should never have been sent home with students.

Eric Hogan, assistant director of secondary education at Tacoma Public Schools, told the Post Millennial that the flyer was only distributed to students at Stewart Middle School, and apologized for the mistake. “Previously, Planned Parenthood taught within our schools and supplied the flyer which was distributed to students,” his statement read. “We discovered a binder of curriculum materials was left behind for an incoming teacher to use for this year, and the flyer was in the binder. Not realizing the flyer wasn’t approved material, the teacher sent it home with students. Corrective action has been taken with this employee.”

Hogan added, “Planned Parenthood is no longer giving presentations within our schools.”

Copies of the flyer were posted on social media, and the information was beyond disturbing. Under the title, “Age of minority & consent for sex,” students were told “it is not a crime” if they have sex as young as 11 years old, as long as their sex partners are no more than two years older than they are. 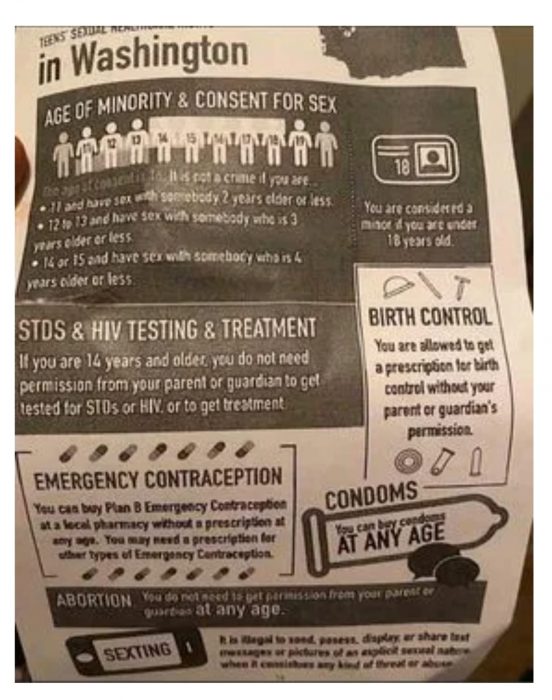 It is not a crime if you are…

… If you are 14 years and older, you do not need permission from your parent or guardian to get treated for STDs or HIV, or to get treatment…

The flyer also explained how students could obtain condoms “at any age” and Plan B, explaining that they didn’t need their parents’ permission for that, either. The only sexual behavior discouraged on the flyer was sexting, which Planned Parenthood noted is illegal in Washington. 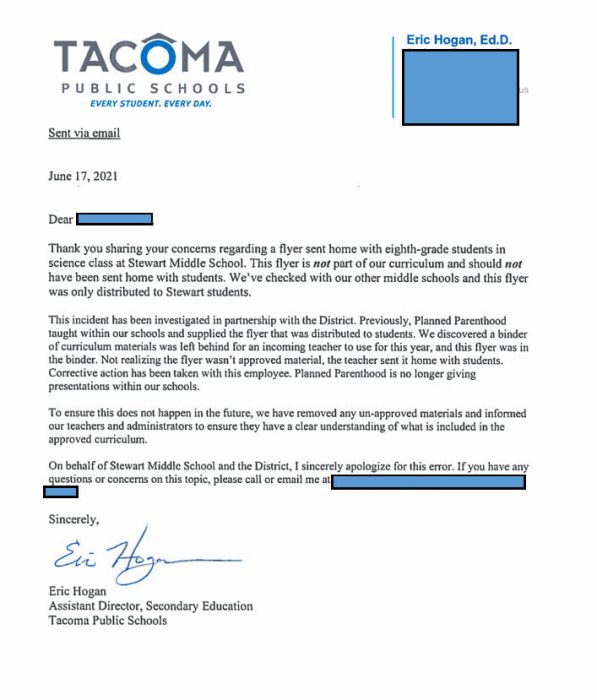 Meanwhile, the flyer failed to point out that the consent laws in Washington merely mean the state will not prosecute; as the state points out, “[a]ge is just one of many factors involved in consent.” Emotional and psychological development should be considered as another factor of consent, which for an 11-year-old, raises many red flags. The preteen stage is a time when children are experiencing a lot of hormonal changes, and begin to not only desperately seek independence from their family, but begin to strongly rely on their peer groups instead. This, while perfectly normal, can easily cause pressure and coercion to have sex, with a child feeling that they must have sex in order to be accepted. Adding Planned Parenthood’s propaganda doesn’t help.

Encouraging students to use birth control without their parents’ knowledge is also deeply problematic; an 11-year-old is unlikely to know if they have a pre-existing condition which could make hormonal birth control in particular more dangerous. But even more disturbing is the possibility of Planned Parenthood using birth control as a way to get secure pre-teens as future customers, for services other than just contraception.

Former Planned Parenthood manager Ramona Treviño told 40 Days for Life that “contraception and abortion are two sides of the same coin,” and that selling promiscuity to young people creates a market for abortion.

“The more people use birth control and adopt a contraceptive mentality, the higher the odds that they’ll seek an abortion,” she explained. “Because, let’s face it, if they’re using birth control, a child is not part of the ‘plan.’ Abortion is the backup, so to speak, for contraceptive failure, misuse, or lack of self-control.”

This blatant effort to promote sex to children, who are too young to truly understand or consent, should never be permitted. Yet too often, Planned Parenthood is still welcomed in schools across the country, grooming them to become future paying clients who will learn to rely on the abortion corporation.