While the oft-repeated pro-choice mantra is that abortion should be “between a woman and her doctor,” Planned Parenthood and the ACLU are suing the state of Maine over a law dictating just that.

Planned Parenthood and the ACLU believe requiring that a physician must be the one to commit an abortion is a “restriction” which is “medically unjustified,” because it would, according to the ACLU, “block[] qualified nurse practitioners and nurse-midwives” from committing the procedure. The group’s key objection seems to be that this law would restrict abortion access to a large extent. In a press release, the ACLU of Maine writes:

This law significantly restricts patient access to abortion services in Maine, and prevents some Maine women from receiving an abortion from their regular primary and gynecological care provider (who, in many cases, is an APRN). Today, while medication abortion is available via telemedicine in some cases, there are only three publicly accessible health centers in Maine where a woman can get an in-clinic abortion. If this medically unjustified restriction is blocked, that number will increase to at least 18 locations across this large, rural state.

In its press release, the ACLU of Maine quotes “experts” in support of allowing non-physicians to commit abortion — but, of course, most of these quoted experts are employed within the profitable abortion industry.

Townhall.com notes that Maine’s law is actually not at all unusual. In fact, “[l]aws requiring that abortions be provided only by medical doctors are currently on the books in 41 states, but Planned Parenthood is hoping to change that.” In the same article, Dr. Raegan McDonald-Moseley, chief medical officer of Planned Parenthood, is quoted as saying that such “outdated restrictions… don’t help keep women safe, and aren’t grounded in thorough research or the best science.”

But for an organization with a pro-abortion agenda, which takes the lives of more than 328,000 preborn human beings every year (according to its latest annual report), Planned Parenthood might want to use caution when invoking the idea of “the best science.”

But what else could be behind this fight being waged by Planned Parenthood, an organization which purports to care about women’s health, while eating away at every single possible regulation of a procedure that has uterine perforation and even death as its potential risks?

Could it be that finding an actual medical doctor willing to commit abortions is more difficult than we’ve been led to believe? Circuit-riding abortionists — physicians who travel from abortion facility to abortion facility for the sole purpose of committing abortions — are quite common. Live Action News’ Susan Michelle-Hanson wrote in 2015, “… [T]hough the National Abortion Federation (NAF) insists there is not a provider shortage, they also say the majority of providers are in urban areas….” This leaves circuit-riding abortionists to fill in the gaps for the sake of “abortion access.” But if non-physicians are allowed to commit abortions — despite the fact that they are clearly not trained as extensively as physicians — then this could alleviate some of the abortion industry’s provider problem.

But what could be a potential windfall for the abortion industry would put women at greater risk of injury.

In what other realm of business does this bizarre standard pass muster? Do you let a butcher build your house because you “deserve access to” a carpenter? Do you let a nurse do your bypass surgery because you “deserve access to” a cardiologist? Nowhere else does “we really need it, therefore let unqualified people do it” make sense – and the mentality doesn’t make sense here, either. In fact, it’s downright dangerous.

Abortion is already fraught with risks. Take a look at this list of just a handful of possible complications: 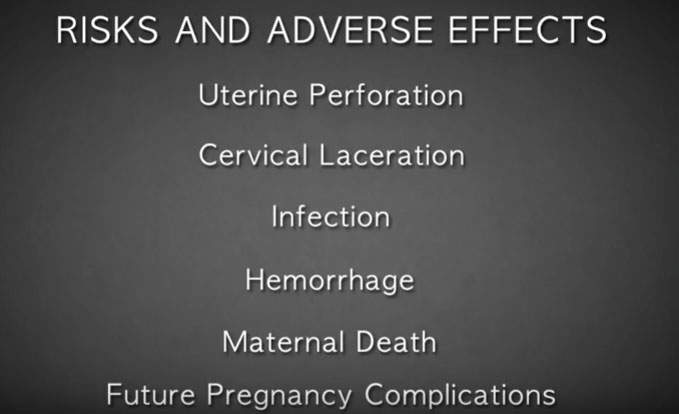 Fighting all regulatory and safety laws, and fighting to allow an already risky procedure to be done by someone with much less medical training than a doctor, is not demonstrating proper care for women.