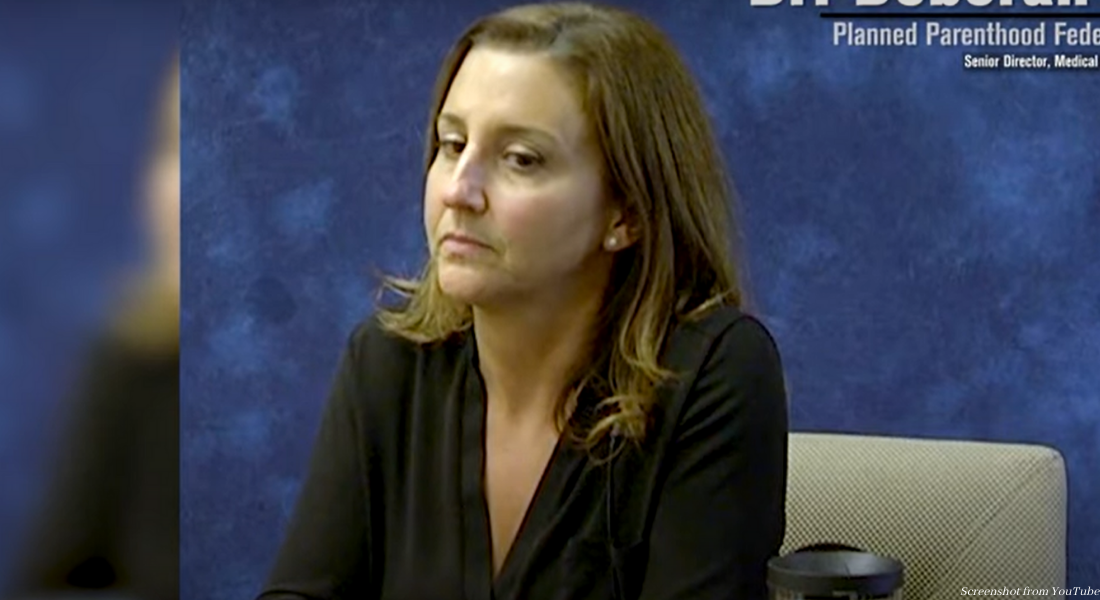 A new video from the Center for Medical Progress (CMP) once again reveals that abortionists at Planned Parenthood have been committing illegal partial-birth abortions while harvesting the body parts of preborn children.

Nguyen, in reference to a prior video where she said sometimes the preborn baby is “almost too intact,” said she meant that “all of the limbs were completely attached to the torso.” She also admitted that an aborted child may come out still having all of his limbs and possibly even his head still attached to his torso. Nguyen also said that her affiliate does not use digoxin to kill preborn babies; while it’s not clear if they specifically abstain from digoxin for the purpose of harvesting organs that are usable for research, body parts obtained from babies killed using digoxin cannot be used for research.

Planned Parenthood instructs its abortionists to describe their “intent” in medical records, and to check off a box allowing them to skirt federal law outlawing partial-birth abortions. In a previous video, Nucatola said, “The federal abortion ban is a law, and laws are up to interpretation. So there are some people who interpret it as, it’s intent. So if I say on day one, ‘I do not intend to do this,’ what ultimately happens doesn’t matter.” (emphasis added)

In her deposition, Nucatola claimed her video remarks were merely an explanation of how some lawyers interpret the law — and yet, Nucatola and Nguyen both admit to committing these gruesome procedures, leaving the aborted child’s body intact. Nucatola had previously testified before Congress that no Planned Parenthood abortionist would purposely commit an illegal partial-birth abortion. Under oath, her story changed.

In a previous undercover Center for Medical Progress video, Nucatola was recorded discussing how she altered abortion procedures to ensure she could harvest intact organs like hearts, lungs, and livers. In her deposition, while initially trying to avoid the question, Nucatola eventually did admit that she altered abortion procedures, saying she did so “if I was aware that it was a donation case, yes.”

Nucatola was then instructed to view her previous statements from the CMP video, in which she discussed moving the baby from head-first to breech positioning using ultrasound guidance to aid in aborting the baby with organs intact. She initially denied doing this herself, but eventually confessed, “I was referring to PPLA… [y]es, including me, I worked at PPLA.”

On fetal tissue consent forms given to patients, women were specifically told the abortion procedures committed on them would not be altered to better accommodate the tissue donation. These women had no idea what was actually happening.

Gatter said in her deposition that there was “lively discussion” among Planned Parenthood employees about whether it would be permissible to change the “techniques” in the abortion process. “We were still debating that in Los Angeles when I left, but by the time I met Mr. Daleiden and his associates, I had evolved in my thinking to think that changing the technique to get better tissue was allowed,” she said.

In her previous interview with CMP, Gatter discussed her thoughts that changing the “technique” did not affect the “procedure” or the “method” of the abortion. But according to the Center for Medical Progress, the law stipulates that there should be “no alteration of the timing, method, or procedures used to terminate the pregnancy” in order to better harvest the tissue of aborted children. In other words, CMP believes Planned Parenthood makes artificial divisions which the law itself does not make, in an attempt to provide allowances for an illegal act.

“Planned Parenthood reflexively proclaims innocence to the public and to a compliant establishment press, but when Planned Parenthood abortion leadership is placed under oath, they testify to crimes against women and infants,” David Daleiden, CMP founder and project lead, said in a statement. “Criminality in the national taxpayer-funded abortion industry will continue to spread unless federal authorities hold them accountable once and for all.”