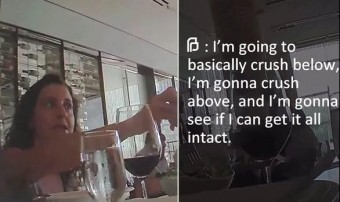 The infamous Planned Parenthood abortionist seen eating a salad while discussing which fetal organs are most desired by researchers in undercover footage filmed by investigators from The Center for Medical Progress was caught in a lie while on the stand during the civil trial of Planned Parenthood v The Center for Medical Progress (CMP), as noted in a recent recap of Wednesday’s court proceedings.

Operation Rescue reports that an anonymous source in the courtroom has stated that Dr. Deborah Nucatola, former Medical Director for Planned Parenthood Federation of America, testified on Wednesday that she and her family were “damaged” by the CMP videos. She said she hired a bodyguard on-and-off for a period of six months because she feared for her family’s safety, and after receiving a threatening voicemail decided to set up a screening system on her phone.

During cross-examination by defense attorney Paul Jonna, however, he asked her about those damages and then reminded her of statements she made in a previous deposition. In that deposition, Nucatola said the release of the videos was “no big deal” and that it “did not damage” her. She also said under oath that she “did nothing wrong.”

“I don’t care if these videos are released,” she said. “There is nothing wrong with what I said.”

The inconsistency of her two testimonies allowed the defense to challenge her credibility — to impeach her. It showed that she cannot be believed.

After she was impeached, Judge William Orrick III, who has to this point not allowed the showing of CMP videos in court, allowed an uncut video of Nucatola to be shown to the jury. In the video, (seen below) Nucatola can be seen having lunch with CMP’s undercover journalists and discussing the harvesting of liver, lungs, hearts, muscle, and heads from the bodies of aborted children.

Operation Rescue’s anonymous courtroom source said some of the jury members appeared to be crying while listening to Nucatola eating her food while casually discussing the way she aborts children so their organs can be better harvested.

“The jury was stunned,” said the anonymous source. “It was the first time during the three-week trial that they had seen any of the debated video. It was a game-changer and a huge victory for the pro-life defendants. Planned Parenthood’s star witness turned into a star witness for the defense. It could not have been a better day.”

Nucatola also told the court that she commits between 50 and 500 abortions per month — an average of about 200 each month. Operation Rescue concluded that if that number is consistent over her 21-year career as an abortionist, that would mean she is personally responsible for aborting over 50,000 preborn children.

Nucatola also said she commits abortions past the point of viability up to 24 weeks gestation. Premature babies born as early as 21 weeks can survive when medical assistance is provided. Coupled with the fact that Nucatola has admitted to not using digoxin to stop the fetal heart before inducing labor, viable children may possibly have been born alive during these abortions and either killed or left to die. In fact, practicing abortionist Dr. Forrest Smith testified during a hearing for the CMP civil trial told the court there is “no question” babies are being born alive during abortions.