“He is very obviously human, not a cluster of cells, not a lump of tissue, not a blob of unformed flesh.”

Felicia Cash and her husband struggled with infertility for 13 years before they decided to become foster parents to a group of three young girls, sisters, whom they adopted two years later. But much to their surprise, Felicia told Live Action News, “[T]he morning after we signed their adoption papers in court, we found out that we were expecting. Eight months later, our oldest son was born. A few years after that, we were blessed with another.”

Felicia has always had a passion for the pro-life message. During her senior year of high school, when partial-birth abortions were made illegal, she participated in debates on the topic of abortion. As she grew into adulthood, she took her passion for life to social media, sharing pro-life posts on Facebook.

But she never imagined that the issues surrounding the sanctity of human life would touch her in such a personal way.

When Felicia became pregnant a third time, in the spring of 2017, it was with twins. However, she had trouble very early. “We had multiple pregnancy complications, starting at six weeks,” she told Live Action News. One of the twins died. “We had not seen a doctor at that point yet; they don’t usually want to see you until you are eight or nine weeks. So I went into the hospital, bleeding, in fear of miscarriage. They did an ultrasound and told us that we had lost one of two, but that the second baby looked healthy and strong. We had other scares when bleeding started again and again, but were told it was just due to the first loss and a hematoma beneath the placenta.” 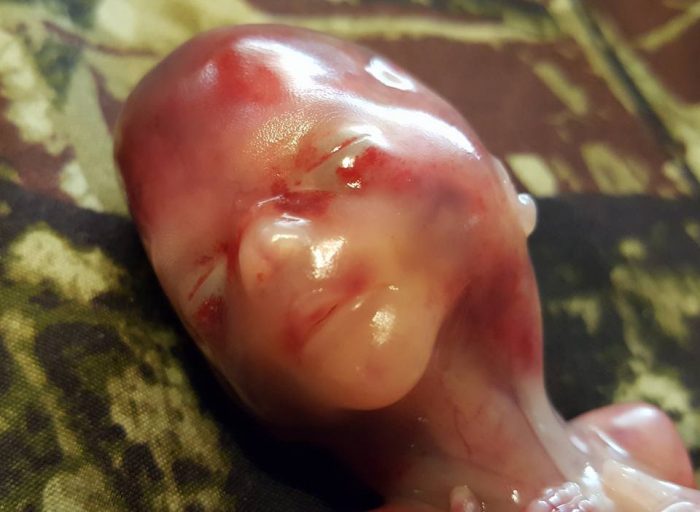 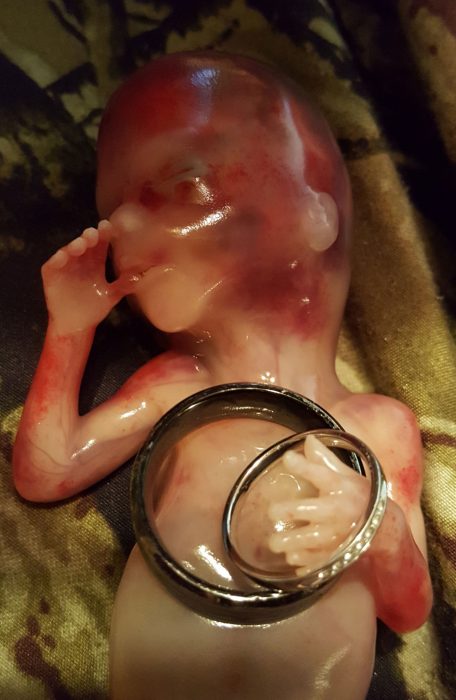 Sadly, the reassurance didn’t last long. “Monday morning, I had more bleeding and then pain,” said Felicia. “It happened very suddenly. I told my husband he needed to come home from work — only a 20 minute drive — but before he could get here, my water broke and within 10 minutes I had delivered my tiny son into my own hands. … Japeth Peace Cash was born the morning of July 24th at 8:30, at home.” Her baby was born at 14 weeks, 6 days.

Felicia chose to share photos of her son Japeth (in a post that was removed by Facebook without explanation), because she wanted “to show life at this stage of development and to hopefully save the life of another.” In a second Facebook post, she writes:

Our beautiful Japeth Peace, miscarried July 24th at 14 weeks 6 days. He is perfectly and wonderfully formed, right down to his amazing tiny toes and fingers. Even his fingernails are formed and visible. Tiny veins that carried his own blood to his precious body can be seen through his delicate skin, even his wonderfully formed muscles are visible. At less than half gestation he is very obviously human, not a cluster of cells, not a lump of tissue, not a blob of unformed flesh. He is a beautiful child, formed by God, and now gone to be with Him.

I am posting this in hopes of offering information to those who may not know how completely a child of only 14 weeks gestation is formed. And therefore not something to be taken lightly.

Felicia told Live Action News, “I know that many women feel that they have no other choice, and later they regret their decision to have an abortion.” Some of those women have written to her since her post about Japeth, expressing their remorse. For them, she says, she believes there is help and healing. “God forgives all. There are many who would love to talk to you and help you through your grief. I do not shame or condemn anyone; I only offer my condolences and hope for the future.” 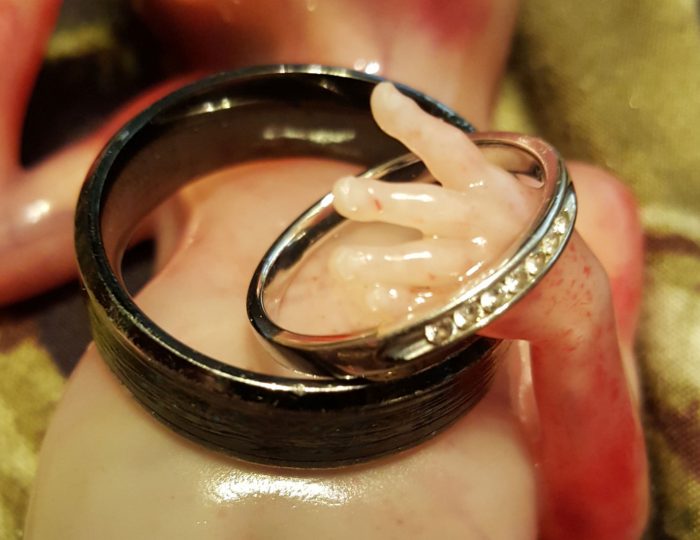 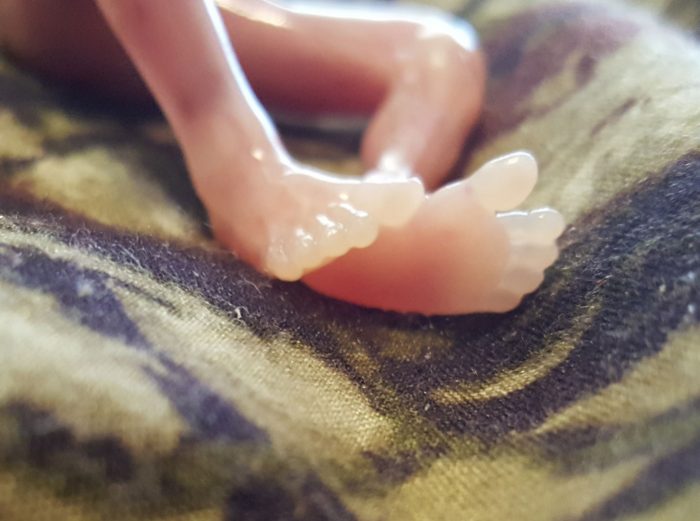 Women who have suffered miscarriages also commented on Felicia’s original Facebook post. “So many women have bravely posted their own heartbreaking pictures into the comments that I feel the need to try to keep up as best I can,” she said. “There are also thousands who have commented about their own losses, and they all deserve to be validated.” For those women, Felicia feels great sorrow. “I understand the pain and heartbreak,” she says. “Know that God is a comforter to those in need. And there are millions of others who have gone through this and understand your pain.”

Felicia shared her words and photos of Japeth to honor his memory and to show his humanity. Even though she expressed how heartbroken she is, she also insisted, “I knew that I couldn’t let his life count for nothing.”

Felicia’s hope is that women seeing her beautiful photos of Japeth will realize that he was not a ‘clump of cells’ or a ‘blob of tissue,’ but a very real human being — even earlier than 14 weeks. He was a very real human being from the moment of his conception. “A baby’s hearing begins to develop around six weeks. Their nerve endings the “alarm buttons” begin to develop around 7 weeks,” Felicia noted in her Facebook post. “All of this information is readily available on the internet and in medical journals and pregnancy guides, however, for some reason people seem to believe that all of this happens much later in gestation.” 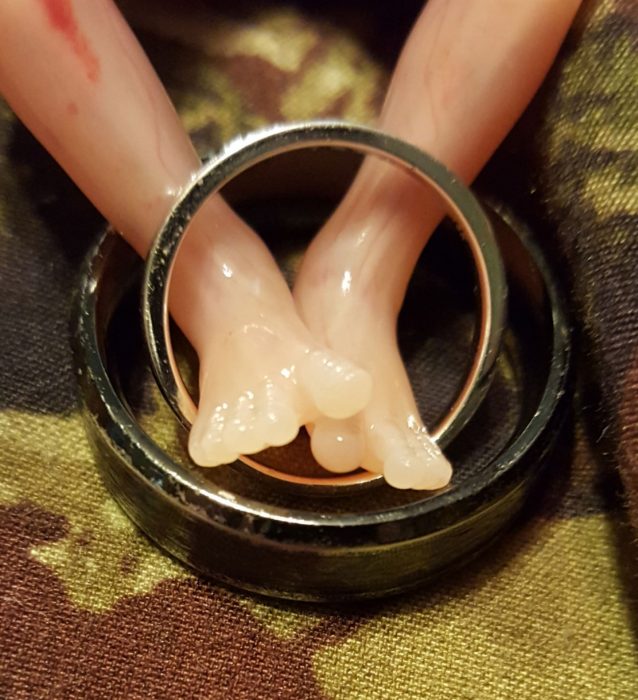 Felicia’s greatest desire is that women considering abortion will reconsider or speak to someone who can help. “There are other options. There are people willing to help you,” Felicia told Live Action News, adding, “As an adoptive mother for the past five years, I do understand the trauma and difficulties that adoption brings. But I’ve asked my own children their thoughts on it, and they each have said that they are thankful that their birth mother chose life for them, even if it was difficult and imperfect.”

“As miserable as this event has been, and as heart rending and tearful,” Felicia says, “I still thank God that I have been able to share Japeth’s precious life.”

Editor’s Note: If you are considering abortion or are struggling with abortion grief, or are experiencing an unplanned pregnancy and need help, visit this link for more information.