On Tuesday, in a bipartisan vote, the Pennsylvania legislature passed a ban on D&E abortion, also known as dismemberment abortion. In a D&E abortion, a preborn child is literally ripped by a metal instrument, limb from limb. Former abortionist, Dr. Anthony Levatino, describes D&E abortion in the animated video below:

Men and women who commit abortion procedures of all kinds are on record describing the violence and brutality of each of them. One of these abortionists, Leroy Carhart, gave his testimony on D&E (dismemberment) abortion to the U.S. Supreme Court. D&E abortion is the most common second trimester abortion procedure used in the United States. Justice Anthony Kennedy directly quoted Carhart and summarized some parts of his description:

One Pennsylvania legislator who opposed the D&E abortion ban, Rep. Ed Gainey, (D-Allegheny) said, “We have to be careful in this body that we don’t put an ideology on everybody and say that everybody has to live like this.” The majority of his colleagues — including many women — who voted for the ban disagreed. According to them, any civilized society should oppose this brutal killing of children. Rep. Kristin Phillips-Hill (R-York) said, “Dismemberment abortion is completely inhumane, it’s barbaric.” A pointed debate on the bill ensued, but in the end, the Pennsylvania House voted 121-70 to pass the ban, and the Senate agreed, 32-18.

In the same bill, Pennsylvania legislators also voted to move the abortion limit in the state from 24 weeks to 20 weeks, saving the lives of babies earlier in pregnancy — many of whom are viable and could live outside the womb. 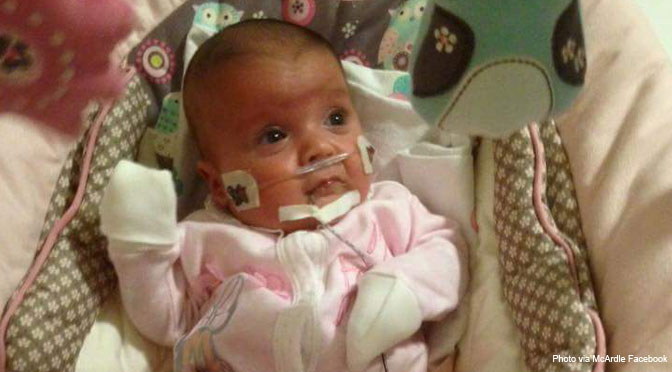 Baby Meabh Mcardle, born at 23 weeks. She could have been subjected to a D&E abortion. (Photo via Facebook)

Pennsylvania Governor Tom Wolf, a vocal abortion advocate, has announced he will veto the bill, saying, “These women deserve our support, not to be maligned by politicians in Harrisburg for making medical decisions about their bodies for their families with their doctors.” Gov. Wolf claims he will veto the bill because of women whose lives are at risk during pregnancy. However, this is a provably deceptive claim, as the bill allows an exception for abortion for the life of the mother or to prevent “the substantial and irreversible impairment of a major bodily function of the woman.

ACTIVISM: Send the animated video on D&E abortion to Gov. Wolf, so he can see that dismemberment abortions are not committed on a woman’s body, but on a baby’s body. It is the baby whose legs are torn off and who bleeds to death. Many of these babies are viable when D&E abortions are committed.

Tell Gov. Wolf that this bill already has an exception for the life and serious health of the mother, so he needs to stop lying to the public about his reasons for vetoing the bill.

Urge him to reverse his position and sign the bill. You can contact Gov. Wolf’s office here.