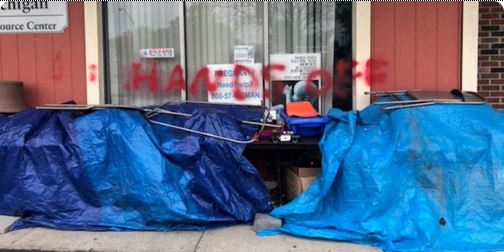 The Right to Life of Michigan Wayne County Educational Resource Center was vandalized sometime during the night last Thursday into early Friday morning. The pro-life group said it has been receiving more attention lately because of its hand in the state’s dismemberment abortion ban bills.

“We’ve been all over the news with our dismemberment ban and planned petition drive,” the organization wrote on Twitter following the incident. “We have a policy of non-violence, and that’s how the abortion debate should be handled on both sides.”

During the night, our Wayne County Educational Resource Center was vandalized. We’ve been all over the news with our dismemberment ban and planned petition drive. We have a policy of non-violence, and that’s how the abortion debate should be handled on both sides. #prolife pic.twitter.com/s9vK3evMBY

There are still no suspects in the vandalism, which was first noticed at about 7 a.m. Friday, but it included the words “hands off” spray painted on the front of the building. There was additional spray paint found on the back of the building, however, items that were out in front for the planned tag sale this weekend were not damaged.

“We’re very disappointed by this irresponsible act at our Wayne County Educational Resource Center,” said Chris Gast, a spokesman for Right to Life of Michigan.

“Thankfully nothing was damaged and volunteers have already cleaned up most of the mess. The yard sale there will proceed as planned today. We encourage whoever did this to come forward and apologize. The abortion debate should be handled peacefully, without violence or vandalism.”

Two bills banning Dilation and Evacuation abortion, also known as dismemberment abortion, were passed last week – one by the House and one by the Senate. It hasn’t been decided which version will be sent to Gov. Gretchen Whitmer, but she has said she will veto the bill.

In addition, according to the Detroit Free Press, Michigan Values Life, a ballot question committee,  filed paperwork on Wednesday to begin a petition drive this summer in hopes of ensuring the dismemberment ban becomes law even after the governor vetoes it.