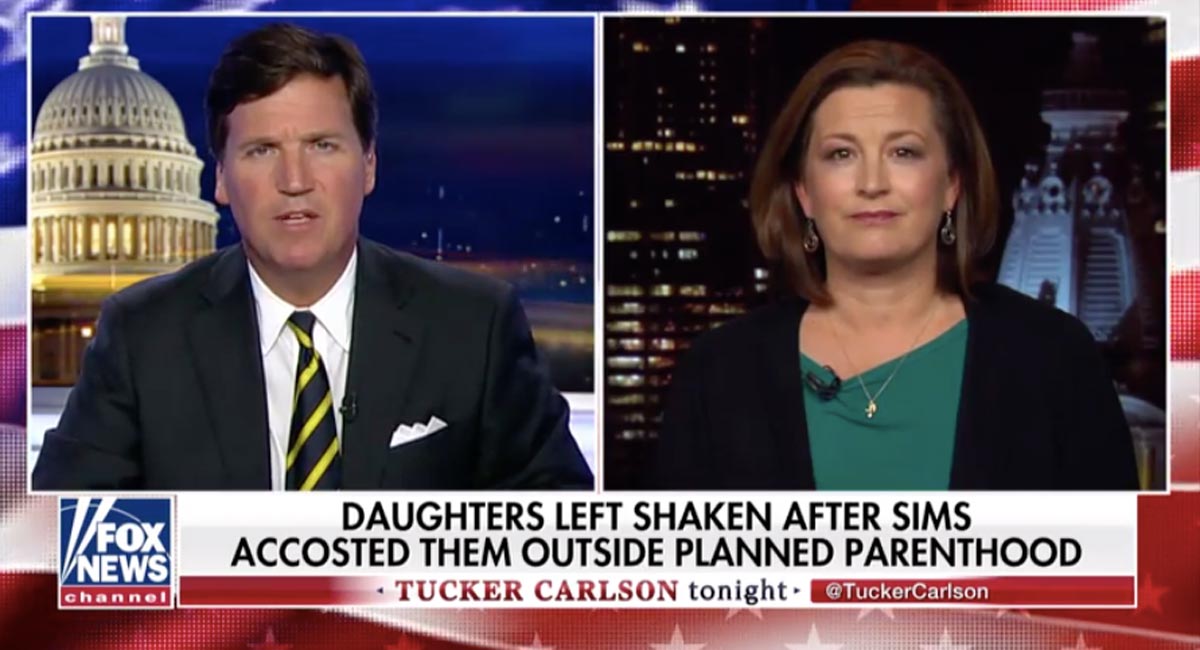 Ashley Garecht, a woman seen speaking in Pennsylvania state Rep. Brian Sims’ video outside a Philadelphia Planned Parenthood, spoke to Tucker Carlson on FOX, giving her account of what happened, and recalling how Sims ignored her requests to speak to her instead of aggressively yelling at her 15- and 13-year-old daughters and their 15-year-old friend.

“What is not seen in that video was our first interaction with Mr. Sims,” Garecht said. “He approached us about twenty minutes before that. He came in hot… really was yelling very directly at the girls, very specifically at the girls. So I moved myself in between him and the girls, asked him, ‘please talk to me’… but he continued to yell at the girls.” Ten minutes later he came back videotaping them, she recalled.

In a different video, Sims can be seen berating an older woman praying the rosary at the facility, calling her repeatedly an “old white lady” and telling her over and over, “Shame on you.”

See the video below of Sims’ interaction with Garecht and the teens. Keep in mind that Sims claims to respect women:

The group was at Planned Parenthood during Holy Week, praying for the women and preborn children entering there. When Garecht told the girls she was proud of the girls for being there that day, she said the girls told her, “Mom, that was nothing compared to what people were screaming at us at the March for Life in January….”

Garecht said, “So I guess I was grateful that they had had some experience before…. We prayed for [Sims] then, I said we’ll continue to pray for him…. He came back again videotaping us…. My adrenaline was up as a mom. My adrenaline was running.”

Her immediate reaction, she said, was to protect the teens who were with her. “I was concerned for my girls…. I was genuinely trying to enter into just a dialogue with him, to try to bring the situation- calm it down a little bit,” she said, adding that the group told him they were merely there to pray.

READ: Pennsylvania politician who bullied pro-life woman has been honored and funded by pro-abortion groups

“I was concerned that he said multiple times that he wanted the identities of my daughters…. “We were at that point already done, we had finished our prayers, we were leaving, so when I realized he was not going to enter into any productive dialogue, I thought, we’ll just continue our exit…. I didn’t ever think more would really come of it.”

Carlson pointed out that Sims kept calling them “white” while one of the girls was not Caucasian. “She said several times to him…. ‘I’m not white, sir’…. What he was saying literally just didn’t make sense.”

“… You’re arguing for fewer abortions among African American women,” observed Carlson. “He’s arguing for more, but you’re the racist?” Indeed, Black women have abortions at a much higher rate than other races. Those witnessing for life at abortion facilities are pleading for those lives to be spared, not to be exterminated.

When asked if any Democrats or any pro-abortion group had contacted her to apologize, she replied, “I haven’t been contacted by anyone in the Democratic Party about this situation at all.”