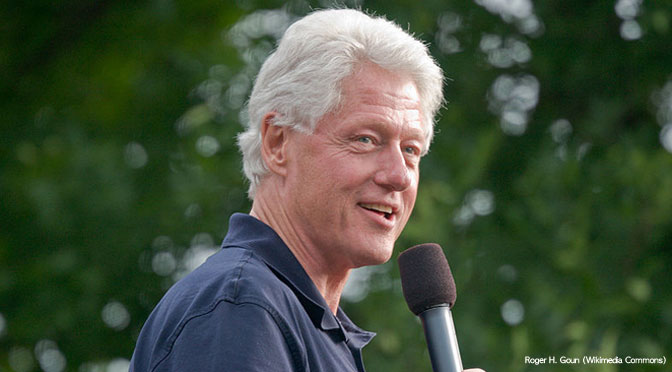 From the Washington Free Beacon come a pair of abortion-related statements by former President Bill Clinton that are each eye-opening in very different ways. They come from audio recordings made by respected biographer and longtime Clinton friend Taylor Branch, after interviews he had with the president for his book The Clinton Tapes.

“[Clinton] said something cryptic about Santorum,” Branch said in the tape. “He said, ‘Their child died a few hours after delivery.’ Then he said, ‘One day he’ll be found out.’”

Branch initially thought that Clinton was saying that Santorum “would be found out as an airhead,” but later came to the conclusion that Clinton’s comment was much darker.

“In retrospect, after he said that cryptic remark about his wife, I wondered if what he was saying was that it would be found out that what they said was actually an infant death was instead really an abortion,” said Branch. “That they had an abortion and then said that the baby died shortly after birth as a way of covering it.”

Branch said Clinton was leaving a note to himself with the “cryptic remark” and made sure that the meaning was unclear.

As the Free Beacon’s Brent Scher recounts, “the Santorums aborted their son Gabriel” is an old smear that is occasionally dredged up by particularly extreme and odious partisans for abortion, never mind that even the rabidly pro-abortion Salon debunked it in 2012, interviewing an OB/GYN who concluded that “the word ‘abortion’ probably shouldn’t even be used in this context.”

They give the conspiracy-mongers’ intentions the benefit of the doubt, saying the specifics of Karen Santorum’s condition and the treatment of them would be easy for laymen to get confused, but Branch says Clinton “spewed technical details” like “a medical specialist,” making it harder to give him the same pass.

So in the absence of specific, affirmative evidence that the truth was something other than what Santorum said, what possible reason would there be for Clinton to muse about him being “found out” in relation to how “their child died”? Branch recounts Clinton “roll[ing] his eyes” at Santorum and “scathing of Santorum as a terrible candidate and an idiot.” Is that it? Conjuring up malicious conspiracy theories about someone based solely on personal animus toward him is a deeply ugly characteristic in a President of the United States.

Second, Clinton had some harsh words for his fellow pro-aborts’ extremism:

Clinton said that pro-choice activists “framed the question selfishly by putting it in terms of a woman’s right to do whatever she wanted,” making it seem like they were fighting for a “selfish woman’s right to crush her baby’s skull.”

Clinton saw some of the pro-choice stances as extreme, such as the belief that third-trimester abortion should be legal.

“I believe that if you can’t make up your mind in the first six months, you don’t have the right to have an abortion,” Clinton said according to Branch.

“He said the pro-choice people have essentially allowed their own insensitivities to push them into a losing political situation and make a statesman out of Rick Santorum, which he rolled his eyes at,” said Branch.

The answer is simple: Bill wasn’t speaking from the goodness of his heart, but talking about the political inexpediency of the losing issue the abortion lobby saddled him with. Still, it’s a remarkable admission that the man reporter Nina Burleigh once said she’d give sexual favors to “just to thank him for keeping abortion legal” knew all along that partial-birth abortion “crushed babies’ skulls”…yet was perfectly willing to protect it anyway.

The Free Beacon reports that President Clinton declined to comment on the revelations, which is in his and his wife’s best interest—surely they don’t want the American people thinking about whether vicious lies about political opponents and knowing support for crushing the skulls of innocent children are values they want back in the White House.