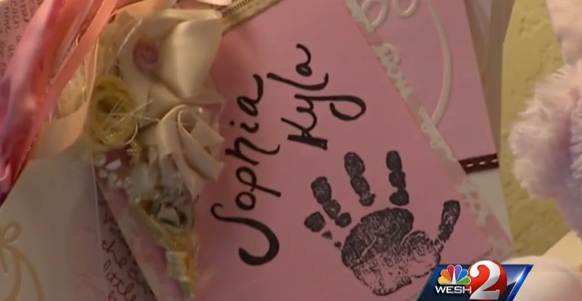 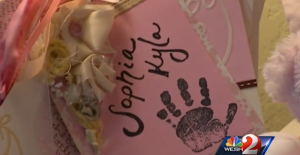 Bristol Palin spotlighted the amazing and heartbreaking story of Sophia Kyla Dennis, daughter of Lindsey and Kevin. At twenty weeks pregnant, Lindsey and Kevin were given the devastating news that their daughter had a brain disorder that was 100% fatal. Rather than having an abortion, they gave birth to their beautiful baby and got to enjoy ten hours with her.

“The 10 best hours of my life,” is how Lindsey Dennis describes her short time with Sophia Kyla, born last fall. Lindsey and husband Kevin found out at the 20th week of her pregnancy that Sophia had a brain disorder that is 100 percent fatal. Their heartbreak has been eased by an organization run by volunteers called, Now I Lay Me Down to Sleep. “As a more intense grieving began for us, having photos of Sophie when she was alive and well just meant the world to us,” Kevin explains.

Now I Lay Me Down to Sleep is an organization comprised of amateur photographers who, at no charge, give parents like Lindsey and Dennis free portraits of their babies for the brief time that they have them, so that they can remember their child and the memories of them.

But to one pro-abortion extremist, Sophia Kyla’s life and story isn’t one to be celebrated. Instead, they’re slamming the parents, calling them selfish, immoral, and macabre.

So to be clear this woman went through nine months of pregnancy just to have ten hours of watching her newborn suffer as its little body slowly died.

And they then had the experience documented through photographs so that they could relive it over and over again.

I don’t think I have ever heard of anything so selfish and macabre in my life.

At twenty weeks they could have chosen to protect their child from future suffering by aborting the pregnancy. But instead they are so aggressively “pro-life” that in their minds it was better to give birth to a child who will never have a chance at life, then to allow the pregnancy to terminate with no pain for the fetus.

As a parent learning that your child had no hope of survival is without a doubt the most painful thing one can imagine, but your decision about what to do next should focus on protecting that child from unnecessary hardship and NOT on your own ideological sensibilities.

Yes, how truly selfish to give their child 10 hours of life instead of snuffing it out before she had a chance to ever take a breath. How immoral to want their daughter to know love and kindness before she died. How macabre to want to have pictures to remember her by.

It is beyond disturbing to see such fanaticism for abortion, and such a massive lack of appreciation for the miracle of life. Lindsey and Kevin Dennis got to hold their daughter, tell her that she was loved, kiss and cuddle her, for ten hours. That’s ten hours more than they would have received had she been aborted. And Sophia Kyla got to die peacefully in her parents’ arms, her last moments being filled with love. The alternative would have been letting her be ripped apart piece by piece. Which option sounds more loving, and which sounds more selfish? The easier thing to do would have been to have an abortion.

And apparently, not only were the parents supposed to never let their daughter take a breath or know her parents’ love, but they were supposed to pretend she never existed as well. Because how dare they have photographers take pictures of them with their daughter before she died? How dare they remember her life, no matter how short it may have been?

It is nothing short of gruesome and coldhearted to have such callous indifference to life, love, and loss. The value of a life has nothing to do with the number of hours one gets to live or how many other lives are touched. And what an incredibly sad way it must be to live, to have such little regard for love and the difference it can make. Sophia was loved, and as Lindsey said, the ten hours she lived were the best hours of her life. She didn’t go through nine months of pregnancy just so her daughter could die. She went through nine months of pregnancy so that she could live.

To find out more information about Now I Lay Me Down to Sleep, please visit their website.