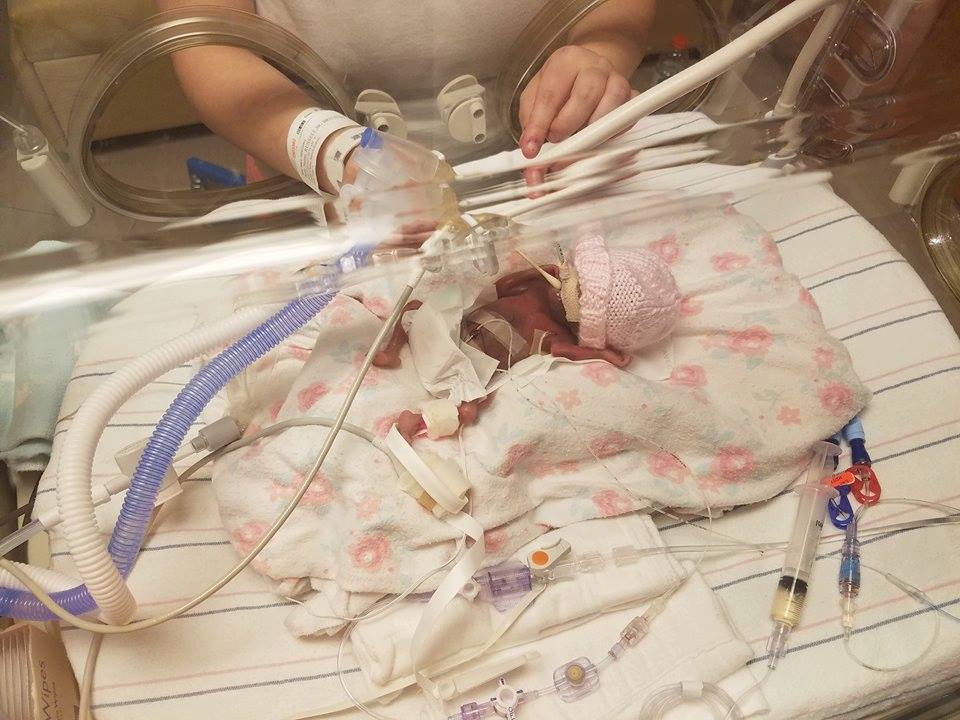 Brooklen Nicole was born on May 23, 2017, after an emergency C-section was performed in hopes of saving her. Though she lived only a few days, Brooklen touched the hearts of thousands of people after her parents shared a video of her to K-Love’s Facebook page.

Complications with her umbilical cord and placenta were discovered at 18 weeks and left the little girl unable to properly grow in the womb past that point. Her parents had a decision to make and chose to travel to a hospital with doctors who could give their daughter a chance. At 24 weeks and three days gestation, weighing just nine ounces, Brooklen Nicole was born.

“The options given to mom and dad were: sit and wait and hope for a heartbeat week after week, or drive quite a ways to a specialized hospital who could give the baby a chance,” explained Brooklen’s aunt Kella Lowe. “They waited six days to deliver, the doctors said five percent chance (of Brooklen’s survival) upon prep for the c-section so mom and dad were prepared to say goodbye right away.”

Brooklen surpassed the doctors’ initial expectations for her, and the outlook went from minute-by-minute and hour-by-hour to day-by-day. After she had been stable for three days, doctors said her prognosis had improved.

“Families have to make their own decisions on their children, we would do anything and everything for ours! It’s a long battle but not a hopeless battle,” said Lowe.

Though Brooklen’s battle was hard fought, according to the family’s Facebook page, the tiny and much loved baby girl died on May 27, as “there were some things her little body just could not heal from.”

In her viral video, Brooklen can be seen kicking her tiny legs and moving her arms just as she would be doing in the womb. As early as 18 weeks gestation, a preborn baby’s movements can be large enough for the mother to feel. At 20 weeks, the preborn child is practicing swallowing. Babies born at Brooklen’s gestational age – and even earlier – have survived, but since Brooklen had stopped growing in the womb, her fight was harder than most.

While many doctors and parents may have given up on a such a premature child, Brooklen’s family and care team worked hard to save her. And Brooklen fought as hard as she could. As she fought, thousands prayed for her, and the video of her kicking received 2.8 million views.

Brooklen was able to put a face on the humanity of babies who are usually still in their mothers’ wombs. There is no doubt that this small girl changed the lives of many of those people and changed hearts regarding abortion and the reality of what it does to babies.