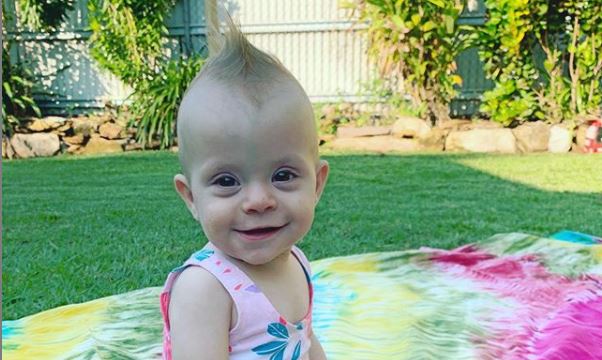 During the 20-week ultrasound for their preborn baby girl, Lenai and Matt Schier of Australia were told there was a massive tumor growing on her tailbone. According to the Mirror, two days later, doctors diagnosed little Zalya with sacrococcygeal teratoma (SCT), a rare birth defect, and offered her parents an abortion. They refused.

“The doctors told us not to Google anything when they found the lump,” Lenai explained. “However, my husband and I did. For those two days, all I could think was did this happen because I didn’t take my pregnancy vitamins every single day or not eat healthy enough? I was so scared our baby wouldn’t be able to walk or she would be in a lot of pain.”

The couple was overwhelmed by the diagnosis and doctors couldn’t do much to reassure them because they didn’t know enough about SCT. The medical team was concerned about the size of the tumor but were able to tell the Schiers that the tumor wasn’t affecting any of her organs. As the pregnancy progressed, Zalya developed anemia as her heart struggled to handle the blood flow to the tumor. Lenai underwent ultrasounds three times a week to keep a close eye on their baby girl.

#sorrynotsorry for all the baby spam. But this tiny human smiling while this amazing man holds her just melts my heart ❤️ I can't even begin to describe how amazing Matt is. Not only the best father but the best partner to have by my side through the good and bad. He keeps me strong and always puts our family first. I can only hope that Wilder will grow up to be an amazing man following the footsteps of his father. #bestdad #daddydaughter #28weekpreemie #somuchlove #proudfather #ilovethisman #photooftheday #instababy #sctsurvivor #sacrococcygealteratomasurvivor

“When we got to hold her for the first time, I just remember crying — both of us were. I was just in shock at how small she was and that the SCT was larger than her. We saw the SCT on the scans and they would always tell you how much bigger it grew. Seeing it in person just made it so real. It was so good to see her but I was also absolutely terrified because we knew that she’d be going into surgery,” said Lenai. “We were just hoping for the best outcome in the end — that we’d be back to see our baby alive.”

Zalya underwent surgery to remove the tumor and her coccyx bone in hopes of preventing the tumor from regrowing. She had to be revived several times and also had five blood transfusions. It was five months before Zalya was finally able to go home with her parents and her older brother.

Now, just over a year old, Zalya is thriving. She has yet to walk or crawl but she wiggles around the house. She is followed by doctors to watch and make sure the tumor — though benign — doesn’t regrow, which is a risk until she turns five.

Parents who are advised to abort their babies may be given outdated or inaccurate information about their child’s condition. Speaking with specialists and other parents can help them realize that their child’s life will be worth living.

During her pregnancy, Lenai reached out to other mothers who had gone through the same diagnosis and she was able to find support and comfort from them. Now she does the same for others. By being proactive and learning what they could about the diagnosis and by reaching out to other families, the Schiers did what all parents facing a diagnosis for their child should do.