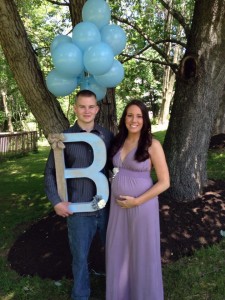 I recently came across this touching Facebook group, Prayers for Shane. It was created by the mom and dad of baby Shane, a little boy who is due in October.

Baby Shane has been diagnosed with anencephaly, a malformation of the baby’s skull and brain. Many parents, upon receiving this heart-wrenching diagnosis, lose hope for their child’s future.  But Shane’s parents, Dan and Jenna Haley, are no ordinary parents. With a deeply-rooted faith in God, which has remained unshaken by the unclear path set before them and their son, Dan and Jenna have relinquished their anxiety and fear and chosen to embrace the time they have with Shane — however long or short that may be.

On their Facebook page, they record memories they are making with little Shane, using the hash tag #shanesbucketlist. They have visited family, gone to the zoo, and attended sporting events. In fact, Dan is a semi-professional baseball player, and little Shane is his biggest fan. 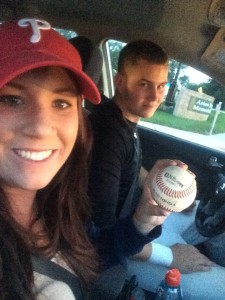 I spoke with Dan about his and Jenna’s journey awaiting the birth of baby Shane.  I asked Dan how they found out that the baby was not developing as expected. He shared that he, Jenna, and little Shane had experienced a car accident, and although no one was injured, they decided to have the baby checked out to make sure that he had not been injured in the accident:

The doctors informed us that there had been some fetal bleeding but that it was nothing serious and Shane should be absolutely fine but they decided to send us to a specialist to do a more detailed ultrasound. Jenna decided that she would be fine just going with her Mom while I was at work so they went and I waited to hear the good news that everything was fine with Shane. I remember getting a text from Jenna and all it said was “call me.” I had a feeling that something wasn’t right. I called her and I could tell she had been crying by the tone of her voice when she answered. Through a cracking voice she just said ‘I’ll be home in a few minutes and I have something to tell you.’ She got home and was balling her eyes out and I remember her showing me some new ultrasound pictures and she said that’s our baby. I could see that something wasn’t normal about his head and she showed me the note the doctor gave her. All it said was ‘anencephaly”. Not knowing what it was or what it meant I asked her to explain. But all she could remember was the doctor telling her that babies with anencephaly do not survive.

Here, Dan and Jenna faced a crossroads. How they responded to the unexpected news speaks volumes about their character: 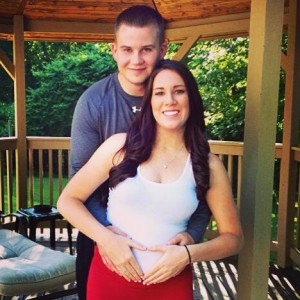 We were in shock to say the least and didn’t want to believe that all of this was happening. It was in the car that day that we both agreed that God was blessing us with such a special baby for a reason greater than we could understand and that no matter how hard it was to feel the way we did, that we had to keep the faith and believe in His plan for our lives. We wanted people to never question how proud we were to be Shane’s parents and that we were thankful and felt blessed that God chose us to bring him into the world. Shane is our son and we are so proud of him and he’s had such a positive impact on the lives of so many people that have heard his story.

I asked what inspired the couple to share Shane’s story in such a public way on Facebook. For Dan and Jenna, it was only natural to celebrate and publicize a life that they firmly know is growing and thriving at this moment. They don’t know how long Shane will be with them, but they do know that he deserves to have his time on earth celebrated. Dan shares that it has also been helpful to their little family to know how many people are praying for them:

We understood from the beginning that our time with Shane could be very limited. We pray every night for time with our son but also pray that we accept God’s will and plan, whatever it may be for our son. Knowing that most babies with anencephaly live no more than twenty four hours we wanted to share Shane’s journey with the world so that people would know that although he hasn’t been born yet and has a terminal diagnosis he is very much alive and experiencing life in the womb.
We wanted people to know that we are so proud to be his parents and that we wouldn’t change anything. We wanted to allow him to positively impact others through his story and the response has been overwhelming. Shane is making a difference in so many people’s lives and we our so grateful for all the love and support that so many people have shown for Shane, Jenna, and I.