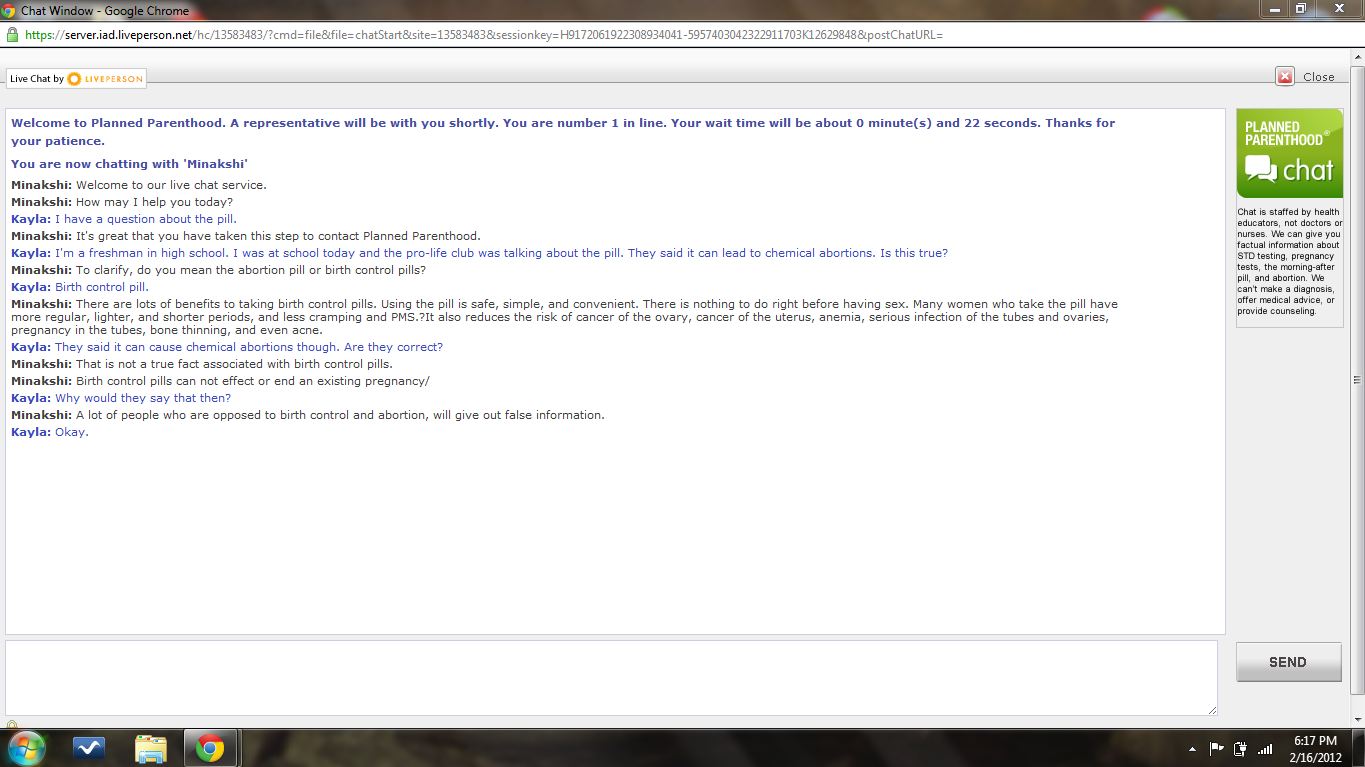 Planned Parenthood now offers an online chatting service to anyone that visits their webpage, where they claim to give out “factual information about STD testing, pregnancy tests, the morning-after pill, and abortion.”

What the Planned Parenthood representative doesn’t mention is that there are a lot of risks associated with the pill, especially an increased likelihood of getting breast cancer.  If Planned Parenthood boasts of giving people “factual” information, why aren’t they giving all of the facts?

Next, “Kayla” asked if the birth control pill can cause chemical abortions.  The Planned Parenthood representative states this is “not a true fact” and that those who claim so “give out false information.”

However, it has long been established in the medical community that hormonal birth control methods (the most common being the pill), can function as abortifacients, because they have the potential to prevent a newly conceived human being from implanting in his or her mother’s womb, thus causing an early abortion.

In the past, pregnancy was established when sperm and egg joined (when fertilization occurred and the new human being came into existence).  The definition of pregnancy was eventually changed to the one Planned Parenthood now has on its website: “Pregnancy begins when a fertilized egg implants in the uterus.” This change occurred in 1965, just a few years after the FDA approved the pill, and the same year as Griswold vs. Connecticut, which made the pill available to all married women in America.

This was not a coincidence by any means.  Planned Parenthood knew that many people would object to the pill if they realized it could cause an early abortion, so they turned to semantics instead of facts to push for hormonal contraception.  At a Populations Council conference in 1964, a Planned Parenthood researcher stated that the fact the pill can act as an abortifacient shouldn’t “disturb those people for whom this is a question of major importance.”

Planned Parenthood is continuing to deceive us and has been for decades.  Parents should be weary of the potential detriments of this technology Planned Parenthood is using to get to the youth of this country.  These deceptions were discovered in a short online chat session with Planned Parenthood—imagine what they’d do and say if they were allowed to infiltrate schools’ sexual education programs.