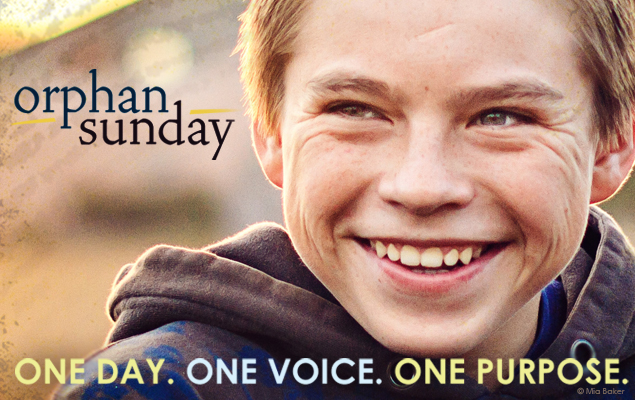 In the pro-life battle, sometimes the fight to stop abortion overshadows the solution to abortion: Adoption. If we expect a woman to carry a baby and we expect the baby to live, our cause can never end when the woman leaves an abortion clinic.

This Sunday churches across the world will take part in the growing event known as “Orphan Sunday.” Every year, the first Sunday of November, churches shed light on the global orphan crisis and encourage the answer within its own walls. The Christian Alliance for Orphans, which sponsors this event, is promoting “One day. One voice. One Purpose” to shed light on the global orphan crisis which is in the power of pro-lifers to change.

“On Orphan Sunday, Christians stand for the orphan. We are a people called to defend the fatherless…to care for the child that has no family…to visit orphans in their distress.

“From many sources, one voice. On November 3rd, 2013, thousands of events will echo across America and around the globe, all sharing a single goal: that God’s great love for the orphan will find echo in our lives as well.

“Orphan Sunday is your opportunity to rouse church, community and friends to God’s call to care for the orphan.”

That sounds touching and like a good service where we write checks for special offerings—and that’s a good thing, but orphans needs more than our one week summer mission’s trip to Africa or our special offering to the orphan fund. That’s a start, but only a start. Orphan Sunday exists to highlight a literal plight, not a day. The day should function as an enlistment for the future, not a special service to forget when we go to lunch.

Orphans are everywhere. Few of them resemble the tales of Sara Crewe in A Little Princess or Little Orphan Annie. Hollywood has not done a service to the real orphans who are rarely thriving with joy and singing song in orphanages, but are often struggling to find hope in a normal day, or are being shuffled from foster home to foster home. Healthy baby orphans aren’t really the norm in our nation where childless couples want a chance to adopt and often focus on these newborns, an understandable focus as the baggage that accompanies them is less cumbersome. But in actuality, the crisis is with the orphans we struggle to want.

The spotlight on orphans as a result of Davion Only has reminded us of more than 100,000 kids in America’s foster care system who are needing adoption (over 400,000 are actually in foster care but not all are there for adoption). The median age of these kids is 8.5 years. They need a family. And like Davion, they probably aren’t too picky about who loves them.

Many orphans are not within the mold of what we perceive as orphans, ether. Some are what experts refer to as “functional orphans,” which means one or both biological parents are living but unable to care for them, due to multiple factors such a being in prison, being mentally ill, or sometimes simply being unwilling for their own reasons. The hearts of children like this are not much different from those who have had both parents die, and sometimes are more damaged from the rejection and confusion as they flounder around the system, often losing hope as years go on.

Every single orphan, from the newborn to the teenager, from those with no biological parents to those separated permanently from their biological parents, every one of them needs a home and a family—and a support system of others who are not necessarily called to be their family.

It’s not too late to be involved in Orphan Sunday. The website has resources you can use to launch ideas or even use as rescue to begin learning how to start an orphan ministry. The Christian Alliance for Orphans site also shares some past ideas of what churches have done on this important day. Remember, though this Sunday is Orphan Sunday, orphans need not only this initial awareness but deep and passionate involvement every day. Orphan Sunday exists to highlight this cause, but it goes beyond Sunday.

If your church has some special event Sunday and can’t possibly see undertaking this ministry at this late hour, why can’t you do something? What about another Sunday? What about a new ministry? Options exist and Orphan Sunday isn’t an either/or choice. It’s a terrific launching pad and often captures hearts with awareness, but it’s a piece of a greater puzzle that we need to help put together for the many orphans who need someone to call their own.

Sometimes the fight for life and the plight of the orphan get separated, but to care about one is to care about the other. Orphan Sunday is a beginning, but may it never be an end until the end of orphans in our land is a reality.

You can find more information on Orphan Sunday and a list of regional coordinators here.