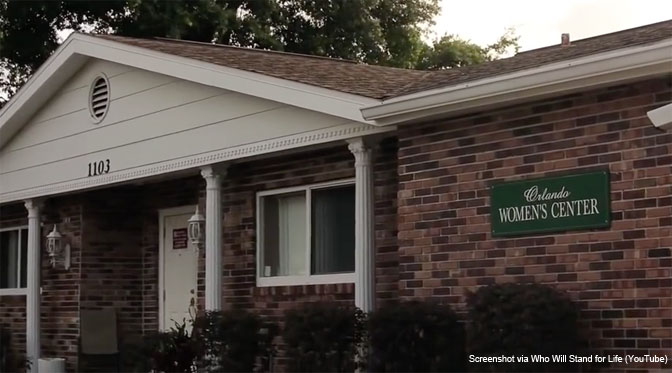 An abortion facility with ties to a notorious abortionist may be forced to close after racking up hundreds of thousands of dollars in fines. The Center of Orlando for Women (the new LLC name for the well-known Orlando Women’s Center) allegedly committed 193 abortions without complying with the state’s required 24-hour waiting period. Each violation comes with a fine of $1,000.

The Center of Orlando for Women was originally founded by James Pendergraft — a late-term abortionist with a long history of injuring women in botched abortions, medical malpractice lawsuits, and illegal abortions — and his name remains on the abortion facility’s website. He has been arrested on drug charges, at which time he was found in possession of surgical implements covered in blood and human tissue from illegal abortions he had committed in South Carolina. Some of Pendergraft’s abortion victims survived his abortion attempts, and were left to die. He was also caught laundering money after losing a $37 million medical malpractice lawsuit brought against him.

In 2018, his Florida licenses for each of his four abortion businesses was revoked, but there is a possibility that Pendergraft could still be involved with his former abortion business. After this, the business was renamed to the Center of Orlando for Women, and ownership was transferred to Denise Williams — his ex-wife and the mother of his children.

According to WFLA, the Agency for Health Care Administration (AHCA) was given the green-light to enforce the Florida waiting period requirement by a judge in March. Despite the ruling, the abortion facility still committed abortions without waiting 24 hours first, and now faces a $193,000 fine. It is appealing the decision, and blames the AHCA for the situation. The abortion facility claims to have asked for an effective date but never received an answer, and so seemingly assumed they were free to violate the law at will.

“The agency regulating abortion clinics could not tell the owner of a clinic the effective date of a major change in the law governing the process of providing an abortion,” the clinic’s response filed at the Division of Administrative Hearings said, according to WUSF Public Media. “More specifically, respondent had heard of the ruling that allowed the 24-hour waiting period to go into effect but could not locate any information about the effective date of the new requirement which mandated a significant change in how abortions are provided in Florida.”

Two other abortion facilities, both located in the Miami-Dade area, have also received fines, but neither has amassed the amount in fines close to the Orlando center. The controversial abortion facility is appealing in hopes of having the fines waived, and claims it faces bankruptcy if it has to pay.