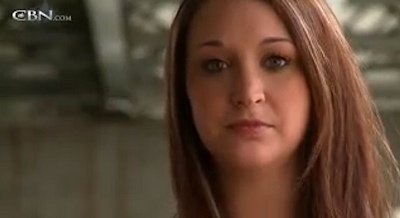 Claire Culwell was twenty years old when she decided she wanted to meet her birth mom. She contacted the adoption agency, and a month later, she received a call from her mother. When they met for the first time, she gave her mom a card that said, “Thank you for choosing life for me.” Her mother took her by the hand and led her into a back room where she then explained the story surrounding Claire’s birth.

Claire’s mom had grown up in a broken home and found herself pregnant at the young age of thirteen. When Claire’s grandmother found out, she brought her to the abortion clinic, where a surgical abortion was performed while Claire’s mom was five months pregnant.

Four week later, a friend encouraged her to go back to the doctor, as there appeared to be complications. She went back to the abortion clinic, where it was discovered that she was still pregnant. Claire’s twin had been aborted, but she had survived. With the amniotic sac broken, Claire was born just two weeks later. At 3 pounds, 2 ounces, little Claire struggled to live, spending the first two and a half months of her life in the hospital.

Claire is not angry at her birth mom; rather, she finds her to be one of her biggest heroes. The courage it took to tell Claire the story surrounding her birth has resulted in people’s lives being impacted.

Claire now travels, sharing her story to encourage people to choose life and to help those who have already had an abortion:

My life is a testimony that there are wonderful alternatives to abortion (such as adoption in my case) and an accident/unwanted child still deserves life…even a child with disabilities. I was born 2 1/2 months early, weighed 3 lbs 2 oz, had dislocated hips and club feet. I had to wear casts on my feet, a harness and eventually a body cast. The abortion still affects me today. All that to say, LIFE IS STILL WORTH IT. If my life can touch just one person who has had an abortion or considering an abortion or adoption, then I am fulfilling my purpose in the pro-life movement.