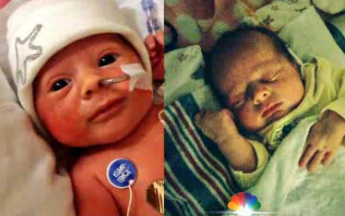 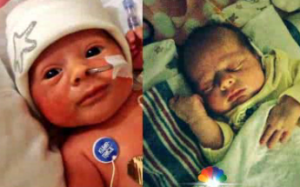 At the Sochi Olympics, hockey player T.J. Oshie was arguably the USA’s biggest star. Scoring the game-winning goal against host country Russia, Oshie made his country proud. When he was called a hero, Oshie became even more beloved with his humble reply:

The American heroes are wearing camo. That’s not me.

Though Oshie agrees that the Olympics were a thrilling moment in his life, he considers his new daughter even more thrilling. In an interview with Today, Oshie said:

Lyla Grace shows up. She trumps everything.

Little Lyla was born with a birth defect – one that babies born years ago sometimes wouldn’t survive. The birth defect is called gastroschisis, and is best described as “a condition in which an infant is born with the intestines on the outside of the body.”

Gastroschisis is a “fetal anomaly” that parents sometimes seek abortions for. But the condition has a 90% survival rate in “adequate settings,” and many people born with the condition go on to live a perfectly normal life. Medical News reports on the modern advances in repairing gastroschisis:

The general procedure for gastroschisis is to simply tuck the protruding organs back into the opening and apply a belly band pressure until the wound heals itself.

New advances have been pioneered in repairing the protruding bowel by placing a protective “silo” around the intestine outside the abdomen, then slowly pressuring the herniated intestine into the abdominal cavity.

Gastroschisis is a perfect example of why abortions should not be allowed for “fetal anomalies.” First, the baby is a human person whether or not she has an anomaly. Second, modern medicine provides a way for many anomalies to be repaired. And third, no baby deserves the cruel death that abortion is simply because she is not “normal.” Most abortions performed for fetal anomalies are done after 20 weeks, when a baby unquestionably feels pain.

T.J. Oshie at the Olympics.

Thankfully, T.J. Oshie and his fiancée, Lauren Cosgrove, love their daughter for who she is – defect or not. They’re just glad their daughter is here – alive and, by all signs, well on her way to a long and healthy life after her surgery.

“She’s adorable,” Oshie told TODAY. “You catch yourself just holding her for two hours and looking at her the whole time.”