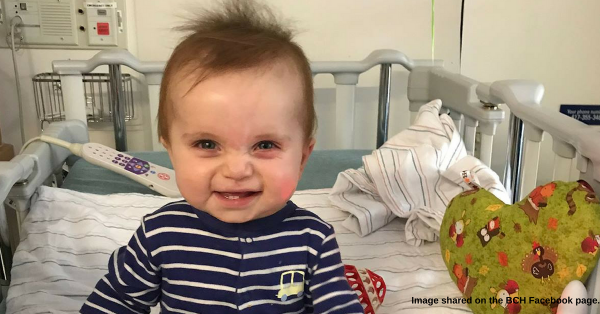 Most parents would readily cross oceans to save their child’s life, with no thought as to the cost or distance. But for some children in the UK, like Alfie Evans and Charlie Gard, that simply wasn’t an option they were given. Oliver Cameron is one of the fortunate ones, though, and thanks to the tireless efforts of his parents and doctors at Boston Children’s Hospital, Oliver is alive and thriving today.

When Oliver was born in the United Kingdom, he had a large, non-cancerous tumor in his heart, called a cardiac fibroma. It was so rare that doctors in the UK weren’t able to treat it. Only a handful had even seen it.

“They couldn’t treat the tumor in the U.K. because they didn’t have any doctors with the right expertise,” his mother, Lydia, said. “They said our only option was a heart transplant, but we thought there must be another route, so we started doing our own research.”

READ: Alfie Evans is just the latest victim in Europe’s culture of death

Their research led them to Boston Children’s Hospital, where another little girl, Francesca, had successfully had her large cardiac tumor removed. Her story was posted on the Boston Children’s Hospital Facebook page the day after Oliver was born, which Lydia took as a sign. So she reached out to Francesca’s doctors, Dr. Pedro del Nido and Dr. Tal Geva, and sent Oliver’s records to them. They responded that he would be a good candidate for the surgery — even though the NHS doctors were insistent that Oliver’s tumor could not be removed. But the difficulties of getting Oliver treatment weren’t over yet; the Cameron family now had to find a way to pay for it.

At first, the NHS refused to pay. “Oliver’s cardiologist spent hours of his own time trying to get Oliver to Boston — he kept applying and reapplying for the National Health Service to cover the surgery in the U.S., but with no luck,” Lydia said. “So, we started our own fundraising campaign, because we had no other way to get him there.” But after they successfully raised most of the money, they got good news: not only would the NHS pay for the surgery, they would also send two cardiologists and a cardiac surgeon to learn from the doctors at Boston Children’s.

In November of 2017, Oliver underwent the eight-hour surgery, which went better than expected. “Dr. del Nido warned us that they may not be able to remove the entire tumor because it was so large, but that he would remove as much as possible,” Lydia explained. “So when they told us he had removed all of it, we were so happy we just burst into tears.”

The tumor ended up being one of the largest the doctors had ever seen.

After the surgery, Oliver continued to stun doctors by making a rapid recovery, and was able to return home by Christmas. “This experience has shown us how much good there is in the world,” Lydia said. “So many people supported us along the way, from near and far. And without Dr. Geva and Dr. del Nido, we would have lost Oliver. Miracles do happen — and we are grateful to be celebrating ours.”

The Camerons were exceedingly fortunate that they were able to bring Oliver to the United States to receive treatment. It’s a blessing not given to everyone, denied most notably to toddlers Charlie Gard and Alfie Evans. The parents of both boys were told that treatment was futile and that they should just be allowed to die; when the parents raised money to seek treatment outside of the United Kingdom, hospitals and courts refused to allow it, and forced both boys to be removed from life support.

In Oliver’s case, had his parents not fought for him to go to the United States for treatment, he would have needed to wait for a heart transplant — and as infant heart transplants are exceedingly rare, there is a good possibility he would have died waiting. It stands to reason that parents should have the right to seek medical care outside of the United Kingdom for their children, even if the NHS thinks treatment will fail or is futile.

MP Steve Woolfe introduced a bill he called “Alfie’s Law,” which would restore parental rights to prevent injustices like those suffered by Charlie Gard and Alfie Evans from happening again. “The cases of Charlie Gard, Aysha King, and now Alfie Evans, show a dangerous trend of public bodies depriving parents and families of the right to make decisions they believe are in the best interests of their children,” Woolfe said during a press conference. “Parents’ rights should neither be ignored nor dismissed as irrelevant by hospitals and courts, who believe they know best and have the power, money and resources to overwhelm families who simply want to save their child.”