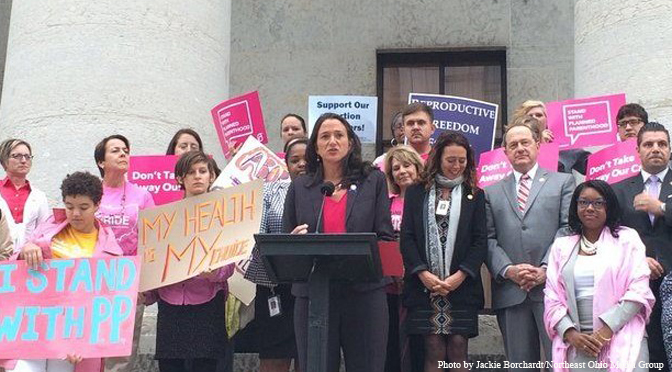 Ohio Democratic lawmakers will introduce a half-dozen bills meant to expand abortion in the state, they announced Wednesday.

The bills would repeal Ohio’s requirement that abortion clinics have emergency transfer agreements with non-public hospitals, 24-hour abortion waiting period, ban on taxpayer funding of abortion, and ban on insurance coverage for state employees’ abortions or abortions through Obamacare exchanges, “protect doctors and clinic patients from harassment by anti-abortion activists,” and require crisis pregnancy centers to “provide ‘medically accurate’ information if they receive federal funding that state lawmakers directed away from Planned Parenthood.”

The text of the bills has not yet been released, but the “harassment” bill would likely establish buffer zones around abortion clinics, forcing pro-life protesters to stand a certain distance away. It is unclear what information the final bill would require CPCs to provide, but pro-abortion legislators in other states have attempted to force pro-life CPCs to advertise assistance for patients to obtain abortions.

In a joint press conference with Planned Parenthood Advocates of Ohio president Stephanie Kight, State Representative Greta Johnson declared, “We are the train and we are carrying the message we will not tolerate further infringement of a constitutionally protected right to abortion care.”

The bills are unlikely to pass the Republican-controlled legislature, which is considering legislation to ban abortions sought due to Down Syndrome and defund the state’s Planned Parenthood affiliate, but Johnson asserted it is her job “to introduce legislation that moves Ohio forward.”