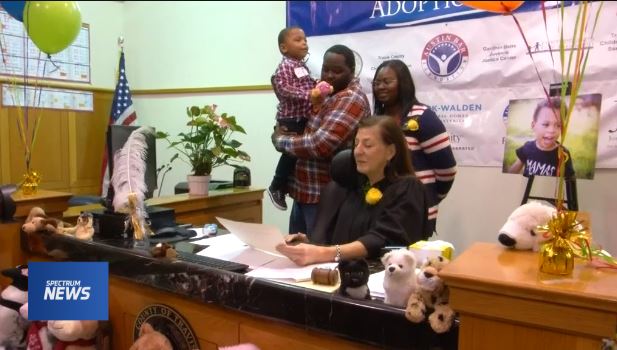 The annual Austin Adoption Day celebrates adoptive families and raises awareness for the need for foster and adoptive families. At this year’s event on November 7th, 39 children were adopted into 23 families, including a little boy who found his forever home with his former nurse and her husband.

Taneeka Ingram was a home health nurse when she began to care for one-year-old Jakobe, who had been born prematurely at just 26 weeks gestation. Jakobe needed an oxygen tank and was fed through a gastronomy button in his stomach, according to Austin360. He had spent nine months in the Neonatal Intensive Care Unit and when he went home, she made visits to help care for him. It only lasted a few weeks, but Jakobe made an impression.

“He was a precious baby. He was so sweet,” she said. “I liked to sit there and hold him and rock him and play with him. I loved it.”

For two years, Ingram often thought of Jakobe and prayed for him. Then last October, she learned he was in need of a home after having been placed in foster care. Adoption recruiter Anna Parris of Wendy’s Wonderful Kids had been searching through Jakobe’s file and came across Ingram’s name and phone number. She reached out to Ingram to see if she remembered Jakobe and to update her on his situation, and asked if she would be interested in adopting him. Ingram absolutely was, but told Parris she would have to speak with her husband, Terrence Robertson.

READ: Single NICU nurse adopts her patient: ‘I had so much love for this baby’

“For me, it was already a yes,” said Ingram. “I talked to my husband that night and he was on board. He was like, ‘Call her!’ We had to wait until Monday to actually talk to her. It was dreadful.”

The couple had been wanting a child but struggled with fertility issues and had undergone treatments in an attempt to get pregnant. They had also been considering adoption. So when the call came about Jakobe, everything changed. They said they stopped fertility treatments because they knew they had found their son.

Ingram and her husband had to complete the six-month mandated process in order to become licensed foster parents but it was worth every minute. Jakobe was finally home with them in March.

“He had a great smile, and he just gravitated toward me,” said Robertson.

At the adoption ceremony earlier this month, Parris expressed her joy over Jakobe’s adoption. “I can’t think of a more serendipitous, made-in-heaven match. It is just the most perfect family for Jakobe.”

As for Ingram, she couldn’t be happier to have Jakobe as her son. “It’s like our baby found us,” she told Yahoo Lifestyle of adopting Jakobe. “I would have never thought that when I took care of Jakobe that I was taking care of our future child.”