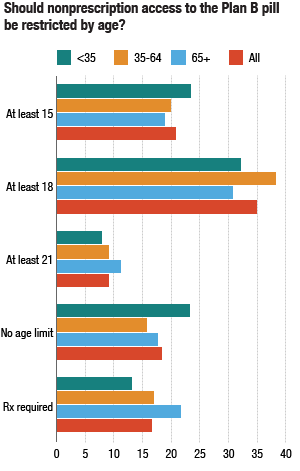 NPR released the results of a poll they conducted on the Plan B One-Step morning after pill. Michael Taylor, M.D., chief medical officer at Truven Health Anayltics told the Herald Online, “We survey 100,000 people annually to gauge the nation’s pulse on a variety of health related topics.’ He went on to say “We have been running this survey for over 25 years, and have addressed a wide variety of healthcare topics ranging from healthcare reform to drug side-effects. The data from the survey help us understand how consumers view the healthcare system.”

The first thing the NPR poll showed was the large amount of people that are familiar with the morning after pill. Almost 82% of people polled knew about the morning after pill, among women the number was higher at 85%. NPR asked this question on the poll, “Who should be allowed to get the pill without a prescription?”. They found that eighteen percent of people polled believed there should be no age minimum. Seventeen percent of people believed a prescription should always be required, regardless of the buyers age. Two thirds of people polled believe parents should have to give their permission before anyone under 18 buys the pill without prescription. NPR reports that even though the opinions were mixed, a minority agrees with the current unrestricted status of the pill.

When it comes to insurance 61% of those polled believe insurers should pay for the morning- after pill. Only 39% perfect believe it shouldn’t be provided by insurers. The National Poll had over 3,000 participants that were interviewed by telephone in the month of June. The full set of questions and responses can be read here.