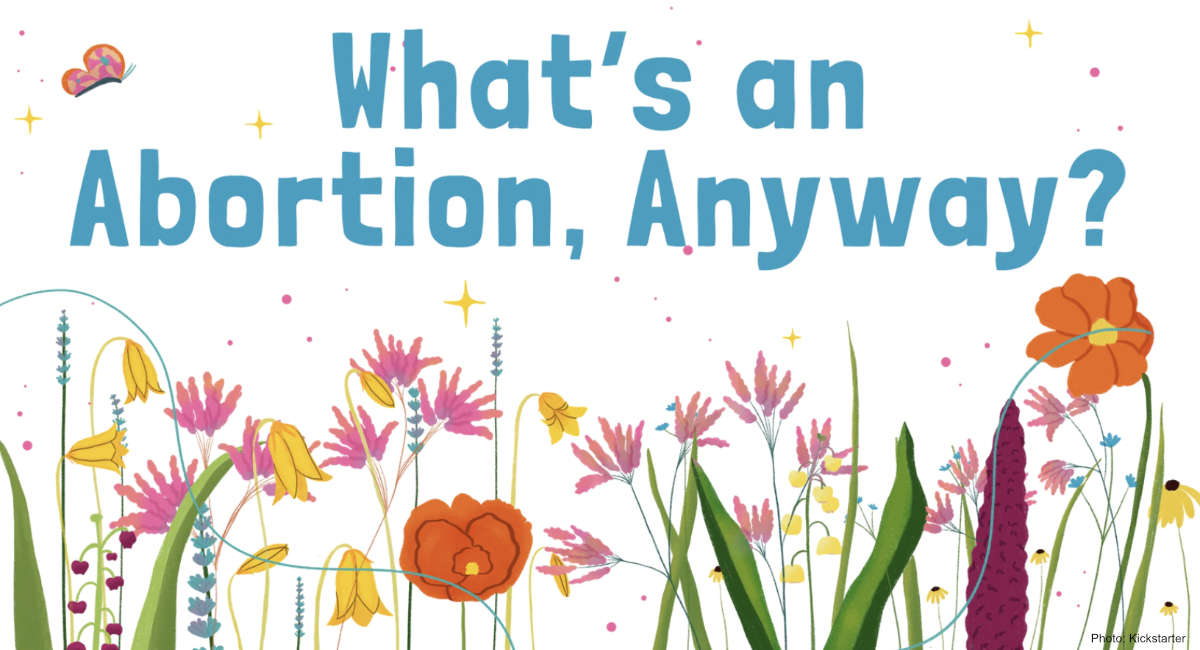 A new pro-abortion children’s book called, “What’s an Abortion, Anyway?” has been fully funded on Kickstarter and is now available to order. The book, written by self-described “white, queer, Jewish full-spectrum doula” Carly Manes and illustrated by “brown genderqueer cultural worker and full-spectrum doula” Mar/Emulsify, is said by its creators to be “medically accurate,” yet contains no photos of babies at different stages of development or details on how abortion procedures are carried out. Instead, the illustrations are flowery, filled with butterflies and bright colors.

This is not a realistic portrayal of abortion in any way.

According to the book, “When a person gets pregnant, many different things can happen. Some people are pregnant for many months and have a baby. That’s what happened with you! Some people have a miscarriage. A miscarriage is when a pregnancy isn’t healthy enough to keep growing.”

Only living things can grow, so to say that a “pregnancy isn’t healthy enough to keep growing” reveals that indeed a preborn child is alive. A miscarriage is the tragic loss of a child through no fault of the parents, which can leave them with emotional pain that can last a lifetime. It is nothing to simply shrug about.

The book goes on to explain that there are different ways to have an abortion — like having a “special procedure to remove the pregnancy from inside a person’s body. Other people take medicine to stop the pregnancy from growing bigger.” It tells children that everyone who has an abortion has a valid reason to do so, and should be able to do what they want.

Nothing about this paints a “medically accurate” picture of abortion.

Throughout the book preborn children are not referred to as human beings, or babies, or even embryos or fetuses. Instead, they are referred to only as “pregnancies,” which deliberately obfuscates the truth: it is not a “pregnancy” but a living preborn child who is violently “removed” from the safety of his or her mother’s womb during an abortion. The abortion industry frequently uses this term, which essentially leaves the human child out of the equation of abortion altogether.

The abortion pill is approved for use by the FDA up to 10 weeks gestation. The first of the two-drug regimen acts by blocking the natural pregnancy hormone progesterone. Without progesterone, the preborn child is deprived of nutrients, and dies. The second drug then induces labor and the dead child is expelled from the uterus. Many women have reported experiencing intense pain and horror during these procedures, and some have even seen the remains of their children, who even at this young age are recognizable as human beings.

A first-trimester surgical D&C abortion kills a preborn child with a strong suction machine that essentially vacuums the child out of the womb which such intense force that the fragile child is torn to pieces.

A second-trimester surgical D&E abortion kills preborn children when the abortionist dismembers their legs and arms from their torsos. Their skulls are then crushed using forceps. Abortion workers must essentially piece the child back together to ensure all body parts are accounted for, to prevent infection in the mother.

A third-trimester induction abortion involves placing a needle through the mother’s abdomen into the preborn child’s head or heart. This injection of digoxin or other feticide puts the child into cardiac arrest. Days later, the mother delivers her stillborn baby.

These heartbreaking and graphic videos reveal the actual truth of abortion (warning: graphic). Abortion is not simply “ending a pregnancy” as giving birth ends a pregnancy. It is the intentional and violent killing of a living, innocent, defenseless human being.

The only thing accurate about this book is the claim that women may feel “sad or lonely” after their abortions, a fact often denied by the abortion industry. The book also gets it right to say that women who have had abortions “deserve to be treated with love and respect.” But we can love both mothers and their children, by treating preborn children with love and respect. Killing is not caring.

The book’s creators say they are “full spectrum doulas,” which means they assist women with births as well as abortions. According to LifeSiteNews, Mar/Emulsify has taken part in at least 2,000 abortions.

Though they claim to have created the book to “honor” all who have had abortions, neither of the women seems to be concerned with the negative emotional effects the idea of abortion might have on a living child. When presented with an image of a fetus, children instinctively know that it is a baby. Many sibling survivors of aborted children have also struggled with the realization that their own mothers could have ended their lives during pregnancy, too.

The claim that this book is accurate is false, but the horror and injustice of abortion is so intense that its supporters continually find the need to use euphemisms and flowery language to mask it. Had the authors truly been honest enough to describe abortion or show what it looks like, readers would be left with a far different impression.

In contrast, the pro-life book, “Pro-Life Kids” by Bethany Bomberger, co-founder and Executive Director of The Radiance Foundation, reinforces the value of every human life. It is available in the Live Action store.