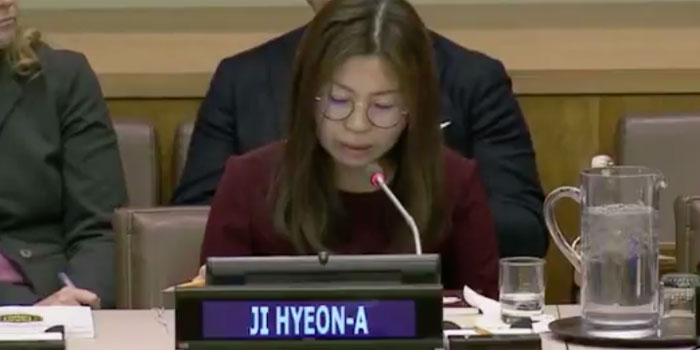 A harrowing tale from a North Korean defector has made headlines around the world. United Nations ambassador Nikki Haley held a meeting to discuss the abuses of human rights in North Korea in a meeting titled, “North Korea Human Rights: The Terrifying Experiences of Forcibly Repatriated North Korean Women,” which was hosted jointly by Australia, Canada, France, Japan, the Republic of Korea, the United Kingdom, and the United States. Ji Hyeon-A escaped from North Korea three times, but along with other asylum seekers, she was returned back each time when she was caught in China. She and other defectors were then tortured, beaten, imprisoned, and in some cases, executed. Often, defectors are also further victimized by being subjected to sexual violence, hard labor camps, and forced abortions.

Ji ultimately escaped to South Korea and spoke of the conditions that she and other women were forced to live under. “Pregnant women were forced into harsh labor all day,” she said. “At night, we heard pregnant mothers screaming and babies died without ever being able to see their mothers.”

The second time she tried to escape into China, she was caught by human traffickers and sold to a farmer. “He was nice to me, but he had huge debts so I had to work on his farm to pay off his debts,” she said. But when Chinese authorities caught her, they sent her back to North Korea — and she was three months pregnant. North Korea does not tolerate mixed-race children, so Ji was forced to have an abortion. “My first child passed away without ever seeing the world, without any time for me to apologise,” she said in tears.

Ji also criticized the Chinese government for sending North Korean defectors back, saying that the country is “a terrifying prison and the Kims are carrying out a vast massacre and it takes a miracle to survive there.”

Britain’s U.N. ambassador, Matthew Rycroft, praised Ji for her bravery and said that North Korea’s crimes, such as “forced abortions, summary executions, hard labor, rape: those are conditions that amount to crimes against humanity.” For her part, Ambassador Nikki Haley said that the stories of the North Korean people needed to be told. “The regime is using that power to develop an unnecessary arsenal and support enormous conventional military forces that pose a grave risk to international peace and security,” she said. “Their menacing march towards nuclear weapons begins with the oppression and exploitation of ordinary North Korean people.”