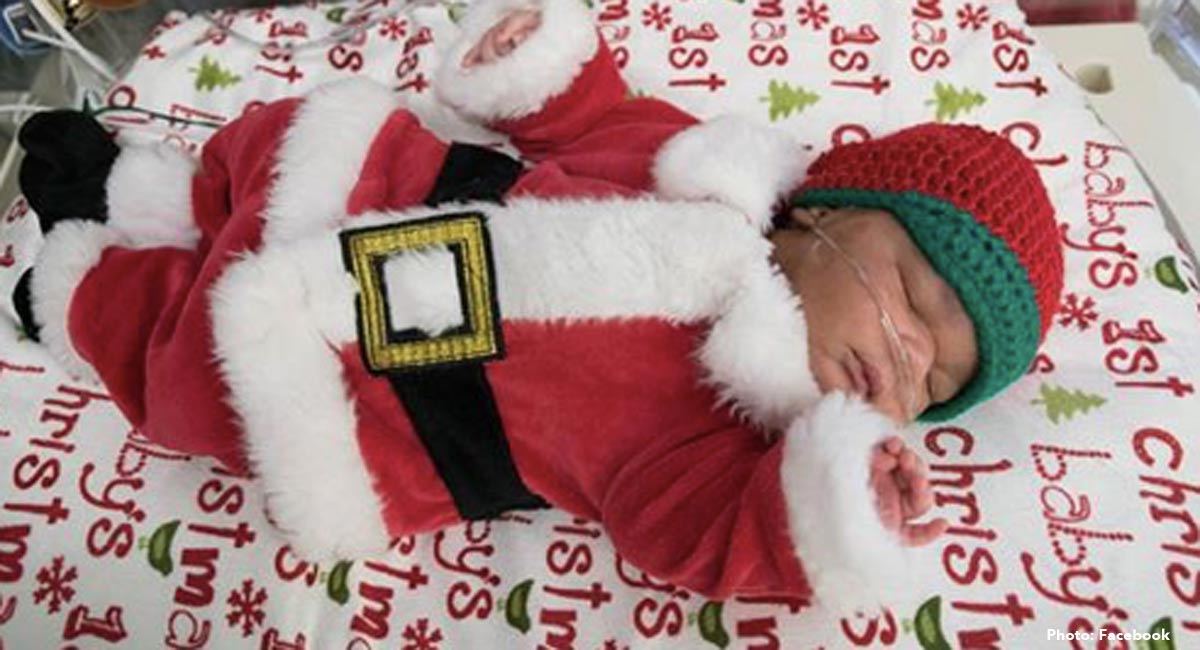 It’s difficult enough to watch as your son or daughter fights for his or her life, but the parents of premature babies often find themselves spending the holidays in the hospital, making an unhappy situation even more difficult. However, in hospitals across the country, doctors and nurses in Neonatal Intensive Care Units (NICUs) are doing the best they can to bring a little Christmas cheer to families going through a difficult time.

At Wolfson Children’s Hospital in Jacksonville, Florida, NICU staffers arranged for a visit from Santa Claus for their littlest patients:

At Spectrum Health Helen DeVos Children’s Hospital in Grand Rapids, Michigan, Dr. Al Jones (a retired neonatal specialist) dressed up as Santa to visit the babies, along with March of Dimes family support program coordinator Amy Nyberg. This is Jones’ sixth year donning the red suit, and it’s meaningful for the parents. “Families love it,” Nyberg said. “Santa comes and they are able to hit that milestone and have that memory of baby’s first photo taken with Santa.” The preemies get a photo with Santa, while Nyberg gives candy canes and toys to their siblings. “This is a way for the families to take a break from their worries and just enjoy the holiday season,” Jones added.

The hospital also arranges for an annual toy drive for their patients.

At Henry Ford Health System in Detroit, Michigan, babies got a visit from Santa and preemies were dressed in adorable Christmas outfits, ready to celebrate the season.

At Baptist Health in Louisville, Kentucky, parents got the sweetest stocking stuffers ever, with babies wrapped in adorable Christmas stockings. It’s the hospital’s holiday tradition. “It makes it a little bit more personal for the families here as well, because when you’re in the hospital (at) this time of year, the moms and dads may be away from other children and other family,” Leann Baker, a neonatal nurse practitioner, said. “This is just a way to try to make it a little more special for them at this time of year and maybe a little less homesick.”

At Methodist Children’s Hospital in San Antonio, Texas, Santa donned a cowboy hat for his meeting with preemies, bringing both Christmas cheer and Texas spirit to the tiny babies:

Methodist Dallas Medical Center features its own special 12 Days of Christmas, with “12 Days of Tiny Santas,” spotlighting different babies in the NICU — including some very festive triplets — sporting crocheted hats made by NICU nurses:

At a hospital in Bellevue, Washington, Santa dropped by to pay a visit to the adorably tiny preemies.

UPMC Magee-Womens Hospital in Pittsburgh had a more unique take on the season: instead of stockings, nurses knitted ugly sweaters for what has to be the world’s cutest ugly sweater Christmas party!

Santa also came to visit preemies at Banner Desert Medical Center in Mesa, Arizona. “The babies’ first Christmas is just a magical thing,” Santa said, with NICU nurse Jackie Rowe explaining, “It’s really special for us to bring Santa to them because it’s their first Christmas.”

Tiny Christmas trees were given to preemies at Alfred I. Dupont Hospital for Children/Nemours in Wilmington, Delaware, which families said helped to boost the Christmas spirit.

But that wasn’t all — the hospital also had a special visit from the Grinch for their older patients!

Premature babies are able to survive at younger and younger ages, especially if they’re given active care, but any parents spending holidays in the hospital can face difficulties and discouragement. Bringing holiday cheer to families going through some tough times makes a difference, and celebrates the lives of these precious preemies.