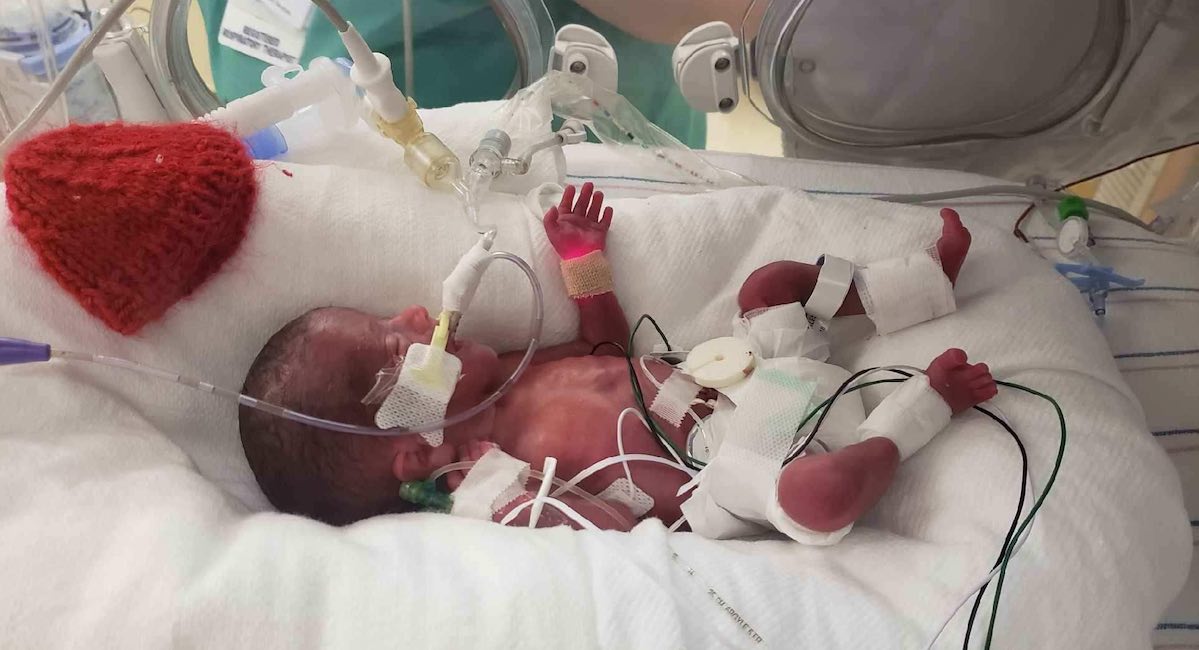 September is Neonatal Intensive Care Unit (NICU) Awareness Month, and it’s hitting home particularly for one grateful family in Pennsylvania. They’re celebrating over a year with their NICU miracle baby, born weighing just one pound and 9 ounces and measuring just under 12 inches long.

Baby Mackenzie Tolan was due on August 18, 2018, but came early on May 14th after her 17-year-old mom Alesa Filipski developed preeclampsia, a serious complication of pregnancy that can be life-threatening for the mother and/or her baby. Alesa’s blood pressure had been running very high, a typical pre-eclampsia symptom, and then dropped suddenly and unexpectedly when she received treatment in the hospital. When Alesa’s blood pressure dropped, little Mackenzie’s heart rate dropped and did not recover. So, at 26 weeks and 4 days, she was born via emergency cesarean section. Thus began the family’s 90+ day journey in the NICU.

READ: These 4 ‘micro-preemies’ show that every life deserves a chance

Mom Alesa recalled to Live Action News that Mackenzie’s hospital stay was filled with “a bunch of ups and downs, each step forward came with two steps back.” The whole family had to adjust to “alarms going off, wires everywhere, no privacy.”

Mackenzie’s aunt, Amber Biunno, recalled, “Most of the nurses were very kind, calm and very explanatory of anything/everything that was happening. Other families were also kind. It was still a very stressful and scary experience especially if her heart stopped or her heart rate started to drop and the machine alarms went off.”

The basic daily “routine” involved a bottle feeding (because breastfeeding would require too much energy for such a small baby), temperature check, and diaper change every 3 hours. Mackenzie spent her first few months in a closed, temperature-regulated isolette, since babies born so prematurely have significant trouble maintaining their own body temperature. The family was eventually allowed to hold her when she transitioned to an open isolette, but even then only for an hour at a time. 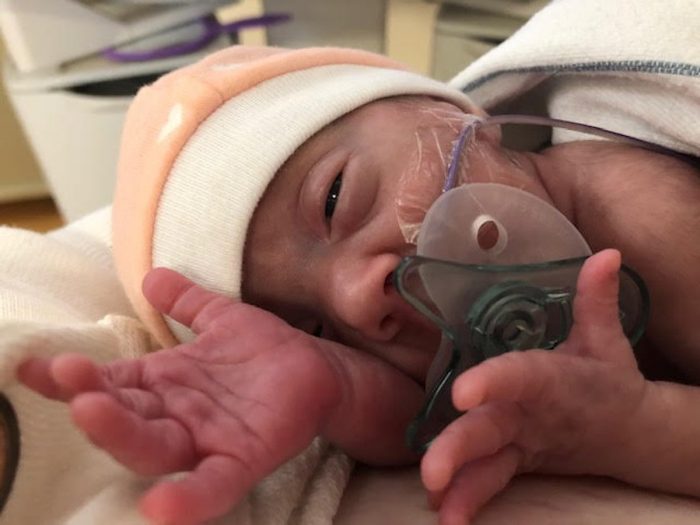 Mackenzie at almost a month old

While the hospital environment was a far cry from the normalcy of home, mom Alesa learned to love her baby in the ways that she could, pumping milk between feedings and doing skin-to-skin time as much as possible. Grandma Michele Filipski stayed with Mackenzie whenever Alesa could not be with her, and aunt Amber visited often.

In order to be discharged home, Mackenzie had to meet several milestones. She had to “eat” almost 2 ounces at a time on her own without a feeding tube, maintain normal oxygen levels on her own as well as body temperature and heart rate, and show a steady weight gain. Finally, she had to be big enough to ride home safely in a car seat. Now, at 15 months old, Mackenzie’s only ongoing doctor appointments are for monthly physical therapy.

Mackenzie’s mother, grandmother, and aunt all agreed that the most challenging part of being in the NICU was “not knowing what the next day, let alone the next hour, would bring.” Aunt Amber disliked being several hours away and only getting to see her niece once a week. Mom Alesa recalled the challenge of “being away from home (hospital was almost 3 hours away), being young and not having nurses take you seriously. They all looked to (Mackenzie’s grandma).”

For her part, Grandma Michele says “work was put on hold to be there for (my) daughter and granddaughter. Ronald McDonald house was a blessing — but at the same time, they wouldn’t allow a 17-year-old without a parent.”

Mom Alesa shared that the biggest positive surprise from their time in the NICU was when, at just 12 hours old, Mackenzie was able to come off of the ventilator/breathing machine. Those 3 months continue to impact Alesa, who shared with Live Action News that she realized how precious each life is. “[My time in the NICU] changed the profession I want to do — I want to do NICU nursing now. It gave me a renewed sense of what God can do and His miracles he can perform, how amazing He is. The alarms going off gave me quite a scare because each time there was a chance of something terrible happening, but I had the faith that God was doing what He needed and bringing life back into such a fragile life.”