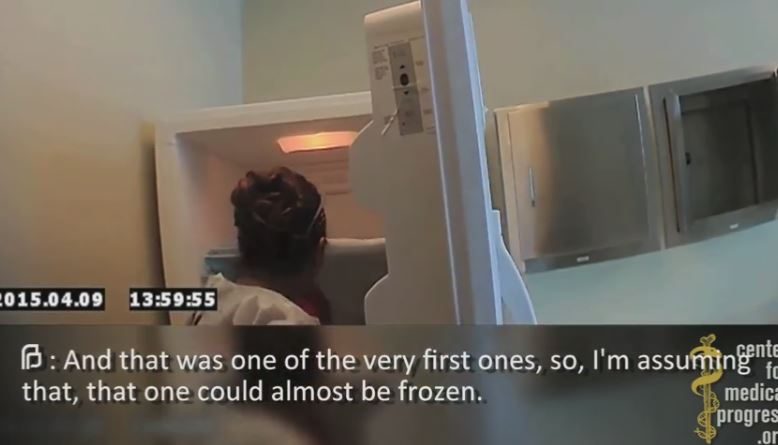 In 2015, the world was given an unprecedented look at what happens to the bodies of babies killed in abortion. Undercover footage from the Center for Medical Progress’s investigation of Planned Parenthood showed the industrial-sized, upright freezer of a Houston, Texas, abortion facility containing the dead bodies of aborted babies.

Undercover investigators posing as fetal tissue buyers asked technicians at the Houston Planned Parenthood mega-abortion facility if there were any “fresh specimens” they could evaluate. A Planned Parenthood employee laughed and said, “We had a really long day and they’re all mixed up together in a bag.” She said if she’d been given a warning about the buyers’ visit, she “would have saved something” for them to see before freezing the dead bodies.

After some discussion, the Planned Parenthood employees decided to open the freezer to extract the body of a 20-week twin from early in the day to demonstrate how “intact” the “specimen” was — in other words, how many organs of the five-month-old preborn baby were not mutilated beyond recognition when the child was killed in the abortion.

In the months and years following the release of this shocking inside look at the abortion industry, Planned Parenthood and its supporters attempted to discredit the footage as “heavily edited,” despite the fact that the Center for Medical Progress released the full-length footage. Furthermore, independent forensic analysis of the footage by Coalfire determined the videos are “authentic and show no evidence of manipulation or editing.” While Planned Parenthood focused on discrediting the videos and the journalists who made them, there was no explanation offered for what the Planned Parenthood employees said and did on-camera. No one attempted to say that the bags of bodies in the freezers were fake.

It’s not just this Planned Parenthood that has such a freezer. The abortion industry rarely speaks publicly about what happens to the “POC” (products of conception), known to everyone else as babies. From other undercover footage and state health department inspection reports, however, we know that what to do with the bodies is a big problem for the abortion industry, and many abortion facilities have freezers full.

After the Center for Medical Progress captured this grotesque reality on undercover video, Planned Parenthood asked the world to ignore it and move on, and for the most part, it did.

Then, an unexpected reminder of those frozen bodies emerged in Germany earlier this year.

A woman, identified only as 46-year-old Steffi S., is now serving a nine-and-a-half-year prison sentence for killing two newborn babies, one in 2004 and one in 2008. According to news reports, “During the trial, a coroner testified that the babies had been killed by packing them in a plastic bag and putting them in a freezer where they slowly suffocated.”

Steffi hid the pregnancies and gave birth to the babies alone — first a girl, and then four years later, a boy. Immediately after giving birth to the healthy babies, she put them in the freezer where they died and stayed hidden for years. People seem most shocked by the callous treatment of such vulnerable babies. The story ran under demonizing headlines, like, “Evil mum froze newborn babies to death after stuffing them into freezer in plastic bags.”

People around the world recognize the dignity of the girl and boy whose lives ended horrifically shortly after their births. How was the twin violently ripped from his mother’s womb and frozen in a Planned Parenthood freezer in Houston, Texas, different from Steffi’s children? In the video below is a D&E dismemberment abortion, in which a preborn baby, most often in the second trimester, is ripped apart. The “crushing” of a child’s upper torso in an abortion — referenced by Dr. Deborah Nucatola of Planned Parenthood in the very first CMP video — doesn’t happen in a first trimester suction abortion, but in a D&E, described below by former abortionist, Dr. Anthony Levatino:

Our laws rightly recognize the human rights of Steffi’s babies. Shouldn’t we work to change the laws so that the babies at Planned Parenthood are also recognized as human beings? An abortion does not remove something from the womb, an abortion removes someone; someone who is often stored in a plastic bag in the freezer, just like Steffi’s babies.

Where are the outraged headlines on their behalf?