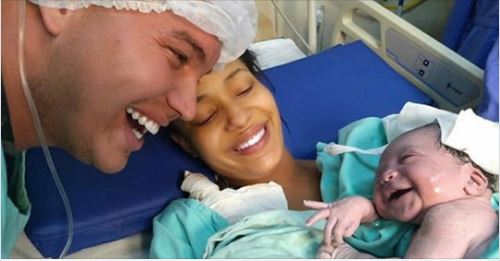 In an adorable picture being shared across social media, a newborn baby girl was captured smiling at her father while lying on her mother’s chest. What makes this picture so touching, is that baby Antonella smiled the moment she heard her father’s voice, which she recognized from hearing it when she was in the womb.

“He always told her that he loved her so much,” mother Tarsila told SoNoticiaBoa. “Good morning when I went to work, arrived good afternoon, said I’d always be there, kept stroking my belly… And amazingly it always seems at the same time every day she started to move.”

When her father Flavio spoke the same words to her that he had been saying for months while she was growing in her mother’s womb, Antonella immediately reacted with a smile, letting her Dad know that she knew him. What makes it even more special for Flavio, is that Antonella was born in Rio de Janeiro on August 11 – Father’s Day in Brazil.

“I thought I knew what a feeling of true love was, until I looked at that most sincere smile in the world… it was [there] that I could be sure what love is,” said Flavio.

According to the Mayo Clinic, just 16 weeks after conception, preborn children begin to hear. By 26 weeks, a preborn child will react to noises outside the womb and can be calmed by the sound of her mother’s voice. A 2017 study found that preborn children can even distinguish different languages. Researcher Utako Minai, associate professor of linguistics at the University of Kansas, said “Fetuses can hear things, including speech in the womb. It’s muffled, like the adults talking in a ‘Peanuts’ cartoon, but the rhythm of the language should be preserved and available for the fetus to hear, even though the speech is muffled.” A separate study pointed to the fact that preborn children begin learning their native language, being able to particularly recognize the vowel sounds. Newborns can also recognize specific wording.

“[A]fter women repeatedly read aloud a section of Dr. Seuss’ ‘The Cat in the Hat’ while they were pregnant, their newborn babies recognized that passage when they heard it outside the womb,” explained journalist Annie Murphy Paul in a TED Talk. “My favorite experiment of this kind is the one that showed that the babies of women who watched a certain soap opera every day during pregnancy recognized the theme song of that show once they were born.”

It’s remarkable what preborn children are capable of and an important reminder that each preborn child is a unique human being who is learning about the world while still safely tucked away in her mother’s womb. Doctors recommend talking and singing to your preborn children to bond with them before birth.