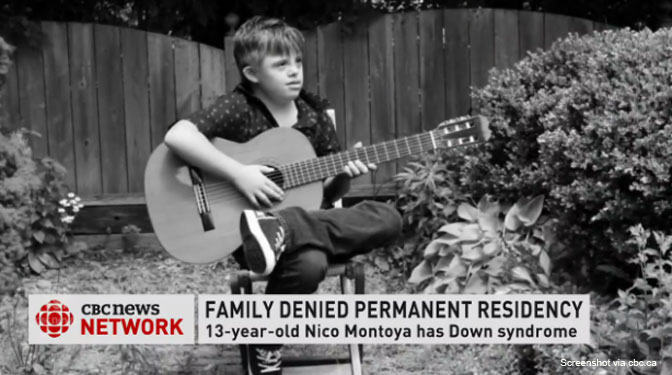 Felipe Montoya and his family moved from Costa Rica to Canada so he could work as a professor of environmental studies at York University in Toronto. He’s currently working full-time, and has tenure. The Montoya family has been happy in Ontario, so they decided to apply for full-time residency. The family all underwent medical exams as required for the application, and all were declared healthy. But then, they received shocking news: they could be forced to leave the country, for a reason that Montoya couldn’t believe. They were deemed inadmissible for citizenship in Canada because his son, Nicolas, has Down syndrome — and would be too much of a burden on the Canadian health care system.

Citizenship and Immigration Canada has told Felipe Montoya that his son’s condition makes him inadmissible to Canada because of the potential burden the child would place on the health care system.

Immigration lawyers say that when a whole family applies for residency, a finding of inadmissibility against one of its members winds up applying to everyone on the application.

… “I have determined that your family member Nicolas Montoya is a person whose health condition might reasonably be expected to cause excessive demand on social services in Canada,” reads a letter sent to Montoya. “An excessive demand is a demand for which the anticipated costs exceed the average Canadian per capita health and social services costs, which is currently set at $6,387.”

Montoya points out that Nicolas uses the same resources that his daughter, who is not disabled, does. CIC said that Nicolas is only able to function at the level of a three-year-old, yet Nicolas does not receive any extra accommodations at the school he currently attends, which is a public school. There is no logical reason for the Montoya family to be kicked out of the country — Nicolas is demonstrably not a burden — yet they’re still facing having to leave. And Montoya is more than aware of what the real reason is.

“The only fact I imagine that they are basing it on is this idea … that Down Syndrome people are all sick and require intensive care,” he said in an interview. “This is a stigma, and it’s not based on the individual case.” And sadly, this is apparently not uncommon.

Discrimination and negative attitudes towards people with disabilities is hardly surprising in Canada, where health care is rationed and lives are measured by what the government thinks they’re worth. Robert Latimer’s case is an especially horrific one. Latimer killed his daughter, Tracy, when she was 12. The reason? Because Tracy had cerebral palsy and Latimer said she was “suffering”. Latimer went to prison, but his sentence was short, considering he murdered a child. His decision was widely celebrated in Canada, even though the medical professionals who worked with Tracy disputed Latimer’s claims that she was suffering and led a miserable life full of pain. But she was only a girl with a disability, right? So her life clearly didn’t matter as much.

It would be unacceptable for a country to kick a family out because they had a black child, or for a father to kill his child for being gay. Discrimination is not tolerated in most circumstances. Yet discrimination against people with disabilities is, by and large, accepted. People look the other way. They frown on abortion, unless it’s a baby with a disability being aborted. People literally applaud the mercy killing of people with disabilities, even when the disabled people in question are not dying or terminally ill. And people can be kicked out of a country, not because they committed a crime, but simply because they have a disability.

It’s a despicable statement about us as a society, that this continues to go on.