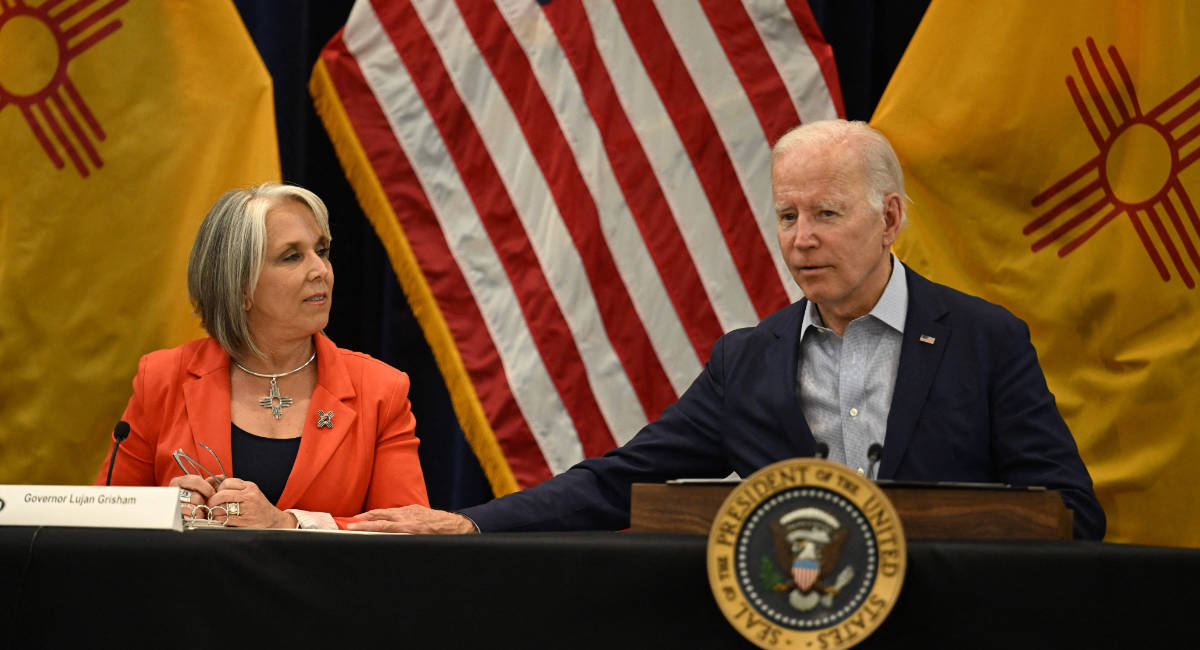 The Governor of New Mexico has signed an executive order directing the Department of Finance and Administration to designate $10 million for a state-funded abortion facility.

Gov. Michelle Lujan Grisham’s order, signed alongside the New Mexico Commission on the Status of Women and state legislators, also directs the state Department of Health to “leverage State resources to expand access to reproductive healthcare, including abortion in underserved areas of the state.” In addition, the order directs DOH to “access the feasibility” of providing the abortion pill in public facilities the DOH oversees.

“The executive order also directs the Department of Health to develop a detailed plan to leverage resources to expand abortion access in rural and underserved parts of the state, work to make abortion medications available in state public health clinics, and to reduce wait times and increase access statewide. Finally, the order directs the Human Services Department to implement policies that improve that efficiency and sustainability of reproductive health care access in New Mexico,” the release adds. 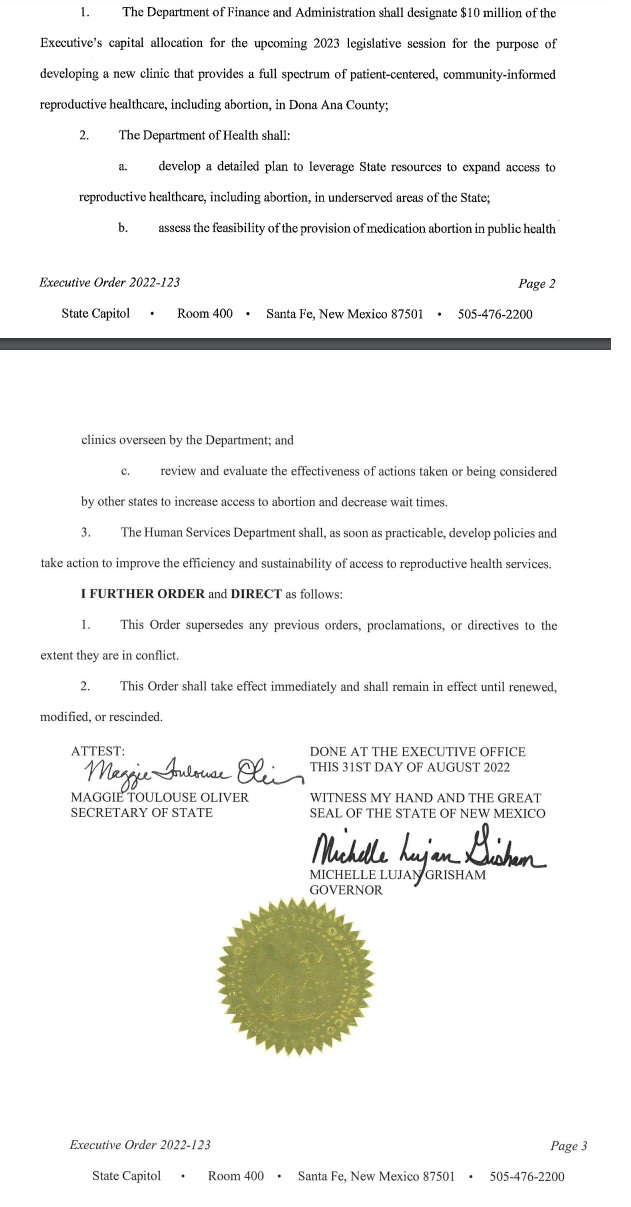 The Albuquerque Journal reported that the abortion facility would be built “in Doña Ana County — likely in or around Las Cruces” and would come from “infrastructure funding allocated annually by the governor.” The paper also stated, “The governor’s infrastructure funding is typically folded into a larger capital outlay bill that’s voted on by lawmakers, who also inserts hundreds of their own projects. Given that background, the pledged funding could be largely contingent on the outcome of the November general election.”

The Las Cruces Sun reported similarly, writing, “The discretionary funds will come from appropriations during New Mexico’s 2023 legislative session which will open Jan. 17. The governor said as yet no location or fiscal agent to handle the funds had been selected for the clinic as yet.”

READ: New Mexico sets the stage to become a destination for abortion seekers

New Mexico State Senator David Gallegos called the move “really tragic” and claimed it would cause the state to be known as “the abortion capital of the world.” In an emergency webcast with pro-life leaders, the Senator suggested that pro-lifers concerned about the move need to contact their state legislatures.

Pro-lifers in New Mexico were outraged, claiming that since Texas’s trigger ban outlawing most abortions took effect in late August and New Mexico is one of the closest states where the industry is directing women to travel for abortion, that their taxpayer funding is actually going to assist Texas women with abortion — not women in New Mexico.

Mike Seibel, Senior Counsel for Abortion on Trial, claimed in a webcast that “New Mexicans don’t want abortion. We have one of the lowest in-state abortion rates in the country and its at about seven percent. We have less than 3,000 abortions in the country,” he also stated. “This is a complete diversion to provide New Mexico as Texas’s back alley abortion clinic.”

Between 2017 and 2018, Seibel claimed the State’s Medicaid statistics showed that about 80% of abortions occurred in Albuquerque, with only around 200 occurring in Doña Ana County. “So we’re spending $10 million for two to three hundred New Mexico residents to ‘have access'” to abortion, Seibel claimed.

Mark Cavaliere, director of Southwest Coalition for Life, pointed out that the move “is coming right after we’ve seen already an influx in Las Cruces going from no abortion providers a year ago to now — this is going to be four?” Jackson Women’s Health Organization, the abortion facility plaintiff in the Dobbs v. JWHO Supreme Court case that led to the overturning of Roe v. Wade, is relocating to Las Cruces, as are Planned Parenthood and others, Cavaliere pointed out. “And if that’s not enough, now we have the New Mexico Governor directing taxpayer money — $10 million — to a[n] abortion center in New Mexico.”

Seibel said that given the history regarding poor standard of care by New Mexico abortion providers, it is likely women will get injured. “Our abortion industry here in New Mexico has a horrible track record being unregulated and unsafe,” he said. “We are becoming a culture of death for the United States, they are shipping them here in droves.”

According to Seibel, the move means that, “Not only [are] your tax dollars going to go out there but we’re going to see a healthcare crisis,” he said. “We already have a shortage of nurses and physicians in the State of New Mexico due to the Covid restrictions and people moving out-of-state… and we’re going to continue to tax our healthcare system,. Additionally, it will be more women in the emergency rooms here in New Mexico just with the abortion pill alone.” 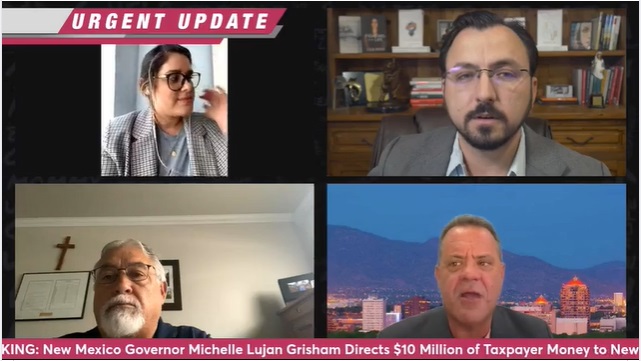 Dominique Davis, Project Defending Life’s Executive Director called the move “misguided” and pointed out that a rural area recently had to close a maternity ward due to a lack of providers. “So, why are we not putting money to things like this?” she asked. Davis suggested that the money would be better spent supporting maternal or prenatal care, which, when lacking, “might drive a woman to make an abortion decision,” she said. “We clearly have other needs here that are very important and critical for New Mexican families — men, women, children, the unborn child.”

Senator Gallegos believes funding abortion over the needs of New Mexican citizens is irresponsible. “You know we have veterans’ needs; we have homeless needs; we have mental health needs in this area in our state. But if you want to put something somewhere and you say you care, then why not put this toward the pregnancy centers and the maternity homes?”

Cavaliere urged pro-lifers to pray, fast, and take part in sidewalk advocacy in the upcoming days. “We’ve got to get our knees on the ground, get out on the sidewalk, to be that peaceful witness,” he stated.