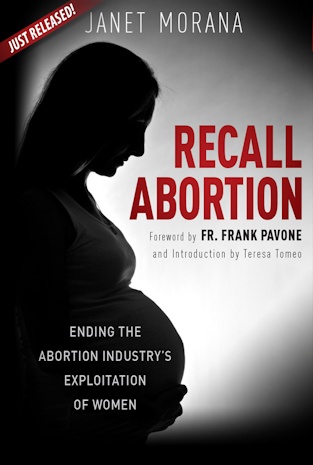 Abortion is a bad product…yet it’s still on the market.

“For decades I have been working to reverse this tragic decision that was made in my name. Janet Morana’s recall effort might be the way to finally end the catastrophe of abortion.” -Norma McCorvey, “Jane Roe” of Roe v. Wade 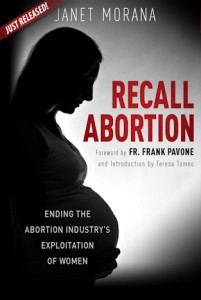 A new book by Janet Morana, Recall Abortion, sheds light on abortion as a bad product. In a brilliant take on the issue, Morana outlines the plethora of reasons why, if abortion were any other product, it would have been recalled long ago. It has been peddled for far too long, Morana says, as she presents case after compelling case to support the position that abortion is overdue for a re-examination by the medical profession and society at large.

There is a long history of recall in our nation. Products like the Ford Pinto, Firestone tires, Toyota cars, and the Dalkon Shield IUD, just to name a few, were recalled because of the harm they did to some Americans. Abortion’s track record is far worse than any of these products.

Morana is a veteran pro-lifer. Many know her from EWTN’s “Defending Life” program, which she hosts with Father Frank Pavone. Others know Janet from her work with the Silent No More Awareness Campaign, which she co-founded. It is from her work with Silent No More that Janet is so well-acquainted with the effects of abortion on women and men. Drawing from the many testimonies that Silent No More has collected, Morana masters the art of the poignant anecdote in the book. Every point she makes is supported by one or more testimonies from real-life women and men who experienced the consequences of the abortion industry lying to them about the efficacy of the abortion product.

The work concludes with practical applications of how we as pro-lifers can work to recall abortion. The plan of action is simple and doable. “We have laws to protect us from bad products,” Janet says, “and those laws work. Isn’t it time to put consumer protection laws to good use and recall abortion?”