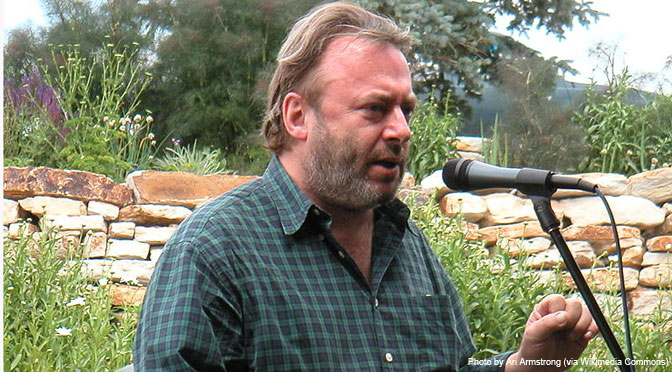 Many probably remember Christopher Hitchens for rising to fame as the atheist polemic who irreverently titled a book, god Is Not Great. But while he was often classified among the hardcore “New Atheists” – including Richard Dawkins who gained notoriety on Twitter for saying that aborting a Down syndrome baby is the moral thing to do – Hitchens didn’t march in uncritical lockstep. “Don’t assume I buy into the whole platform,” Hitchens told his good friend Larry Taunton, executive director of Fixed Point Foundation, in a conversation recorded in Taunton’s latest book, The Faith of Christopher Hitchens: The Restless Soul of the World’s Most Notorious Atheist. Taunton reveals that Hitchens, who died of esophageal cancer in December 2011, was a conflicted and searching soul behind the scenes, and that this was reflected in his contradictory persona and character. “There is just something in me that is not prepared to equate a child with a piglet,” Hitchens says in another conversation within the book, while reflecting upon the drastic worldview of Peter Singer, who has argued for infanticide to be legal up to 28 days after birth. “That something is called conscience,” writes Taunton. “But this was unambiguous theism, as he well knew. Admit it or not, it was the Judeo-Christian notion that man is made in the image of God, qualitatively different from the other animals, and therefore set atop the created order. Singer would be the first to point out that this view finds no resonance in atheism.”

Although Hitchens was not a scientist, he grasped the reality of conceived human life better than the prominent scientists of the New Atheist movement, declaring that he was pro-life “for materialist reasons. It seems to me obvious from the discoveries of biology and embryology that the concept ‘unborn child’ is a real one. .. And it has to be granted to the Church that it has made this a centerpiece of its ethic and its morality.”

Hitchens was personally impacted by the abortion of a younger and an older sibling, which his mother did not inform him about until shortly before she committed suicide. “Abortion after the fact of his existence might remain abstract,” explains Taunton. “But the killing knife striking to one side and then the other of him, that made the reality of abortion personal. There but for the grace of – what? – go I.”

The Faith of Christopher Hitchens centers around Taunton’s unique friendship with Hitchens, whom he knew in private to be “a man who was weighing the cost of conversion,” but whose ultimate decision is unknown to us.