Nebraska Lt. Gov. Mike Foley, currently the acting governor, issued a proclamation on January 28 in which he officially recognized a pro-life flag for the state. A press release detailing the proclamation said that Foley did so with the full support of Gov. Pete Ricketts. Ricketts took to Twitter to applaud Foley’s gesture, saying, “Nebraska is a pro-life state. We now have a state recognized pro-life flag to celebrate babies and the mothers who nurture them in the womb.”

The pro-life flag is a symbolic gesture designed to unite everyone within the pro-life movement. In the press release, Foley’s office detailed the importance of the flag for the state:

Pro-life supporters have created a pro-life flag to celebrate babies and the mothers who nurture them. It features the footprint of a child encircled by a mother’s hands—set within two stripes to highlight the two lives present in pregnancy.

It is fitting and proper for Nebraskans to exercise their First Amendment rights to proclaim the human dignity of the unborn. 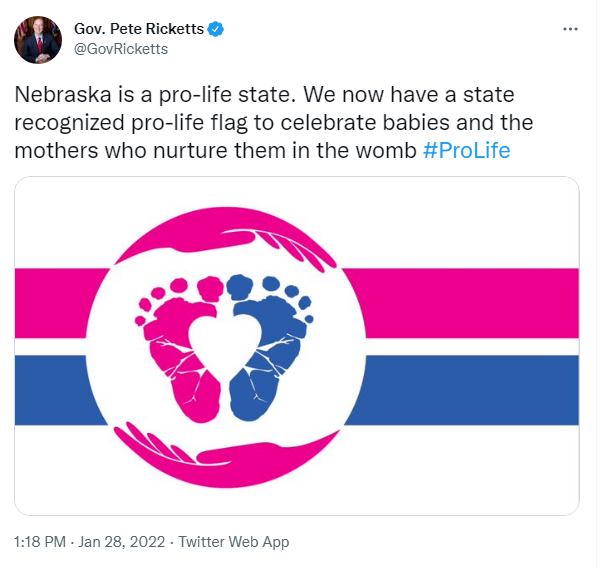 The proclamation marks the second occasion in a week that Nebraska’s governor has publicly supported the pro-life movement. On January 22, the anniversary of Roe v. Wade, Gov. Ricketts issued a proclamation that called the day a Statewide Day of Prayer for an end to abortion. Ricketts used the occasion to call on all Nebraskans to pray for an end to abortion, and to provide more help to women, children, and families in need. Again, he reiterated his pro-life position, saying, “Nebraska is a pro-life state. Nebraska state law states that it is ‘the will of the people of the State of Nebraska and the members of the Legislature to provide protection for the life of the unborn child whenever possible.’”

State legislators are also working to make the state more pro-life. Just recently, Senator Julie Slama introduced legislation that would prohibit abortion after a fetal heartbeat is detected. While opponents of the bill have even issued her death threats, Slama hasn’t let that deter her positive outlook about the bill’s success, tweeting, “Standing in stark contrast to the threats I’ve received is the positive, hopeful message of the #prolife movement. Response to Nebraska’s Heartbeat Bill has been overwhelmingly positive, and I’m excited to pass this bill. 💜”