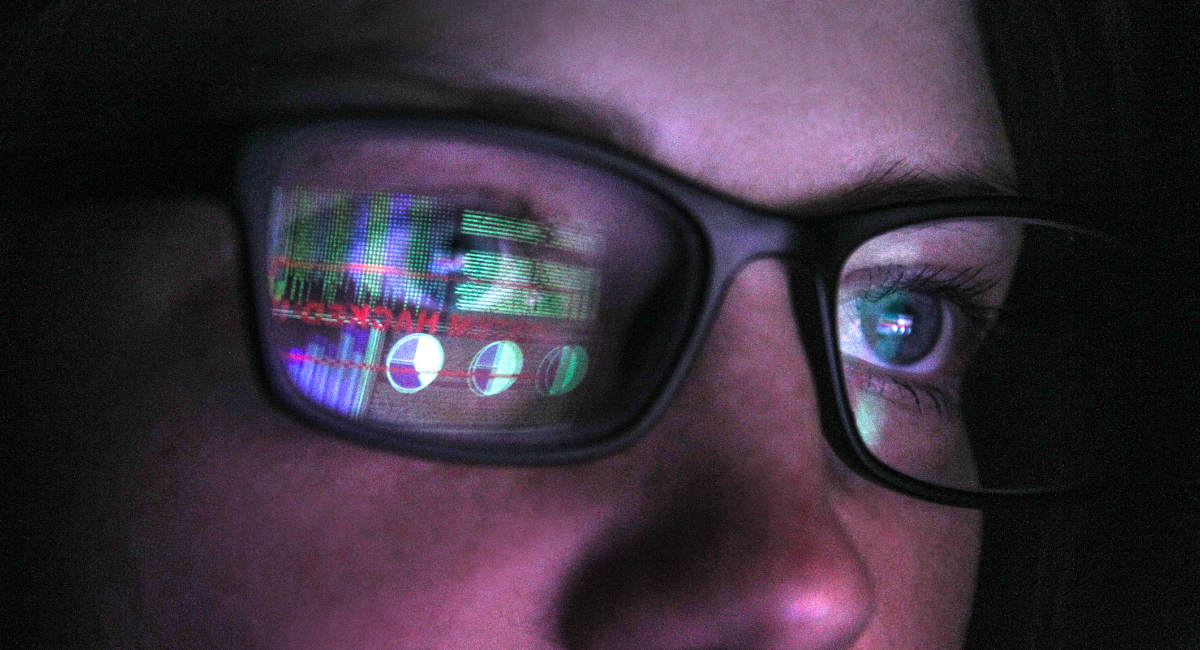 A review of abortion business websites in May revealed that “99.1% of US based abortion clinic web pages include third-party tracking, transferring user data to a median of 9 unique entities.” The findings were written in a research letter published in JAMA Internal Medicine, which alleges that abortion patient data could be exposed.

According to UPI, the new research, entitled “Prevalence of Third-Party Tracking on Abortion Clinic Web Pages” and co-authored by Dr. Ari B. Friedman (an assistant professor of emergency medicine at the University of Pennsylvania’s Perelman School of Medicine in Philadelphia), indicates that “virtually all U.S.-based abortion clinic web pages include a third-party tracking code that enables entities to sell or share browsing data with law enforcement or civil litigants.”

“Although third-party tracking is common on some health-related websites, the extent of tracking on abortion clinic web pages is unknown,” Friedman and his co-authors wrote.

Pro-abortion allies have expressed fears that certain apps or pro-life organizations like pregnancy resource centers could track women and collect their data in pro-life states, but have never concerned themselves with the abortion industry’s tracking.

“We assessed the prevalence of third-party tracking on abortion clinics’ web pages… In this cross-sectional study, we extracted the uniform resource locator (URL) of each National Abortion Federation [NAF] member facility on May 6, 2022…” Friedman noted.

According to UPI, “The researchers looked at the web address of 414 National Abortion Federation member facilities, and then visited each URL by using a tool called ‘webXray’ which detects third-party tracking. For each web page, the investigators recorded data transfers to third-party domains, according to the research letter. Typically, such transfers include a user’s Internet protocol, or IP, address and the web page being visited. The researchers also recorded the presence of third-party cookies, data stored on a user’s computer that can facilitate tracking across multiple websites.”

“Findings of this study suggest that 99.1% of US based abortion clinic web pages include third-party tracking, transferring user data to a median of 9 unique entities…” the research letter stated, adding:

A limitation of this study was that the National Abortion Federation clinic list included inaccessible URLs. However, these websites are unlikely to differ systematically in their tracking. After the Dobbs decision, some clinics may have closed and taken down their websites. Across all web pages, we identified data transfers to 290 unique third-party domains owned by 66 unique parent entities. 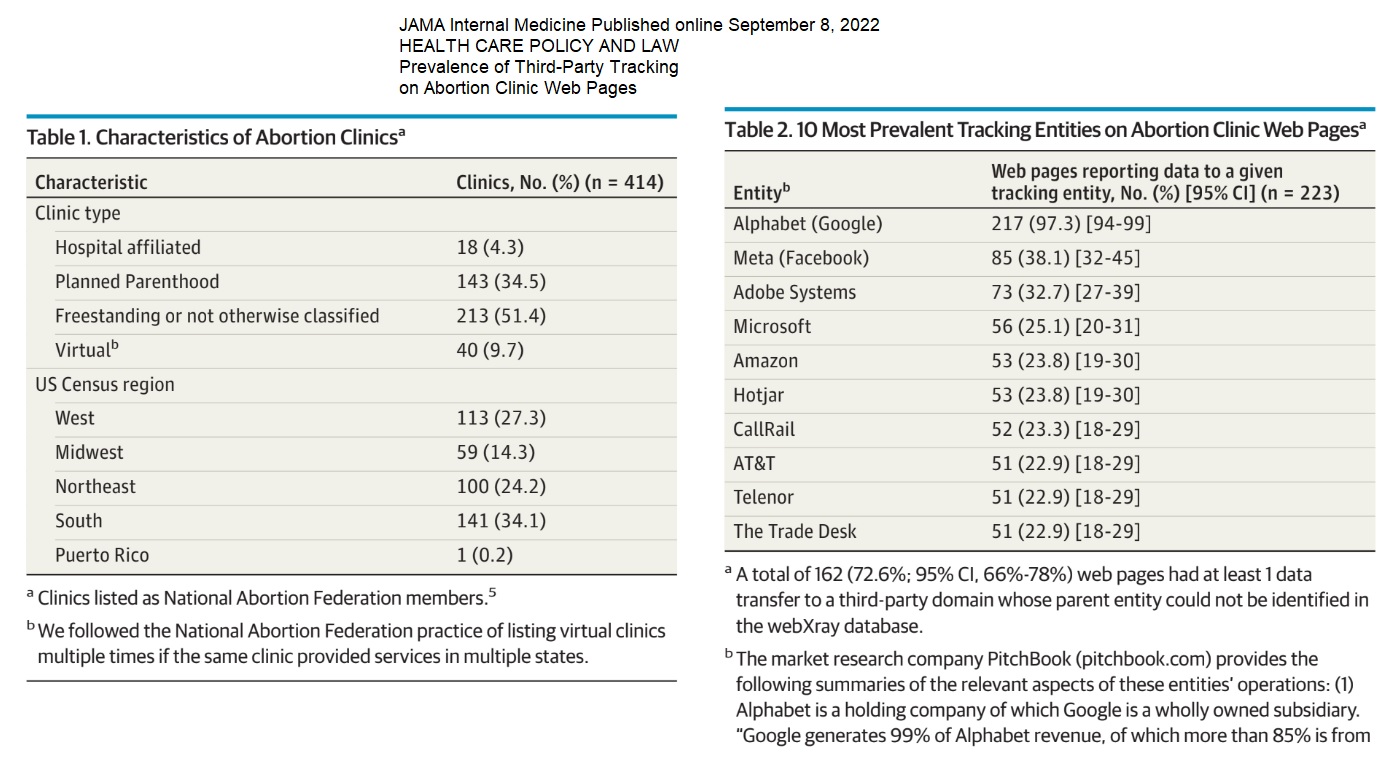 “There are 66 unique parent companies tracking on abortion clinic sites,” Friedman stated in a recent interview. “The most interesting and potentially troubling finding in our study is that 73% of web pages have at least one tracker whose parent company we just couldn’t identify.”

Despite the panic regarding protecting abortion client data, Matthew McCoy, Senior Fellows of the Leonard Davis Institute, and a co-author of the research pointed out that “Planned Parenthood says it is aware of the problem and is taking action to remove trackers, according to a June 30 story in the Washington Post. But when we spot checked a few Planned Parenthood sites, they still had a lot of tracking.”

The move to suddenly protect abortion client data follows a decision by the U.S. Supreme Court to overturn Roe v. Wade. This enabled states to decide how lenient or strict their state abortion laws would be. As a result, several states have returned protection to most preborn babies. But, as no state pro-life law targets the woman receiving the abortion, the push to now remove all data tracking does little to protect women; instead, it will actually work to shield abortion workers from potential prosecution.

After all, website tracking has been happening for years.

“We’ve been doing digital privacy research for two and a half years. Everywhere we look on the internet, we find that website tracking of visitors is ubiquitous. And that’s true even on health-related web pages,” Friedman stated in a recent interview.

“We’ve known since 2015, when the co-founder of our Penn-CMU institute, Tim Libert, who now works in the industry, did a study that showed tracking on health-related webpages is quite common. At the time, it was 91%,” Friedman also claimed. “Then, Joshua Niforatos of Johns Hopkins and others looked at the top 50 hospitals and showed how widespread web tracking is in that domain,” he added.

Therefore, the timing of this move to protect abortion patient data indicates that the sudden panic may be more about protecting abortion providers from possible prosecution than anything else.

According to the Markup, “Facebook takes in data from crisis pregnancy centers through a tracking tool called the Meta Pixel that works whether or not a person is logged in to their Facebook account… Crisis pregnancy centers and other businesses can choose whether to install pixel on their websites, though many website builders and third-party services automatically embed trackers.”

Politico recently wrote, “Google pledged July 1 that it would automatically delete locations such as abortion clinics and fertility centers from the data it collects on people’s movements, following pressure from abortion-rights supporters in Congress. But privacy advocates say this policy doesn’t necessarily protect people seeking abortions — and they have called on the Federal Trade Commission to investigate both Google and Apple for creating an “intense system of surveillance” that threatens the privacy of people providing or seeking abortions.”

While the media is pushing for menstruation tracker apps to remove identifiable information, they ignore the abortion industry’s years of reckless handling of clients’ privacy information.

Below are a few examples from Live Action News: