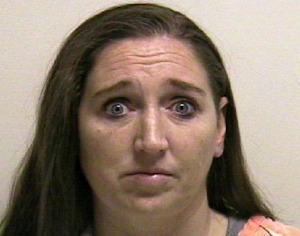 39-year-old Megan Huntsman from Utah was arrested after police found the remains of 7 dead babies in her former garage. Huntsman released a statement to police on Monday in which she admitted to giving birth to at least seven babies in her home between the years of 1996 and 2006. In the statement, she admitted to wrapping each baby in a shirt or a towel and placing them in a plastic bag.

Darren West, Huntsman’s ex-husband called the police after discovering the body of a baby while cleaning out his former wife’s garage. After the police searched the house, they found the rest of the children. Her ex-husband is believed to be the father of all of the children. Police say West had no knowledge of the situation. When Capt. Micheal Roberts of Pleasant Grove, Utah Police Department was asked how the father could have no knowledge of the situation he said, “That’s the million-dollar question. Amazing.”

Capt. Roberts and all the officers were shocked by the situation. Roberts said they were more and more shocked with each box they opened. Darren West’s family released a statement saying they were in a “state of shock and confusion.” The neighbors in Huntsman’s Salt Lake city neighborhood were shocked and perplexed.

This story is just tragic. I can understand why everyone from the police to Huntsman’s neighbors are in a state of shock. Most of us believe that mothers will do anything to protect and care for their children. When crimes like this happen it reminds us that we live in a troubled world full of broken and unstable people.

As a pro-lifer, stories like these are most perplexing. Seven baby bodies are found in a garage, and every major news station reports on it. People are blown away by the news and shake their heads, wondering how such a thing could ever happen. I, too, shake my head at the horror of it all. Yet I’m not naive enough to think this kind of murder isn’t happening every single day in our country. It really makes you wonder, are people totally unaware of what’s happening in abortion clinics across our country?

The bodies that were found in Huntsman’s garage are no different than the bodies found in Kermit Gosnell’s abortion clinic. These babies’ bodies are just like the bodies that are terminated in late term abortion clinics. Live Action did an undercover video in which late term abortion doctor LeRoy Carhart said he will do abortions all the way up to 28 weeks. Do you honestly think the body of a 28 week old baby looks any different than the bodies police discovered?

We must face reality in America. We all know that if Megan Huntsman went to LeRoy Carhart or any other late term doctor to abort her baby (for any reason) she wouldn’t be in the news today. She would just be another woman making a legal “choice.”

Instead, Megan destroyed her children on her own, and the world will from this point forth call her a murderer. She has committed murder ,and I hope she is able to get the help that she needs. I also hope cases like this will cause us to question our double standards.

If it’s wrong to suffocate a baby after birth, how can it be okay to tear one to pieces before she’s born? How can we as a nation demand justice for children after birth but not before? We are fooling ourselves. Megan Huntsman has apparently committed a terrible act. Unlike her neighbors, family, and the police, I am not shocked. I’m all too familiar with the taking of innocent lives.

It has happened legally every day in America for over 40 years.