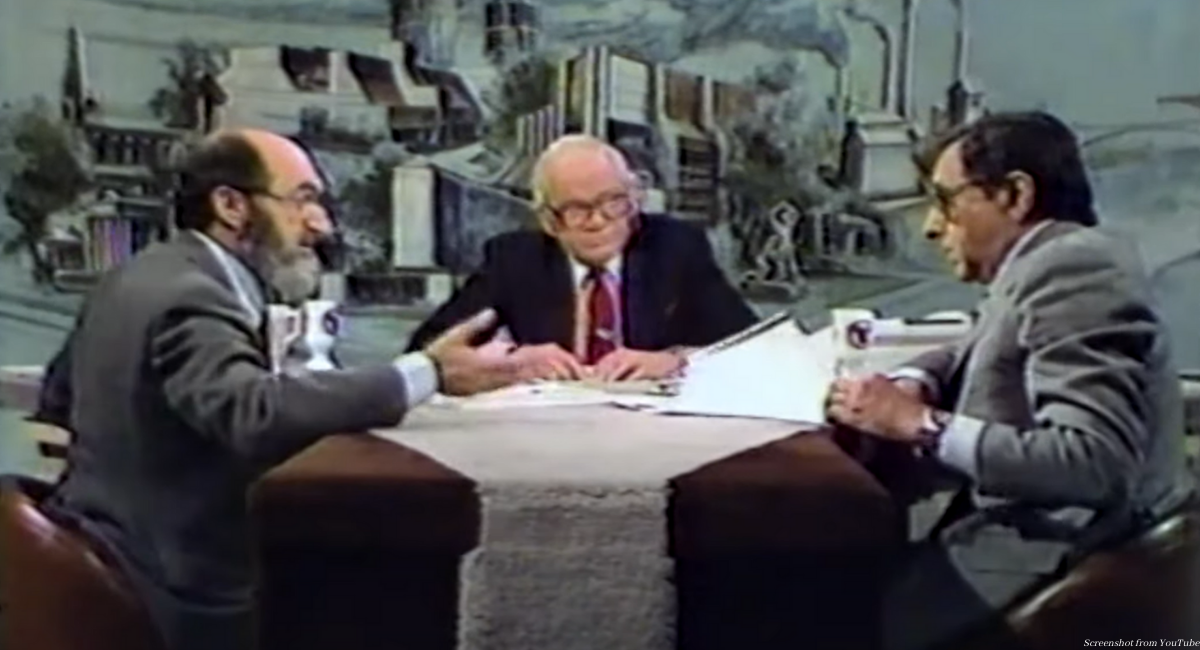 (Campaign Life Coalition) It was a mild Canadian winter day in January of 1983. Michael Jackson’s Thriller was about to set a record for being a top billboard hit for 37 weeks in a row. The super-popular TV show M*A*S*H was about to run its final episode, which, with 105 million viewers, would become the most-watched television event of the era. The country’s federal government had just officially adopted the metric system of weights and measurements. Pay television was about to debut across the provinces.

One free television program that many people in the Ontario city of Hamilton and beyond tuned into on January 21, 39 years ago to the day, saw legendary Canadian TV and radio broadcaster Tom Cherington interviewing two well-dressed men. These were not ordinary men. Both were doctors. And, they were not ordinary doctors. In fact, both had done more than any others in their field to advance abortion across North America, both in Canada and in the United States.

Both of the doctors that day on the Cherington show were each responsible for the demise of thousands of preborn children through abortion. One doctor still championed abortion and would go on to work tirelessly for its expansion. The other, however, had recently undergone a radical change of heart on the matter. Not only did he deeply regret his former abortion activism, but he now championed a complete moratorium on abortion.

These two doctors, an abortionist and an ex-abortionist, were about to go head-to-head on live television. Their complete hour-long epic showdown has not been published anywhere online until today. We at Campaign Life Coalition, Canada’s political arm of the pro-life and pro-family movement, unearthed a copy of the interview from our archives and uploaded it to YouTube.

READ: Former abortion supporters describe how their minds were changed

“We have a fair sampling,” Cherington, wearing a pink shirt and red tie underneath a black pin-striped suit-jacket, began the segment in his deep, powerful voice. “For those of you who haven’t got on [the show with your phone call], stay on the line. We’ll be back with our two guests and the discussion will begin on the abortion clinic set-up and the whole question of abortion.”

Cherington’s special guests on his CHCH-TV program were none other than abortionist Henry Morgentaler, sometimes referred to as “Canada’s Father of Abortion,” and Dr. Bernard Nathanson, a former U.S. abortionist who had previously earned the title of “The Abortion King” for his highly successful abortion activism in the medical and political arena.

At this time in 1983, Morgentaler had already been running a successful, but illegal, abortion centre in Montreal for about a decade and a half. In 1969, the Liberal government, led by Prime Minister Pierre Trudeau, amended the Criminal Code, in which it was a crime to induce an abortion, to henceforth allow doctors to commit abortions in accredited hospitals. The new law required that for an abortion to proceed, a Therapeutic Abortion Committee of three doctors must first determine that the preborn baby threatened the mother’s life or her health, a term that was broadly interpreted. Abortion remained illegal in all other circumstances, including in Morgentaler’s private abortion mill.

In 1973, Morgentaler boasted of flaunting the law by having aborted some 5,000 preborn babies outside of the hospital setting. His run-ins with the law, which included jail time, would eventually culminate in a 1988 Supreme Court hearing, where the court would strike down the 1969 abortion law as “unconstitutional.” According to the judges in that 1988 ruling, the law’s criteria for abortion infringed upon a woman’s right to “life, liberty and security of person.” The court at that time did not establish a “right” to abortion. In fact, the court left the “abortion question” to Parliament to, in the words of the ruling, “pronounce on and to direct social policy.”

To this day in Canada, abortion still persists in a legal vacuum, leaving the preborn with no legal protection. Abortion is permitted throughout all nine months of pregnancy, for any reason or no reason whatsoever, up to the moment of birth. Morgentaler was awarded the Order of Canada in 2008 for his work in securing legal abortion on-demand for Canadian women. He died in 2013 at the age of 90, bearing much responsibility for some 100,000 induced abortions committed annually in Canada….

Editor’s Note: This article was originally published at Campaign Life Coalition and is reprinted here with permission.