Rep. Nancy Pelosi (D-Calif.) has been written about in Live Action News quite a few 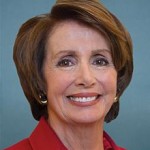 times. When asked about the difference between what Gosnell did and abortions taking place moments before birth, Pelosi refused to answer the question and instead referred to abortion as “sacred ground.”

Also, notice how the question, asked by The Weekly Standard, does not mention Catholicism or politics. Pelosi, however, does:

Asked what the moral difference is between what Dr. Kermit Gosnell did to babies born alive and aborting those same infants moments before birth, Pelosi refused to answer.

“As a practicing and respectful Catholic, this is sacred ground to me when we talk about this,” Pelosi said. “I don’t think it should have anything to do with politics.”

Rep. Pelosi claims to be “a practicing and respectful Catholic.” By mentioning her faith when the question does not, the congresswoman not only seriously confuses the teachings of her Catholic faith, but makes it look as if she has something to justify. Either that, or she’s chosen her politics over her faith. It is curious, then, that Pelosi mentions that she “[doesn’t] think it should have anything to do with politics,” when she herself advocates for abortion from a position of political power.

When Father Frank Pavone of Priests for Life challenged Nancy Pelosi to drop either her Catholic faith or her pro-abortion stance, she completely dismissed him.

One cannot claim to espouse Jesus Christ as Lord and Savior while believing that he would support abortion. I have written about this before, as well as mentioned Catholicism and abortion. Of all the Christian denominations, the Catholic Church takes perhaps the most consistent pro-life stance.

As a practicing Catholic myself, I cannot help but wonder sometimes: where is this consistency?

You may have heard Cardinal Burke, who is on the high court of the Vatican, call for Nancy Pelosi not to receive Communion. This is good news, but there’s more to it than that. This call came during an interview; it was not an actual judicial act. It’s encouraging to see the matter being mentioned, but how it will really be dealt with remains to be seen.

The National Catholic Register is a helpful source in explaining what is really going on lest there be any confusion. The article does conclude on an encouraging note:

8) Many Catholics are outraged by the way politicians like Ms. Pelosi flout Catholic teaching on life issues such as abortion. Did the interview touch on this matter?

Q. Many faithful Catholics are troubled when high-profile political figures with unconcealed antilife, anti-family positions are honored in such ways as receiving invitations to speak at Catholic university commencement ceremonies and given honorary degrees or memorialized at public Catholic funeral Masses without having renounced their immoral positions. Faithful Catholics, at the same time, are taught they have committed a serious sin if they vote for these same candidates. How are those who are seriously trying to live out their faith to reconcile this apparent contradiction?

A. You cannot reconcile it — it is a contradiction, it is wrong, it is a scandal, and it must stop! We live in a culture with a false sense of dialogue — which has also crept into the Church — where we pretend to dialogue about open and egregious violations of the moral law. Can we believe it is permissible to recognize publicly people who support open and egregious violations, and then act surprised if someone is scandalized by it? For Catholic institutions or individuals to give recognition to such persons, to honor them in any way, is a source of grave scandal for which they are responsible. In a certain way, they contribute to the sinfulness of the individuals involved. There is no way to reconcile it; it simply is wrong.

Make no mistake: the Catholic Church is pro-life. Cardinal Burke makes some rousing comments in the excerpt provided above. If this contradiction truly is irreconcilable, then we need consistent spiritual discipline on the matter. At least this Catholic is hoping for a better, more consistent answer as to what the Church really plans to do to keep up with its unwavering dedication to life.