“There’s been too much censorship of this story already. We’re going to change all that. With your help, we’re going to make a TV film about Kermit Gosnell. We’ll do the job the mainstream media and Hollywood won’t do.” 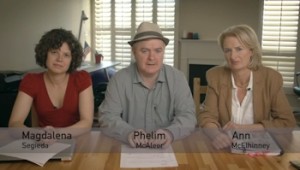 A film team in Ireland is working to fund a game-changing TV movie project intended to expose Kermit Gosnell as the serial killer he is. The team was frustrated by the lack of media coverage given to Gosnell’s crimes during his trial, especially when contrasted with the Jodi Arias trial, which was virtually inescapable for any American who owned a TV, surfed the Internet, or participated in social media at  the time.

So they decided that “if the media won’t report the news, we can do it ourselves.” And the plan for Gosnell was born.

Supporters, including Kevin Sorbo and his wife, have pointed out that, with America’s obsession and fascination with serial killers (evidenced by the plethora of TV shows and movies on the subject, including Dexter, Criminal Minds, CSI, Law and Order, etc.), there is no justifiable reason why the Kermit Gosnell story was glossed over by the media. The Irish film team posits that it was the victims’ socioeconomic status (Gosnell’s patients were primarily minorities who were living in poverty), and the media’s worship of abortion rights, that explain Hollywood’s silence on Gosnell.

The team is utilizing crowdfunding technology to raise the $2.1 million needed to produce the film. After being rejected by Kickstarter due to its truth-telling content about the brutal killing acts of Kermit Gosnell, the team turned to Indiegogo, where it has successfully raised nearly $1.4 million towards its goal. Mere weeks remain, however, to raise the remaining $800,000 needed. The movie is a fixed funding  project, meaning that contributions will be refunded to the donors if the project fails to reach its $2.1-million goal by May 12.

In addition to spreading the word about Kermit Gosnell, whose name remains virtually unknown outside the pro-life community and those who happened to be viewing when Fox News aired its feature on him, the Gosnell movie will also send a message to the mainstream, liberal media who have to this point monopolized the news content that Americans have access to.