Sophocles once wrote that “children are the anchors that hold a mother to life.” A look at the national tragedy of abortion illustrates that in our modern world, it’s mothers who too often uproot that anchor and sentence their own children to death. When mothers extinguish the potential, the joy, and yes, the sorrow, but most of all, the life, of a new human being they were meant to grow and guard and cherish, a piece of their own life is lost as well.

Society tells women to throw off the bonds of motherhood, forgetting that we women are inducted into motherhood not at birth, but at the first moment of their little one’s prenatal existence. Once that life has been created, he can be snuffed out, but he can never be forgotten. Even science informs and awes us with the reality that a small remainder of each child’s cells live within the body of his mother. These cells work incredible things in the mother — whether the baby was born, miscarried, or aborted. Scientific research shows that the baby’s cells repair his mother’s tissue, prevent cancer, and perhaps event block the ravages of Alzheimer’s.

To be a mother is to embrace a gift.

Sometimes, the gift is planned, expected, and awaited with joy. Other times, the gift comes through panic, pain, and despair. But there is hardly a mother on earth who will tell you her child was not worth the price she paid.

Contemplating the gift of life requires us to consider its alternative. Abortion, of course, is the alternative women choose in the place of life. So many have constructed an ivory tower for this word — “abortion” — and modern feminists have all too often attached the power and equality they seek to this term. But what is “abortion,” for a mother?

If words are anything, they are full of meaning, and that meaning deserve to be explored, to be confronted. Who better to explain “abortion” than a doctor who performed them? Dr. Anthony Levatino explains the four most common abortion procedures in the U.S. in the videos here. A D&E abortion — the most common second trimester abortion — is detailed below, and it’s not what a mother hopes and imagines for any child of hers:

As a mother myself, the reality of abortion confronted me head-on when I was pregnant with my son. I wrote his story, “The birth defect that never was” three years ago. Early on in my pregnancy with my son, I talked to another mother who was contemplating abortion for her own son. In the end, she chose against life, and Robbie — who would have been only weeks older than my son — was aborted. (Robbie’s full story is here.)

As a mother, I’m confronted with the fact that my son is alive and hers is not.

Later on in my pregnancy with my son, the Kermit Gosnell trial happened. I will spare you the image, but in the grand jury documents, there was a photo of a baby boy whose neck had been sliced and slashed by the abortionist Gosnell just before he died.

And again, I was confronted with the fact that my little boy was still growing and kicking inside of me, but at nearly the same age, this mother’s son was literally slaughtered.

Yes, Robbie’s mother and the mother who went to Kermit Gosnell, they did choose abortion. But did they really, really know what they were choosing? Did they understand not just what life is and how beautiful and precious every new human being is at every stage of life, but what the opposite of life is? Did they get to see how violent and cruel and inhumane every abortion is, no matter the stage of pregnancy? Did they come to terms with exactly what their “choice” subjected their sons to?

As a mother, I am convinced that all of us mothers need to tell our fellow women what abortion really is. We need to be so persistent that we drown out the voices screaming and insisting that abortion is our “right” as women. Hiring a doctor to do this to our sons and our daughters is a tragedy, not a right. Women’s empowerment is the last thing abortion leads to. It devastates and crushes our identity as mothers. And no, we are not only mothers; but yet, we are still mothers. No other woman, no industry, and no society ought to strip that part of us away or tell us that we have to stomp it down. 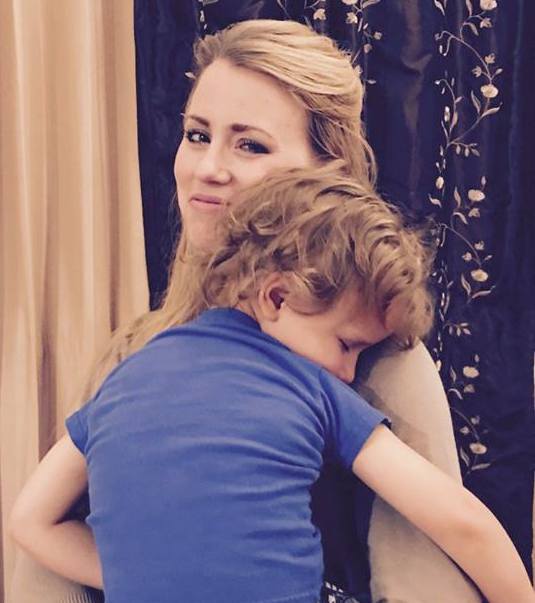 Me and my son

If you, too, are a mother, will you join with me in making sure that our sisters know what they’re choosing when they say they want an abortion? Will you help women know that other options and support abound? Will you stand beside them and show them what it means to be a mother? If you have already had an abortion, will you pursue your own healing and then add your voice with the women who are telling our nation and the world what abortion does to women, too?

You can start by quickly contacting your Senator and telling them to defund Planned Parenthood — our nation’s largest abortion chain that constantly preys on and lies to women while peddling abortion as their only answer. You can start by sharing the Abortion Procedure videos, through email or social media, or maybe on a bigger screen. You can start by telling your own mother story.

Together, as mothers — whether our children are alive or dead — we can change the world and end abortion. If you grieve over a child you lost through abortion, know that you are the perfect woman to prevent another mother from making the same mistake. You are needed…please raise your voice.