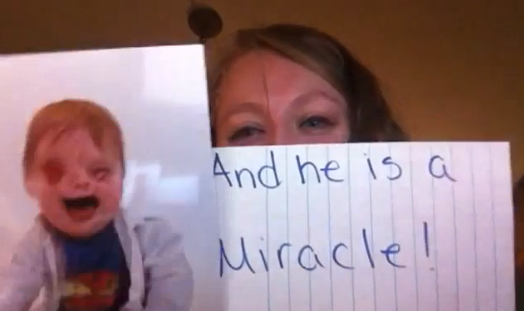 Children and adults with disabilities never cease to amaze the world with their impressive resilience and uncrushable spirits. But there are always a few bitter individuals lying in wait, ready to trample the happiness that these people with special needs experience and bring out in others.

Just last week, pro-life Congresswoman Herrera and her unborn child with Potter’s Syndrome were the target of disgusting comments from individuals who do not believe that her baby deserves life or love. Similarly, Bill Maher recently called Trig Palin “retarded” (a comment which gleaned approval from members of The View cast).

In the face of similar comments, one mother of a baby boy with special needs created a video to respond to criticism that she has received since his birth. Individuals have accused her of being a bad mother for taking him out in public, and even criticize her for not aborting him. Sadly, even many doctors recommend aborting children with prenatal diagnoses of chromosomal and other abnormalities.

However, in an ironic and heartening twist to the story, baby Christian’s bubbly personality is so irresistible that, as his mother makes clear, it is almost impossible not to love him after just a few minutes of getting to know him.

As Christian’s mother recounts, about halfway through her pregnancy, her baby was diagnosed with fetal abnormalities. Christian’s parents were crushed, but they loved him regardless of what his special needs would be. It was not even clear during the pregnancy whether Christian would survive after birth.

Yet Christian’s mom braved the odds and gave birth to her baby boy, who was very much alive. His condition was worse than doctors had known it would be before his birth. Christian was born without eyes, and he had a cleft palate. He was hospitalized for four weeks, but he survived and got to go home with his family at the end of his birth journey. Since that time, despite bumps in the road, Christian and his family have grown stronger and closer, and they become an example to everyone they encounter.

This inspiring video and courageous mother are proof that a less-than-perfect prenatal diagnosis is not the end of the world.

In fact, they demonstrate that sometimes, against all expectations, these specially designed children become the most beautiful members of the families and societies in which they live.