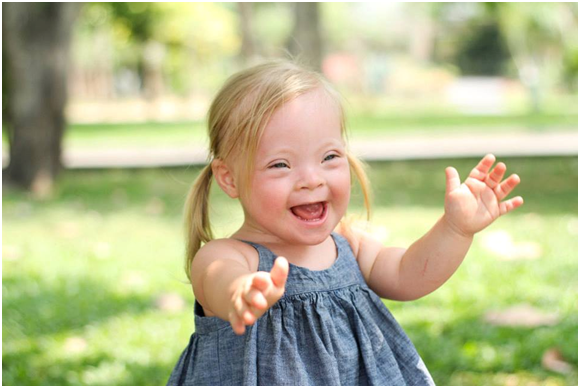 “It makes me sick to think what beautiful moments I would have missed these past two years if I had taken a different path from staying with my daughter.”

Jack Barr, Jr. and his wife, Jana, have pondered that question and are seeking to raise the truth about the joy they have experienced from their two-year-old daughter, Marley, who has Down syndrome.

It didn’t start out that way for Jack, however. Jack and Jana found out that Marley had Down syndrome after she was born. For babies pre-diagnosed with Down syndrome, only eight percent are born.

“I told my wife I did not want her,” Jack said. “I became deeply depressed with thoughts of suicide and divorce for the entire first year of fatherhood.” For Jack, the healing process has been a journey – one that prompted him to make the video.

Marley changed Jack’s life forever with one simple act. “[She] leaned over and gave me a kiss suddenly without any warning,” Jack recalls. “At that moment, I knew my daughter needed a father and not another doubter.”

As Jack rocked Marley to sleep one night, he thought about the fear and doubt that had overtaken him. “I never would have experienced this life-changing transformation if Marley had not been born.” However, for unborn babies diagnosed with Down syndrome, there is a ninety-percent chance that child will be aborted. “This made me realize that these unborn children need a voice,” Jack said. “They at least need a chance to plead their case to their mother. The reality is that in our country, a mother will make the final decision if that baby lives or dies.” And as soon as Marley fell asleep, “I started writing the conversation that I thought an unborn baby would have with his or her mother the day she receives the news.” And If They Had a Voice was born.

The main goal for If They Had a Voice is “to encourage mothers to think through their initial fears and gather as much information as possible before deciding the fate of their child with Down syndrome.” Jack has said, “My belief is if we can encourage expecting mothers to communicate with families with Down-syndrome children, then we can start taking steps toward saving lives. We hope our videos and stories will give a voice to the children who are aborted every day with Down syndrome.”

Jack and his wife have advice for mothers who find out they are carrying children with Down syndrome. “Talk to the people who have been there. These families are willing to talk to you and give you the bad and the good. They will encourage you and share with you their struggles. Forget about talking to the doctors and talk to the families. Every family I have talked with told me that having a child with Down syndrome had opened their eyes to a love they would have never experienced without that child.”

From the time If They Had a Voice was started, Marley’s story has impacted many lives. Jack has learned that “when you are open and honest about your struggles and victories, then people will listen.” One of Jack’s and Jana’s close friends who worked with them in Thailand changed her career path so she could work with children with special needs in the U.S. and, one day, “start a program or school in other countries where there are no available opportunities for students with special needs. God has used the precious life of our miracle Marley to change my heart and give me a new vision and passion for my students.”

If They Had a Voice is here today because of the journey that Jack and Jana were able to experience with their daughter Marley. They want to give others the same chance to go on the journey that has made them who they are today. “Mothers are afraid of children with Down syndrome because that is what we teach them in schools, media, and the medical community. Every situation is different, but the outcome is the same. These children deserve a chance and a voice. Someone has to give them a voice and my hope is that If They Had a Voice will save lives if we reach the mothers.”

Jack had believed the same lie that most expectant mothers are told in the doctor’s office or at a family gathering when they are pregnant with a baby who has extra chromosomes – abortion is the best choice for the baby and for your family. Jack has found the opposite true:

Now, two years later, she is the joy of my life. She is not a monster, she is not ugly, she is not retarded, and she is not a burden on our family. She is a beautiful little girl who brings joy to our daily lives. I understand the fear of having a child that is different, so I want to encourage you to consider taking the road less traveled and see the beautiful things a child with Down syndrome can show you.

Jack is looking to raise awareness about this topic:

Right now, a mother has been asked to make a choice. She must decide to either keep or abort a child that is different from her original plan. This baby will always be different, and there is nothing she can do to change that fact. What has the doctor told her about this unborn child? Did the doctor tell her the TRUTH, or did the doctor only tell her about unavoidable heartache of raising a child with Down syndrome? Will she choose to take a different path or listen to the media that says a Down syndrome child is already broken at birth? The hardest day of her life has suddenly been filled with everyone telling her that aborting this child would be best for her family.

Every mother must make a choice, and I respect that difficult process. BUT I want every expectant mother to hear both sides of the story. Raising any child is difficult. BUT I can promise you that it makes me sick to think what beautiful moments I would have missed these past two years if I had taken a different path from staying with my daughter.

Nine out of ten babies diagnosed with Down syndrome are not given the same opportunities you and I have. They are aborted. But what if they had a voice? As Jack says, “children with Down syndrome can change this world in ways we cannot.”

Editor’s Note: This is follow-up to a June 7 article at Live Action News.