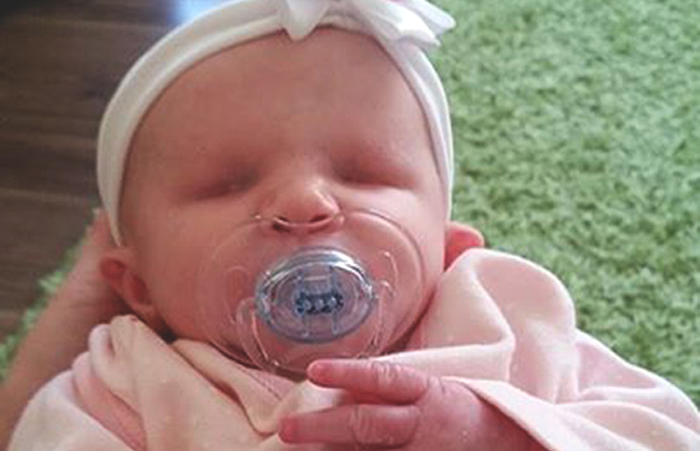 When a brain cyst showed up on the routine, 21-week ultrasound of Danielle Davis’ baby-in-the-womb, the mother-to-be said, “We were worried about it.”

Doctors advised Danielle, 24, and her husband, Andrew Smith, 31, to abort the baby, because a brain cyst meant a probable disability.

For Danielle, it was an agonizing decision to make. “It was shocking news, as we weren’t expecting that,” Danielle explained. “We took two days before telling the doctors that we didn’t want a termination.”

Doctors continued to monitor the baby’s cyst throughout Danielle’s pregnancy.  Finally, after waiting 18 more weeks, Danielle was induced at 39 weeks.

While many times children with dire diagnoses in pregnancy turn out to be perfectly healthy, this time little Daisy did indeed have a birth defect.

“Anophthalmia,” a Greek term meaning “without eyes,” is the name for an incurable disability in which the child’s eyes fail to form in the womb, leaving the eye sockets empty.

“It was a shock,” Danielle said.  “We had never heard of the condition before, and neither had any of our friends or family.  People didn’t really know what to say when we told them.”

“But she is our gorgeous baby, and we have no regrets about turning down a termination,” the courageous mother declared.

The pro-life movement has always affirmed that a child – or any human being – could be disabled, precious, and even “gorgeous.”

“If disability is a reason to devalue children before birth, what cruel message does this send to persons with disabilities who are already born? Would you say to someone in a wheelchair that s/he should never have been born?” the group Feminists for Life asks. “People who overcome adversities challenge and enrich our world.  Sadly, persons with disabilities are often devalued, as women once were.”

Now eight weeks old and at home in Cwmbran, South Wales, beautiful Daisy acts “like any other baby” with her brothers, six-year-old Logan and four-year-old Tyler.

“We want to give Daisy as normal a life as possible and give her the same opportunities as other children,” Danielle and Andrew said.

Later this month, Daisy will be fitted for glass eyes, to open up her eye cavities, so as to ensure that the bone and soft tissue around the eye socket grows properly.  These will be replaced when she is about a year and a half old with more permanent, natural-looking eyes.

They also want to raise awareness of anophthalmia. The condition, which develops in the womb, may be caused by genetic mutations and abnormal chromosomes.  Babies with anophthalmia may be born with one or both eyes missing.

Researchers theorize that environmental factors, such as exposure to X-rays, chemicals, drugs, pesticides, toxins, radiation, or viruses, increase the risk of anophthalmia.

Danielle and Andrew are now planning a 12,000-foot skydive to raise awareness of anophthalmia, and to raise funds for the Royal National Institute of Blind People charity. They hope to raise £2,500 (approximately $3,700 U.S.).

Danielle explained, “I hope that by raising awareness, other parents won’t experience the same shock that we did, because they will know the condition it exists.”

This amazing couple, whose unconditional love overcame their baby’s disability to give life, face the need for even more prayer. Last week, a test revealed that little Daisy is partially deaf, and she will be fitted with hearing aids soon.

Editor’s Note: This article originally appeared on LifeSite News on April 13, 2015, and is reprinted here with permission.