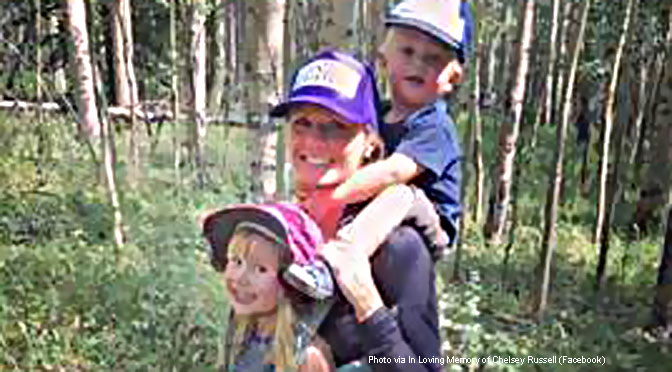 Last week, a Colorado mother of two died after jumping off a boat to save her son from drowning.

Chelsey Russell, a 35-year-old attorney, was vacationing on Lake Powell with her mother, brother, and two young children. As the houseboat neared Hall’s Crossing, Russell’s 2-year-old son fell overboard into the water. Russell immediately jumped in after her son, reaching him before he slipped below the surface. She propped him up on her chest, keeping him safe while family members attempted to stop the moving houseboat and come to their aid. Neither Russell nor the boy were wearing life jackets.

By the time Russell’s brother was able to reach them via a small motorboat, the boy was still safely being kept above the water, but Russell was unconscious. CPR was attempted for over 30 minutes, but to no avail. Russell was pronounced dead.

“She was still, for whatever reason, able to keep the baby on her chest, whether conscious or unconscious,” said San Juan County Sheriff Rick Eldredge.

Russell’s death was at first assumed by the authorities to have been caused by drowning. But family members have since explained that Russell suffered from a rare heart condition, and had struggled with heart disease since she was a young child. The Washington Post reports that Russell was an active volunteer at the American Heart Association of Denver, and a founding member of Young Hearts, a group for young people with heart disease.

“She was a lovely lady who embraced who she was and the challenges she had,” said Sheila Kemper Dietrich, former executive director at the AHA of Denver.

Indeed, Russell did embrace the challenges she had, running marathons, snowboarding, biking, and otherwise exhibiting extraordinary athleticism despite her heart condition.

In addition to being a loving mother and accomplished athlete, Russell was a uniquely gifted attorney, according to her colleagues. Via a statement from her law firm, Russell’s colleagues expressed their sadness at her tragic passing, “Chelsey was an amazing mother, an exceptional legal talent, and extraordinary athlete, a loyal and generous friend, and left us all better for knowing her. She is sorely missed.”

Amy Seneshen, a partner at Russell’s law firm, continued, “She was a better mom than any other mom I’ve ever known. She would have done anything for her kids.”