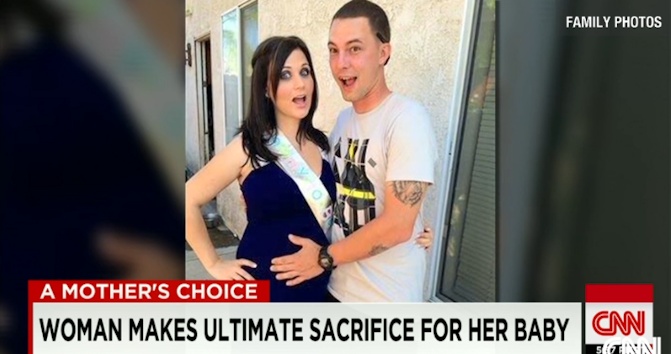 CNN released a video interview with an unbelievably courageous mom, Ashley Caughey. Ashley’s bravery in the face of suffering is simply awe-inspiring.

In 2012, Ashley was enjoying life with her boyfriend Jonathan and their son Braiden. That spring, an aching knee became increasingly more painful. After a few trips to the doctor, Ashley realized that something was wrong. A doctor misinformed her that the pain was likely arthritis. A year later, Ashley had increased trouble walking and decided to see a specialist.

An X-ray revealed the news Ashley dreaded to hear. A doctor told her she had a bone cancer known as osteosarcoma. During this same time, Ashley found out she was 10 weeks pregnant. The doctors wanted her to began chemotherapy as soon as possible, but Ashley knew that that would harm her child.

They told me what would likely happen to Paisley, that you know, she most likely wouldn’t make it and I just knew. It wasn’t a choice to me. It was like this is what needs to be done. She’s first. I’m not going to kill a healthy baby because I’m sick. There’s nothing wrong with her. Her life is just as important as mine if not more important. I mean as a mother my job is to protect my kids.

Ashley made a selfless choice to delay treatment until her after her child was born. In the summer of 2014, Ashley gave birth to a beautiful girl named Paisley. This past November, in a special ceremony, Ashley and Jonathan were married. It was a ceremony that Ashley described as “magical.” Her son Braiden was the one she chose to walk her down the aisle.

Tragically, since the birth of Paisley, the cancer has spread. Doctors have given Ashley a diagnosis of mere months to live. The cancer has spread throughout her body and into her brain. Yet in the midst of her great pain, Ashley still has hope. She told CNN:

In times of trials, we all need friends who will stand by our side, no matter the circumstances. Lindsey Natzic-Villatoro is a true friend to Ashley. Lindsey is the owner of Love Song Events and Photography. This talented photographer has taken the most beautiful photos of Ashley and her family. On her Facebook page, you can see Ashley’s weddings and family shoots. Lindsey planned Ashley’s wedding and has been a major support to her. Even now, through social media, Lindsey keeps the world updated as to Ashley’s condition.

Lindsey, with the help of supporters, was able to make three wishes come true for Ashley. One of those wishes was a trip to the San Diego Chargers training facility for her son Braiden. Ashley said seeing her son’s dream come true was one of the greatest days of her life.

Lindsey told CNN that Ashley expressed the depth of a mom’s love through her selflessness.

It’s very difficult to look at Ashley’s gorgeous family and accept the fact that she may have to leave them one day soon. When CNN asked her what legacy she was leaving behind, Ashley said:

I want my kids to know how much I love them and how much I fought for them.

If I could say anything to Ashley, it would be this:

In a society where we value self-protection over loving another, your story stands out as a shining light. You give me hope. I along with thousands of others pray for your days on this Earth to be filled with grace and strength. Thank you for fighting for your children. Thank you for showing a nation what true bravery looks like. You are an incredible mother.

To give toward Ashley’s recovery and for more updates, please visit her GiveForward page.