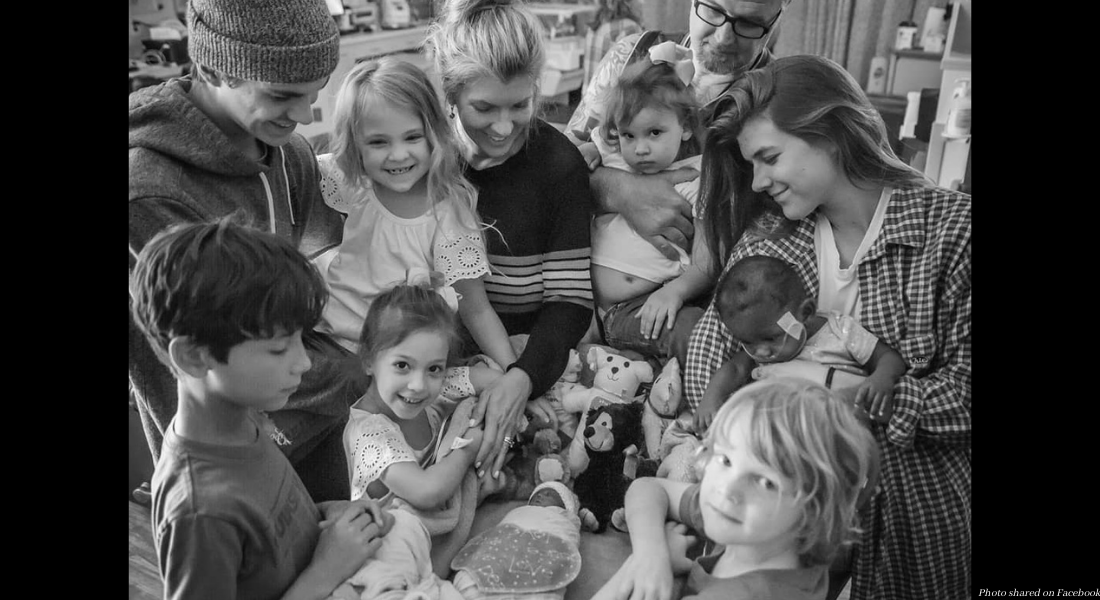 Julie and her husband David started their parenting journey with three biological children before embarking on a journey with foster care and adoption. The couple has adopted six children, many of whom have special needs. But one member of their family in particular was only with them for a short time, though he will forever have a place in their hearts.

The couple had adopted four children before having a failed match. They then were matched with a micro-preemie, born at 25 weeks, and adopted him when he was able to leave the hospital six months later. It didn’t take long for them to be matched with another pregnant mother. “We were working on getting into a new routine with our micro-preemie while anxiously awaiting the arrival of our second baby boy, Cane,” she wrote in an essay shared by Hiptoro. Then Julie got a terrifying message: though the birth mother wasn’t due for another 16 weeks, her water had broken early.

“I could not stop crying thinking about the mama and the baby, praying all would be OK,” she said. “As the next few hours were merely a blur, one thing that was not: the need to get to the mama to love and support her, no matter what was to happen as the medical staff was doing everything they could to stop her from delivering a premature baby.”

When Julie arrived at the hospital, the mother was in labor, and Cane was soon delivered at just 24 weeks and weighing less than two pounds. “I continued to pray over and over that mama and baby would be OK and if any storm would come, we would all make it through,” she said.” Though Julie didn’t want to leave, she eventually had to, with Cane alone in the NICU in his isolette.

“All the while, all I could think was I was a failure. I was not there to protect him. I was not there stalking his isolette to let him know he had a family waiting… this big, crazy family who loves him,” she wrote. “Less than eight hours after getting home, I got a call that I wish upon no one. Many doctors expressed their concerns about the overall prognosis or the possibility he just may not make it through the night.”

Knowing that Cane may not survive for long, Julie and David began preparing for all of them to make a trip as a family to be with him. As difficult as it was to arrange, they were able to make it happen. “The trip was set, but as each day came, so did the daily calls from the doctors and the grim reality that he may not make it through the next hour,” she said. “There came a point where I did not want to answer the phone. I insistently prayed and asked for ‘prayer warriors’ to cover our baby boy. I posted daily on social media asking for help in prayer to the specific needs as the doctors gave their updates. It seemed there was always a time in the day we were told he just not might make the next hour. This prompted my husband to reach out to family who lived near the hospital, asking them to please go and be with our little guy. We did not want him to be alone if things were really going in a downward spiral.”

The other family dropped everything to be with Cane in the hospital until Julie and David could get there, trying to arrive as soon as possible. When they finally arrived and were checked into the hotel, Julie headed straight to the NICU, only to be met with grim news. “By this time, he did not look like the little boy who I left that previous Sunday,” she said. “Only three days had gone by and he was anemic and not moving. He was so small with so many tubes and wires encumbering his little body.”

Doctors continued to keep them updated, and question them about how aggressive they wanted to be with his treatment. Battling sepsis, Cane would make progress, and then regress. Finally, they decided to try an electroencephalogram (EEG) to measure his brain activity.

“I had to excuse myself while the technician finished placing all the leads, because there was a part of me that did not want to know anything,” she recalled. “I returned about an hour into the test, seeing the screen, lines going across… I just cried. I cried uncontrollably.” Thanks to her experience with her children’s special needs, she had seen EEGs before, and she knew the results meant he had no brain activity left. “I know there is a reason for everything, but why bring precious baby Cane into the world only to take him out eight days later?” she asked. “I was sad, mad, and most of all, I felt as if I was letting his first mama down — a feeling I wish upon no one.”

Eventually, all of Cane’s tubes and wires were removed, and the family was free to spend his remaining hours alive holding him and showing him their love. He lived just eight days after birth, but he is still a much-loved member of their family.

“Eight days is never enough to have with anyone in comparison to a lifetime, but I know we will cherish every moment we were given,” she said. “As his passing came and the doctor gave the official declaration, our little guy has his tiny footprints forever stamped on my heart. I was asked this past week how I could love someone so much I did not give birth to and my answer was, how could you not? He needed us and we needed him, and that is the definition of family.”