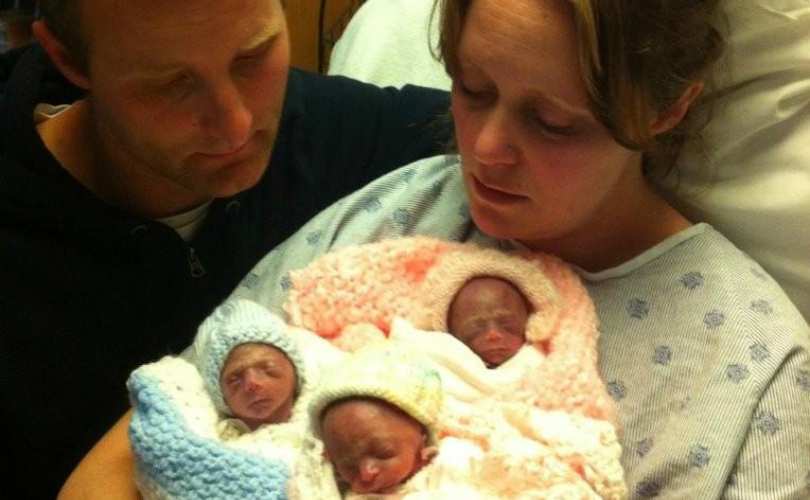 The doctor performing the ultrasound had a strange look on his face. The newly married couple braced themselves for what they were sure would be terrible news.

Jason and Marie Taylor, both in their 30s, had married only four months ago, in May 2012. They were eager to start a family from the moment they fell in love.

It was an ongoing joke in the extended family that if Marie was going to “catch up” with the number of children her married sisters had, then she and Jason would have to have twins and triplets.

One month after wedding bells, the couple was delighted to discover that they were pregnant. Now at 11 weeks, they were excited to see their ‘little one’ – or little ones, as it turned out – through the medical magic of ultrasound.

Jason and Marie were ecstatic at the news of triplets. Jason ‘high-fived’ Marie, who was lying on the observation bed.

“We were just really, really excited,” Jason told LifeSiteNews in an exclusive interview from their home last week.

The couple’s next immediate thought was: “Oh my goodness, what are we going to do with so many babies…we only have a limited number of arms.”

The ultrasound revealed that there were two girls and a boy. The proud parents named them Bernadette, Christine, and Adam.

At a subsequent visit, doctors spoke to the parents about “selective reduction,” but the couple would hear none of it. Even though Marie was a trained nurse and knew that doctors would ask this question, it stung her to hear someone so unconcernedly offer to “kill one or two of my children.”

“That was really upsetting to us both since we so eagerly anticipated our children,” said Jason.

The couple began to prepare themselves and their house for the new arrivals, expected in February 2013. Three little cribs were purchased and tenderly placed in the upstairs bedroom.

Every night before falling asleep beside his wife, Jason would lean over and talk to his unborn children. “Hey Adam, hey Bernadette, hey Christina, I’m looking forward to meeting you. I love you guys!” Before leaving for work he would say to them: “Look after your mommy!”

But Marie’s body was beginning to have trouble adapting to the demands of the three thriving lives inside of her. She experienced massive headaches, as well as heart palpitations and chest pains if she overexerted herself. She was troubled with severe acid reflux. One day, while in the midst of writing wedding thank-you cards at the kitchen table, she suddenly blacked-out. When she came to, she managed to phone Jason for help.

Despite Marie’s health struggles, a November 13 ultrasound revealed that Marie and her babies were doing quite well. At 22 weeks, Marie was measuring more like a pregnant woman at 35 weeks.

But the day after the ultrasound, Marie started experiencing “sharp little pains” across her abdomen that became increasingly regular. That evening, the couple decided to head for the hospital to see what was going on.

Arriving at the hospital, the couple was incredulous when doctors told Marie that she was four centimeters dilated and that labour had begun. The young couple clung to the hope that doctors could do something to prevent labour from developing further while still keeping the babies safe.

But labour progressed further. Doctors broke the news that the babies were on their way.

At 22 weeks, the tiny triplets didn’t have much of a chance. Not only was their gestational development delayed because they were triplets, but their little lungs hadn’t developed enough for them to breathe. As a nurse, Marie knew that ventilation efforts on underdeveloped lungs could explode the lungs, causing immediate death. Doctors told the parents that when born, the babies would not benefit from medical intervention.

As Jason stood by his wife’s side, witnessing the unthinkable nightmare that was unfolding before his eyes, he suddenly realized that he had been giving all his attention to Marie. He realized that his unborn children were probably just as frightened by what was happening as he and Marie were. The young father leaned over and chokingly comforted his children with the loving words he had spoken so often. “Hey, I love you guys…I’m looking forward to meeting you…”

The parents prepared to greet their children and spend as much time with them as they could.

The triplets were born in the early hours of November 15, each weighing between 360 to 450 grams, less than a pound each.

“They came out, full of life, and moving around,” said Jason. “I kept on hoping that they might be the only triplets born at 22 weeks to ever survive, but they faded quickly.”

Despite the deep sorrow of having to let their children go, the parents were nonetheless taken aback by how perfectly formed their little children were, with perfect little noses, tiny toes, dainty fingers and finger nails, and most of all, beautifully lovable faces.

“We held them. We had time to study them, and we really felt like we got to know them a bit,” Jason said.

By now, extended family had arrived at the hospital to support Jason and Marie and to help bid farewell to the three children. A nurse took the babies’ footprints. The children were fitted with little hats and wrapped in coloured garments.

For Marie, it was an impossible mix of emotions: “We just held the babies. We cried. We looked at them. We studied them. We talked to them. We baptized them. And…we loved them.”

Bernadette, Adam, and Christine were loved, respected, and cherished for every moment of their short four-hour lives.

Immediately after their children’s passing, Jason and Marie wondered what should be done with the remains. They wondered if the hospital would let them have the bodies.

Marie’s father came to the rescue: “Of course we must give them a proper funeral,” he said. “They lived a life, just like anybody else. They were born, they were baptized, they lived, and they died.”

Marie’s brother built a little wooden casket with three crosses on the top. The children who had grown, lived, and died together, would now be laid in their final resting place together.

Jeff Gunnarson of Campaign Life Coalition attended the funeral service. He told LifeSiteNews that he was “deeply moved” to hear Jason’s graveside testimony about the life of his children, adding that there was hardly a dry eye in the crowd.

“Jason explained to the people gathered that his children’s lives were precious,” he said. “He mentioned his daughters’ dainty fingernails and the beautiful curve of his boy’s tiny chin. He said that even at such a young age, each child already showed distinct personality traits. He conveyed that each had its own unique unrepeatable life.”

“Believe me, anyone in that crowd with a hint of indifference to the value of a baby’s life at 22-weeks would have left that service re-thinking a pro-choice position. Jason conveyed just how wonderfully-made are these little human children of God. He was able to see in this serious, sad, yet profound moment of burying his beloved children a pro-life ray of hope that brought tears to our eyes and made us grateful to have witnessed so great a love.”

A Testimony to Life

Like any parents who have had to bury their children, Jason and Marie find themselves asking “why”. On blacker days, they find themselves prayerfully wrestling with God, asking him why he allowed this pain, this grief, this suffering, this loss.

Marie’s worst moment was waking up in the middle of the night directly after her loss. As the preceding nightmarish events crashed heavily upon her, she suddenly realized that she no longer was pregnant. “I really felt the despair when I asked myself how could anything good possibly come out of this,” she said.

The parents found themselves turning to their faith, seeking answers to difficult questions.

“We don’t know why we didn’t get to keep them,” said Marie, “but for whatever reason, God allowed them to be taken from us. We have faith that they are now in heaven reaching down trying to pull the two of us to heaven to be with them. We believe that we have three little angels up there who are interceding for us, so that we will get there someday, too.”

Instead of focusing on their loss, the parents decided to focus on their blessings. “If anything, these babies are a testament to life. That’s what they have to be. That’s what we have to make this,” said Marie.

Despite their pain and loss, the parents would never wish their children’s lives away. They know that pain and loss do not have the final word.

The triplets have already made a difference in the lives of all who knew about them. Neighbors came together to support Jason and Marie. Family members saw through their petty differences and found common ground. Faith in God and family ties were strengthened. Cold hearts were thawed.

“Somehow it changes a heart just to see their lives,” said Jason.

Jason and Marie’s “hope and prayer” is that sharing their experience might “encourage” others who face difficult life choices.

They have put together a moving video tribute in memory of their triplets. The parents wrote and recorded an uplifting and heartfelt song that accompanies their story, which is told through photos and texts. The YouTube video has already received close to 3,500 views.

“Hopefully our babies lives can make a difference somehow, even if it’s just giving strength and affirmation to people currently in the pro-life movement,” said Jason.

Gunnarson called the Taylor’s testimony “courageous and amazing,” saying that they showed the world that bringing 22-week babies into the world, even if they are not able to live for more than a few hours, is the “natural, healthy, and loving thing to do”.

“They named them, they baptized them, and most importantly,” he said, “they loved them.”

For Jason and Marie, their children will forever remain a treasured memory. Anyone who listens to their story will hear them say: “We were blessed to have met them.”

See Footsteps – In Memory of our Triplets on Youtube.

Editor’s note: This article originally appeared on LifeSite News, and it is reprinted here with permission.