The loss of a preborn child can be one of the most heartbreaking events a woman ever experiences – whether that loss is from miscarriage or abortion. A stigma still largely surrounds both: mothers who have suffered miscarriages, as well as women who regret their abortions, feel they must carry their burden in silence and shame. Yet women are increasingly speaking up about their miscarriages — and inexplicably, this has led abortion advocates to begin exploiting this pain, using the trauma of miscarriage as a way to fight for unrestricted abortion.

Writing for “Romper,” Jane Kirby told the story of her own miscarriage, and how heartbreaking it was for her. “Devastated, my partner and I spent the next couple of days trying to adjust to our new reality: That the family we had been imagining for the last two and a half months was not to be,” she explained. “We reached out to friends and family members, and while all offered their condolences, no one really knew how to talk about what had happened or how to offer support.” Her experience was only made worse by seemingly substandard medical care, and a lengthy process of actually completing the miscarriage. “All in all, the physical process of miscarrying lasted almost six weeks,” she said. “My emotional recovery, however, took many months longer.”

Kirby also noted that, during her miscarriage, she realized how poorly women experiencing pregnancy loss are treated. This, however, only led her to feel even more compelled to advocate for abortion. “Miscarriage and medication abortions can both be physically similar to experiences of labor and birth, but rather than being prepped by childbirth classes and supported by doulas, midwives and doctors, most people going through this are expected to endure the process at home and alone,” she argued.

READ: If we are mourning miscarried babies, we should be mourning aborted babies too

She continued, “While I’d like to think that, in a post-Roe v. Wade era, unsafe abortions are a thing of the past, an array of conditions — a lack of providers, the high cost of the procedure, lack of insurance coverage, and a complicated patchwork of regulations across states — mean that many people in the United States still lack access to safe, legal abortions.” Kirby then spoke about how awful pregnancy can be, and how women shouldn’t be forced to go through that experience if they don’t want to. “At the best of times, pregnant people experience nausea, hormonal mood swings, and a host of bodily changes. Being pregnant can strain relationships, hurt careers, and cause mental and emotional distress. Labor and birth are notoriously painful and exhausting experiences,” she wrote, adding, “[A]ttempting to force them to endure these hardships for some abstract and very black and white idea of what constitutes life is simply cruel.” However, when life begins is not abstract. It’s a scientifically proven fact that life begins at fertilization.

Kirby finally concluded that miscarriage should go hand-in-hand with abortion, saying, “[R]ather than see these as contradictory efforts, I think it makes more sense to frame both as important events in women and pregnant people’s reproductive lives.”

The problem with conflating miscarriage and abortion comes down to the abortion movement’s favorite word: choice. Miscarriage is not even remotely in the same realm as abortion, because abortion is a choice. It is a choice that, admittedly, more than 73 percent of post-abortive women are pressured and coerced into, a choice in which they feel they have no other option, and a choice that many women regret. But it is still a choice. It’s not an event that randomly happens to women during pregnancy. And while this is not a new tactic — trying to make abortion and miscarriage similar issues — it is grossly offensive, as even pro-abortion advocates have pointed out. “Hey, I’m pro-choice, but I also lost a son at birth, and had a miscarriage, and that was f***ed up nature doing it, not God,” one woman tweeted when an abortionist tried to compare miscarriage and abortion. “Please don’t make this argument.”

When Planned Parenthood likewise made this distasteful comparison, they too received an avalanche of criticism from people who found it offensive. 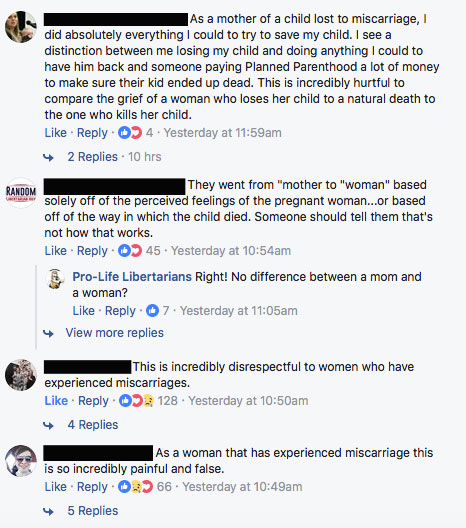 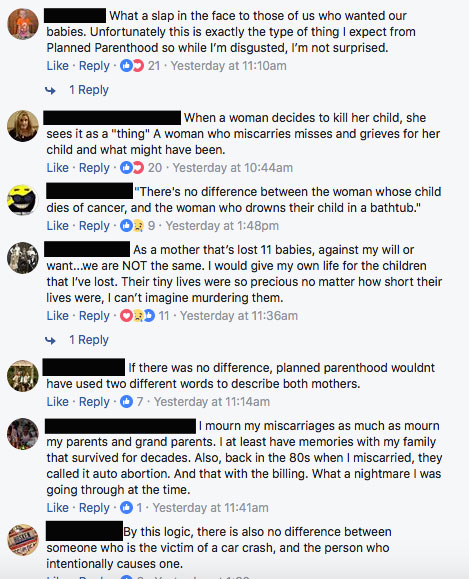 Turning miscarriage into, essentially, a tool to promote abortion is cruel. And to make it worse, abortion is something that further hurts women experiencing miscarriage, by adding to its lingering stigma. Women who have undergone abortions deserve compassion and the chance to heal. But a woman who chose abortion is in no way the same as a woman who suffered a miscarriage. And the latter should not be exploited to help the former.