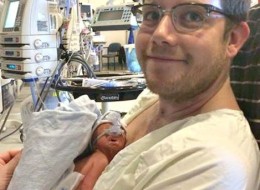 Dylan Benson has just met his son, under circumstances that make baby Iver’s birth both glorious and heart-wrenching.  The 28-week old baby emerged weighing 2 lbs, 13 oz, to a young mother whose eyes would never open to see any of her little boy’s first moments.

Seven months ago, Robyn became was the vibrant wife of Dylan, and shortly thereafter, a glowing new mother, when it was discovered she was carrying their first child.  Then, three days after the couple celebrated their first Christmas together, on December 28th, Robyn began vomiting and experienced a severe headache.  Dylan headed for the store to purchase a bottle of Tylenol, and returned to find his young wife unconscious on the bathroom floor.

A battery of tests confirmed a severe brain hemorrhage, unable to be overcome even with emergency surgery to drain the blood flooding Robyn’s brain, and doctors informed the young husband that his wife was brain dead, and could not recover.  Then they offered the miracle – to keep Robyn’s body alive on life support, for as long as possible, to give his unborn son a chance at life.

There was no guarantee, Robyn was only 22 weeks pregnant at the time, and her body could fail at any point despite the most innovative of medical technology, but it was a chance to bring life even out of death.  Dylan took it, and raised the funds himself to cover the immense cost of saving his son’s life and obtaining leave from work so he could spend the last few precious weeks at the hospital with his wife and unborn child.  As funds poured in far beyond what Dylan had even requested, Robyn hung on, and Iver grew stronger.

Six weeks after that terrible day, on Saturday, February 8th, Iver Cohen Benson entered the world via c-section, and his beloved mother left it 24 hours later.  “I don’t think I have the right words to describe it,” Benson said in an interview on Monday. “It’s the best and definitely the worst thing to ever happen to me in my life at the same time.”

Iver is in good health and strong enough to be held by his father, though expected to spend a number of weeks in the NICU as he continues to grow and develop.  The process of healing and grieving, and becoming a widower and single father, will no doubt be a long one, but the impact of Robyn Benson’s life, her husband’s incredible choice, and Iver’s rescued life, cannot be underestimated.  In the most heart-wrenching way possible, it screams a message of love and worth, in a culture so often all too willing to discard both the injured, and the unborn.

If you desire to help Dylan with the financial needs that accompany being a single father, donations can be made at the Youcaring page which has been set up.