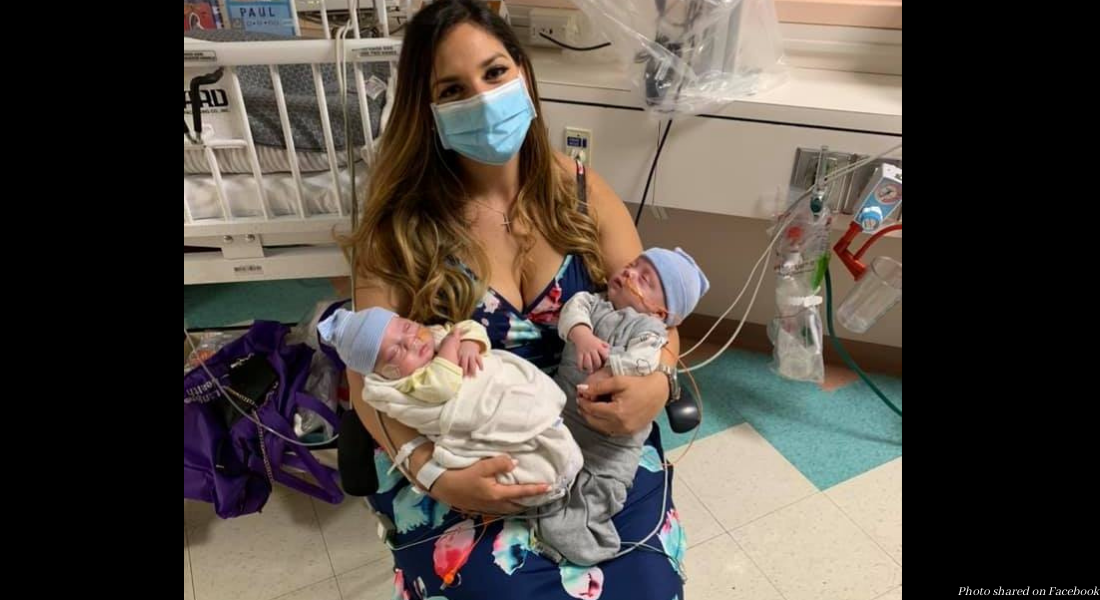 A pair of twins from New York have overcome incredible odds and are home with their family, having beaten numerous dangers and complications. Vince and Pauly Salmonese are finally home with their parents, Dana and Joe, in Huntington, New York, after surviving Twin to Twin Transfusion Syndrome (TTTS), a premature delivery, and a NICU stay — all during the COVID-19 pandemic.

Shortly after announcing their twin pregnancy on Facebook, Salmonese said she woke up to severe bleeding. “I thought I had lost them. It was the scariest moment of my entire life,” she said in an interview with PEOPLE. “There was no doubt in my mind that I was miscarrying.” After rushing to the hospital, Salmonese received an ultrasound, where she was diagnosed with a subchorionic hematoma. Her babies were given a 50/50 chance of survival, and Salmonese was put on bed rest. By 17 weeks, she had stopped bleeding, and was able to pick up their daughter, Gianna, again. “I was excited to have a normal pregnancy from there on out, but it didn’t happen that way,” she said.

Salmonese told TODAY that she was diagnosed with TTTS after another ultrasound. TTTS is a rare condition where both twins share the same placenta, and one twin receives more nutrients than the other, putting their lives at risk.

“I was looking at the monitor, and I’m noticing that one wasn’t moving, one was looking like he didn’t have much room at all, and he was still,” she said. “The other one was floating and he had all this room, and his arms were up and kicking all over and I couldn’t feel any of it. And I thought that was kind of weird.”

Her OB/GYN immediately made her an appointment with Dr. Martin Chavez at NYU Winthrop Hospital. Chavez explained that he would perform a laser photocoagulation surgery while the twins were still in the womb the very next day. “What was happening is that one was getting too much blood and one was not getting enough, so we use a laser to close these abnormal connections, allowing the pregnancy to continue as far along as possible, and as safely as possible,” Chavez told PEOPLE.

Without the surgery, Salmonese was told her twins had just a 10% chance of survival. “I knew I had to do it. There was no doubt in my mind,” Salmonese said. “It’s risky to go into the womb with 18-week-old babies, but it would be even more risky not to.”

READ: Giving preborn twins with a rare disorder the lifesaving chance they deserve

The surgery was successful. But just two weeks later, there was another complication: Salmonese’s water broke at 20 weeks pregnant. “It was a big gush, and I thought I lost them all over again,” she says. “I thought, ‘This is it, I’m delivering 20 week old babies.’” Though Salmonese wasn’t having contractions, she told TODAY that she feared her babies weren’t going to make it. “I thought I was giving birth to two babies that were not going to be able to get help and would have to die in my arms,” she said. “And I was scared. It was the scariest moment, I think, of my life.”

In the midst of all of this, the COVID-19 pandemic was raging through New York, and the maternity ward was being turned into an area to treat COVID-19 patients. Salmonese was sent home, on bed rest once again. She was constantly monitoring her temperature to make sure she wasn’t developing an infection, and her husband was having to take extraordinary measures to make sure he didn’t spread anything to her.

“Joe is a first responder, so he was going on call as a firefighter and seeing COVID every day, transporting people that couldn’t breathe,” she told PEOPLE. “He would get home and take off all of his clothes, his boots, everything, after a shift, and fearing that he would bring it home to me. It was overwhelming for him.”

She knew she needed to make it to 24 weeks, which is often seen as the point of viability, although babies have survived at younger ages. Friends and family put signs outside of their house to lift her spirits, and when she reached 24 weeks, they celebrated with a drive-by parade, complete with fire trucks from her husband’s station. By 28 weeks, the pandemic was dying down a bit in New York, so Chavez allowed her to check back into the hospital once she started having contractions again. Still, they were able to keep the babies safe in her womb until she reached 31 weeks, when they decided to move forward with the delivery. “I kept saying “It’s mommy, it’s mommy, I couldn’t wait to meet you,” she told TODAY.

Both babies needed to be placed on oxygen and were taken to the NICU. “After everything they went through, they needed a lot of respiratory support, and they needed blood transfusions,” Salmonese told PEOPLE. “But those doctors and nurses, they really know what they’re doing. They are geniuses and they know how to push your babies without pushing them too hard.”

Vince was able to go home in August, and the boys had been kept in separate rooms. But in September, they were finally reunited and able to be at home together, as one happy family. “They were not supposed to live,” Salmonese said. “They had a 10 percent chance to live and they did it. They fought through it … our miracle baby fighters.”